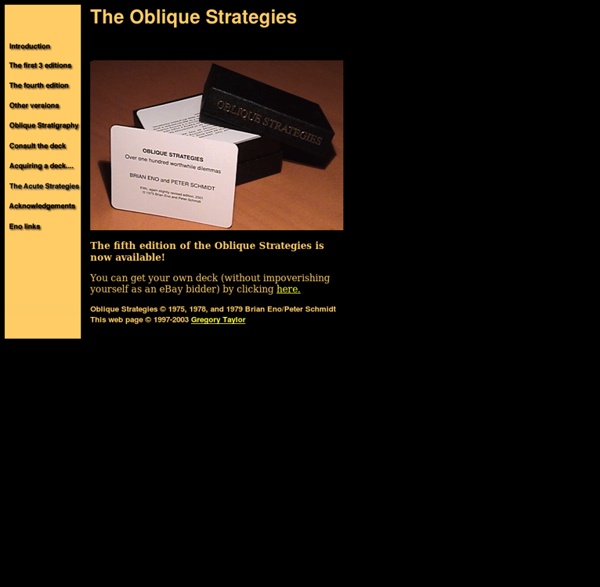 OSMOS Guide Have you ever had one of those dreams where you are floating around in space, slowly grasping at random objects as they pass by, with no real direction? It should be frightening, but instead you feel a level of calm serenity that you've never felt before. Okay, maybe that's just me, but it is not unlike the feeling that you get when you play Osmos, the award-winning game from new indie developers Hemisphere Games. The main goal in Osmos is simple: you, an amoeba-esque organism known as a "mote," must absorb smaller motes to become bigger. As you proceed through the levels of the game, you will run into different objectives. The orbital levels really show off the mathematical prowess of the game. Later levels are definitely more complex and not necessarily quite as relaxing as the early levels, although it all comes together with a stunning ambient electronic soundtrack that makes even the most frantic of games a soothing breeze on the wind.

Facilitation Card Decks Edit: February, 2014. If you are interested in facilitation decks, see also these posts: Edit: January 6, 2012 – Just out, this great deck on process patterns. groupworksdeck.org – I’ll be blogging about them soon, but want to attach this URL to this blog post as it seems to get a lot of hits! I love things you can touch and play with when facilitating face to face. This is probably why I was so attracted to the “drawing on walls” involved in graphic facilitation, kinesthetic modeling and just plain PLAY as a way to work together. I have a stack of different card decks that have been created for various purposes that I use. IDEO Method Cards I’ve been using these cards for years and in almost every way except as design method cards. When I need to help a group jump out of a rut or jumpstart thinking, we pull out the images and do word association just to get the mental juices going. The cards themselves are expensive ($49 USD). Like this:

IGN Review "Ambient games" might not yet be a prominent videogame genre, but more and more of these tranquilizing experiences are popping up on the indie scene. It's a term Hemisphere Games' Eddy Boxerman uses to describe slower-paced games like flOw, Crayon Physics, and his own Osmos. You won't find any twitchy shooting mechanics, frantic timed events, or macho posturing heavy metal here. Your goal in each stage is to become the big fish in the pond. These motes are delicious! Osmos starts you out at a Biology 101 level, but later stages can definitely get hectic as more aggressive motes are introduced and environmental hazards get in the way of evolution. The primordial ooze that makes up Osmos is brilliant to look at, full of glowing orbs lazily floating amidst the soup. The Verdict The small team at Hemisphere has crafted an alluring, captivating experience that is a nice change of pace from the frantic action videogames often provide. IGN Ratings for Osmos (PC) Great (out of 10, not an average)

The Group Works Card Deck | Group Works Get It Now The printed deck is available now for US $35 per deck (plus shipping), or US $25 per deck if you order 10 or more decks. You can also view and download PDFs of the full deck and booklet free of charge. What's Included: The Group Works card deck is designed to support your process as a group convenor, planner, facilitator, or participant. The people who developed this deck spent several years pooling our knowledge of the best group events we had ever witnessed. The deck consists of 91 full-colour 3.5" x 5.25" cards (plus a few blanks to add your own patterns), a five-panel explanatory insert, and an accompanying booklet explaining the purpose and history of the project and suggesting uses for the cards in group process work. Each card is laid out as follows: How to Use the Cards Ideas for how to use the deck are limited only by your imagination. There are specific ideas outlined in the Activities section. Community Questions? Contact us.

Strategic Acquisitions I have some good news for you, and then some bad news. The good news is first. There is a fifth edition of the Oblique Strategies that you can purchase without bidding usurious amounts at auction, as was previously the case. Click here for more details. What other kinds of Oblique Stragegies decks can I acquire? While the chances of finding an earlier deck of the Oblique Strategies for purchase may remain slim (more on this later), you can avail yourself of a virtual copy with some ease. There are resourceful netizens who have produced nice javascript and Shockwave versions of the deck, too. I've included a virtual copy for the deck for use and edification of our Mac and Windows-using readers. Here's a Mac OS hyperstack version to download and unpack. Okay. As you already know, there were initially three editions of the Oblique Strategies produced and offered for sale through Eno and Opal in the late 1970s. So far Oblique Strategies has been published, privately, on three occasions.

BBC Learning Design Toolkit You can find links to the BBC learning design toolkit and booklet below: Learning Design Introductory Booklet Learning Design Toolkit Cards Towards the end of 2008 we began to realise that whilst learning was changing all around us, ways of thinking and behaving were not. Mindful of some big projects on the horizon, we decided that we should look again at learning – considering it afresh - and as an experience rather than a set of conventions. The research method was unconventional: we wanted insights into the lives of our learners; the things that had affected them most deeply, and into the resources and techniques that they use informally – strategies which are integrated into their everyday lives. The research used a number of in-depth techniques: interviews with experts, one, two and three week diaries. Based on our findings we began the construction of the Learning Design Toolkit – an iterative process involving a range of people over a period of some months.

Brains, Behavior & Design These reference cards are helpful when becoming familiar with basic behavioral economics concepts. This tool is by no means a complete or comprehensive collection of all behavioral economics concepts; they are a selection meant to provide enough depth and coverage to help establish a foundation. Terms on the reference cards are categorized into four decision-making factors and four decision-making shortcuts. Each category includes an index card that provides an overview of the category and suggestions for related design strategies. Introduction to Reference Cards All Reference Cards top

radiOM.org SILK For the past couple of years we've been working on the Kent Dementia Friendly Communities project. Covering the whole of Kent the project has inspired local community projects and dementia action alliances to form. The past few months we've been hard at work creating a website that captures all the activity that has happened under the Kent Dementia Friendly Communities project. The site is not finished, in the future we hope it will be updated by the local alliances and project teams to continue to share the work they are doing, inspiring other communities along the way. We're still editing and adding to the site so if anyone has any comments please do get in touch. 77 Million Paintings Thank you to all who attended the event, and especially our members who made it all possible. The Event The Long Now Foundation presented the North American Premiere of Brian Eno's 77 Million Paintings for 3 days at the Yerba Buena Center for the Arts in San Francisco. Friday and Saturday evening were absolutely packed with nearly 800 and 1000 attendees, respectfully. Sunday was the Long Now members evening. We were a bit surprised to find that the big crowd for each evening came right at the opening time, leaving the late night crowd with the installation much to themselves. The Sunday evening members event was a nice change of pace with a few hundred less people who were as much into mingling as seeing the piece, giving the party area and the installation a nice balance of people. A parallel event was also run in Second Life organized by Blueair.tv and built by Annabeth Robinson. The Art

BellStudies CD "...this album changes the flow of personal time...a meditative, expansive world unfolds with no limits on the imagination." -CD Baby Brian Eno created this album both as a tribute to Long Now, and as an artistic expression of the vast swathes of time represented by the sheer "long-termness" of the philosophy behind the 10,000 Year Clock. "When we started thinking about The Clock, we naturally wondered what kind of sound it could make to announce the passage of time. The sounds on the album are entirely synthesizer-based, although Eno studied the actual physics of bell tones in order to simulate the kinds of bells familiar to modern ears. Available for purchase through CDBaby. AmbientMusicGuide.com - A Guide To Essential Ambient & Downtempo