View Page. This was not the strange death of Liberal England, just implosion of the Lib Dems. That it didn’t go to Labour is Ed Miliband’s fault. 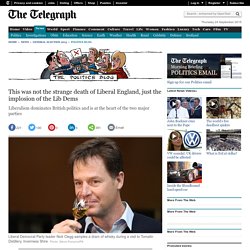 He had moved a little too far to the Left without persuading the country on why it should follow him. By contrast, Tony Blair’s landslide victories had a lot to do with pandering to the liberal consensus. Blair’s appeal was much the same as Cameron’s: capitalism with a social conscience. Both men are liberal in economics (a lightly regulated free market with a social safety net) and social policy (tolerant but not libertarian). That Blair and Cameron, the two most successful leaders of the last quarter century, are liberals in all but name suggests that a moderate majority exists in Britain. Amazing: just gone over 2,000 members who have joined #LibDems today - one every few seconds. A significant minority, however, are increasingly anti-liberal. People have good reason to be dissatisfied with the liberal consensus. If the Lib Dems have a future, then it lies in rescuing liberalism from itself. General Election 2015: the key moments.

Tim Farron: Is it all over for this classical liberal wing of the Lib Dems? - Jane Merrick - Commentators - The Independent. Remember when orange really was the new black? 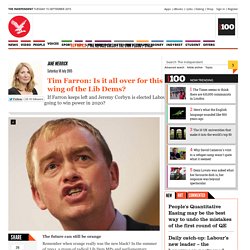 In the summer of 2004, a group of radical Lib Dem MPs and parliamentary candidates contributed to a collection of essays designed to drag their party to the centre ground and make it a grown-up, credible partner in a government by proposing greater choice and market solutions in public services. It was The Orange Book and its authors included Nick Clegg (not then an MP) and Vince Cable. Six years later when David Laws, one of the book’s editors, brokered the deal with the Conservatives to form a coalition, the project was complete. But now that Tim Farron has defeated Norman Lamb, the candidate who came closest to The Orange Book mission, is it all over for this classical liberal wing of the Lib Dems?

In his victory speech, Farron said he wanted to bring the “millions” of liberals in Britain into the Lib Dems but his politics are closer to the old SDP element of the party. Britain is a “small l” liberal country. Boris Johnson Off the rails. Is Britain still liberal? It is great to see that you are enjoying the Prospect website. 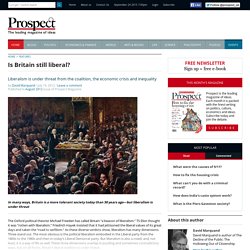 You have now reached your allowance of 3 free articles in the last 30 days.Don’t worry—to get another 7 articles absolutely free, just enter your email address in the box below. You are in complete control of which 7 articles you choose to read. Register now to enjoy more of the finest writing on politics, economics, literature, the arts, philosophy and science. When you register, we’ll also send you our free Blueprint for Britain e-book which considers how the nation should now run itself AND we’ll send you our free weekly newsletter.

(If you prefer not to receive the newsletter you can unsubscribe at any time). Prospect takes your privacy seriously. Nick Clegg and British liberalism: revival, betrayal, or repositioning? The Liberal Democrats’ rightward shift in the decade since The Orange Book has helped make the Cameron-Clegg coalition possible. 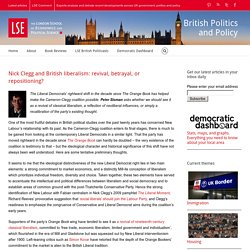 Peter Sloman asks whether we should see it as a revival of classical liberalism, a reflection of neoliberal influences, or simply a recalibration of the party’s existing thought. One of the most fruitful debates in British political studies over the past twenty years has concerned New Labour’s relationship with its past. As the Cameron-Clegg coalition enters its final stages, there is much to be gained from looking at the contemporary Liberal Democrats in a similar light. That the party has moved rightward in the decade since The Orange Book can hardly be doubted – the very existence of the coalition is testimony to that – but the ideological character and historical significance of this shift have not always been well understood.

Here are some tentative preliminary thoughts. What today is called ‘economic liberalism’ is not Liberalism at all. About the Author.