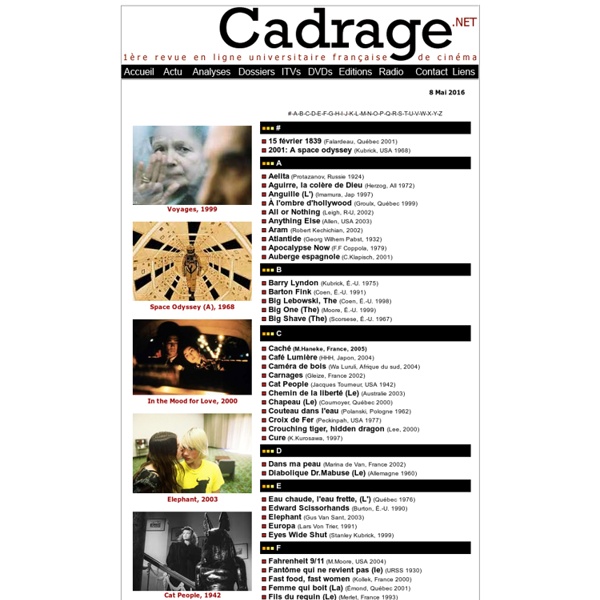 Zhang Daqian Zhang Daqian or Chang Dai-chien (Chinese: 張大千; May 10, 1899 – April 2, 1983) was one of the best-known and most prodigious Chinese artists of the twentieth century. Originally known as a guohua (traditionalist) painter, by the 1960s he was also renowned as a modern impressionist and expressionist painter. In addition, he is regarded as one of the most gifted master forgers of the twentieth century. Background[edit] Chang was born in 1899 in Sichuan Province to a financially struggling but artistic family.

The Art of Aaron Blaise Welcome! My name is Aaron Blaise and I've been an animator, director, illustrator, and fine artist for over 30 years. Here I've decided to create a channel enabling me to share my art and art techniques with you, the viewer. Please explore my site and have fun, because that's what art is all about. 16 Free 3D modeling software to create your own 3D models at no cost There are many professionnal oriented and totally free softs to help you If you want to create a 3D model of a modern space-craft, an animated monster, an entiere world or a tiny bunny ! Look at this picture above ! Everything has been done with an easy to use 100% free soft ! Here is a list of the 16 most usefull FREE 3D modelers softwares you can find on the web. All of them are totally free, some are also open source.

SUNDAYS - article What would you do with $50,000? Pay a few bills? Buy a new car? Maybe some overpriced Champagne? Or, perhaps create an exceptional Science-Fiction short that got most of Hollywood demanding more? Dutch filmmaker Mischa Rozema did the latter, after raising some big bucks on Kickstarter for his short film SUNDAYS. Smarta Tradition Smartha Sampradaya (Sanskrit, meaning Smartha Tradition) is an orthodox[web 1] Hindu "family tradition"[web 2] or sect composed of Brahmins, c.q. "[a] certain category of brahmins",[web 2] which follows Shanmata. The term Smārtha is used to denote a specific, specialized category of Brahmins, who specialize in the smriti,[web 2] c.q. who hold the smriti as the most authoritative texts. Generally Smartas worship the Supreme in one of five forms: Ganesha, Siva, Sakti, Vishnu, and Surya. Because they accept all the major Hindu Gods, they are known as liberal or nonsectarian.

Advaita Vedanta Advaita Vedanta[note 1] is a sub-school of the Vedanta[note 2] school of Vedic or Hindu philosophy[5] and religious practice,[web 1] giving "a unifying interpretation of the whole body of Upanishads". The principal, though not the first, exponent of the Advaita Vedanta-interpretation was Shankara Bhagavadpada who systematised the works of preceding philosophers. Its teachings have influenced various sects of Hinduism. The key source texts for all schools of Vedānta are the Prasthanatrayi, the canonical texts consisting of the Upanishads, the Bhagavad Gita and the Brahma Sutras, of which they give a philosophical interpretation and elucidation. Advaita developed in a multi-faceted religious and philosophical landscape. The tradition developed in interaction with the other traditions of India, Buddhism, Vaishnavism and Shaivism, as well as the other schools of Vedanta.

The Art of Equalization The Art of Equalization by Ethan Winer (This article first appeared in the August 1979 issue of Popular Electronics magazine.) A growing number of audio enthusiasts are using equalizers to adjust their stereo system's frequency response, whether to compensate for room acoustics or for creative recording purposes. Facial Action Coding System Muscles of head and neck. Facial Action Coding System (FACS) is a system to taxonomize human facial movements by their appearance on the face, based on a system originally developed by a Swedish anatomist named Carl-Herman Hjortsjö.[1] It was later adopted by Paul Ekman and Wallace V. Friesen, and published in 1978.[2] Ekman, Friesen, and Joseph C. Hager published a significant update to FACS in 2002.[3] Movements of individual facial muscles are encoded by FACS from slight different instant changes in facial appearance.[4] It is a common standard to systematically categorize the physical expression of emotions, and it has proven useful to psychologists and to animators.