Astronomy of the Brazilian Flag. Lesson plan ideas for Brazil Culture Study on Pinterest. Brazil Country Profile. Lara1. National Geography Standard Index - National Geographic Education. “The world facing the high school graduates of 2025 will be even more crowded than the world of today. 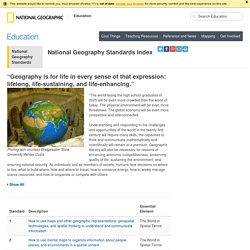 The physical environment will be even more threatened. The global economy will be even more competitive and interconnected. Understanding and responding to the challenges and opportunities of the world in the twenty-first century will require many skills; the capacities to think and communicate mathematically and scientifically will remain at a premium. Geographic literacy will also be necessary for reasons of enhancing economic competitiveness, preserving quality of life, sustaining the environment, and ensuring national security.

As individuals and as members of society, humans face decisions on where to live, what to build where, how and where to travel, how to conserve energy, how to wisely manage scarce resources, and how to cooperate or compete with others. Show All —Geography For Life: National Geography Standards, Second Edition. Unique fishing sailboat, Rio Grande do Norte, Brazil. Smithsonian Folkways. Download a PDF of this lesson plan Summary Performance videos and live recordings immerse students in this musically and visually exciting tradition from Brazil. 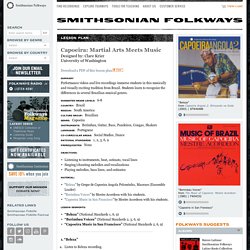 Students learn to recognize the differences in several Brazilian musical genres. Smithsonian Folkways. Download a PDF of this lesson plan Summary Immerse yourself in the lively mood of Samba and Carimbo. 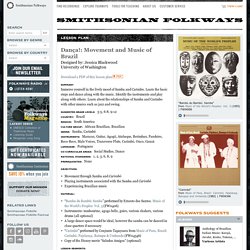 Lesson Segments: Smithsonian Folkways. Download a PDF of this lesson plan Summary ‘Embolada” is a form of poetry and song that has set refrains. 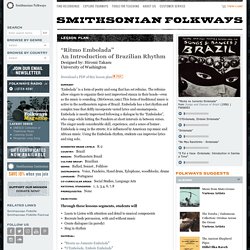 The refrains allow singers to organize their next improvised stanza in their heads—even as the music is sounding. (McGowan,1991) This form of traditional music is active in the northeastern region of Brazil. Embolada has a fast rhythm and complex tone that deftly incorporate varied lyrics and onomatopoeia. Embolada is mostly improvised following a dialogue by the “Embolador”, who sings while hitting the Pandeiro at short intervals in between verses. 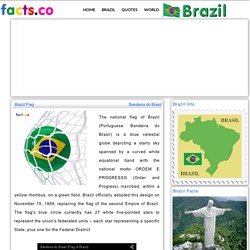 Brazil officially adopted this design on November 19, 1889, replacing the flag of the second Empire of Brazil. The flag's blue circle currently has 27 white five-pointed stars to represent the union's federated units – each star representing a specific State, plus one for the Federal District Brazil Flag - Colors - meaning and symbolism Green represents the forests of Brazil Yellow rhombus symbolizes Brazil's mineral wealth Blue circle and stars depict the sky over Rio de Janeiro at 8:37 A.M. on 15 November 1889 - the day the Republic of Brazil was declared Brazil Flag facts The Brazil National Flag was designed by Raimundo Teixeira Mendes. 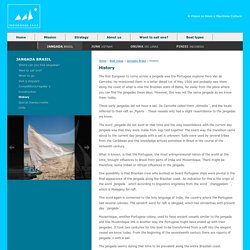 He mentioned them in a letter dated 1st of May 1500 and probably saw them along the coast of what is now the Brazilian state of Bahia, far away from the place where you can find the jangadas these days. However, this was not the same jangada as we know them today. These early jangadas did not have a sail. De Caminha called them ,Almadia´, and the locals referred to their raft as ,Piperis´. These vessels only had a slight resemblance to the jangadas we know. The word ,jangada did not exist at that time and the only resemblance with the current day jangada was that they were made from logs tied together. Loja virtual da Editora do Brasil.