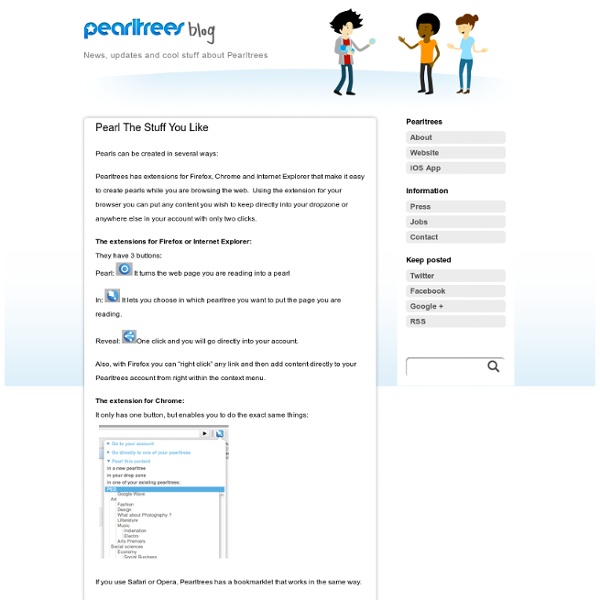 Pearls can be created in several ways: Pearltrees has extensions for Firefox, Chrome and Internet Explorer that make it easy to create pearls while you are browsing the web. Using the extension for your browser you can put any content you wish to keep directly into your dropzone or anywhere else in your account with only two clicks. The extensions for Firefox or Internet Explorer: They have 3 buttons: Pearl: It turns the web page you are reading into a pearl In: It lets you choose in which pearltree you want to put the page you are reading. Reveal: One click and you will go directly into your account. Also, with Firefox you can “right click” any link and then add content directly to your Pearltrees account from right within the context menu. The extension for Chrome: It only has one button, but enables you to do the exact same things: If you use Safari or Opera, Pearltrees has a bookmarklet that works in the same way. Create pearls with Facebook and Twitter From the links you tweet!

티티 Lucidly Drupal: Setting up Ubuntu 10.4 Lucid LAMP stack for your Drupal site | PINGV Creative Blog [Update: We've recently posted steps for setting up Ubuntu 12.04 Pangolin for Drupal 7.] We're frequently setting up servers for development, for staging, for production. I've lately preferred the Debian flavor of Linux, but up until now that had been something of a problem because Debian and Ubuntu did not include the higher-quality php5-gd library, which meant that you either had to compile your own PHP, pull from an alternative source host, or cope with substandard image resizing with limited processing features. But now we have Ubuntu 10.4 LTS "Lucid" and life is good. Lucid comes with PHP 5.3.x and the proper GD2 library! (Cheers. Still, there's a lot of little steps to set up to get your server (or virtual private server) up and running and ready for Drupal. [Edit: Brian also pointed me to Taskel as another way to go. Drupal requires some things, and likes some other things a lot. Assumptions Step by Step And that's it. I am not a sysadmin by profession. Update: Clean URLs problem?

HOWTO: Node Listings with Thumbnails using Drupal 5.1, CCK and ImageCache I needed to apply the concepts outlined at to create a listing of node teasers that contained thumbnail images. That article was written for 4.7 and was useful, but not completely helpful for Drupal 5.1 which I am running. Here's a way to create a teaser list with thumbnails ... keep in mind I am also not a Drupal expert, but a Drupal learner. Note: Currently (4/17/2007), the ImageCache module only works when the "Download method" setting in Drupal's site configuration is set to "Public." Install the Modules You will need to install and enable the following modules: Configure Imagecache The imagecache settings are at (replace example.com with your domain). Enter a name in the Preset Namespace field and click the Create Preset button. Modify the Node Type with CCK This example is modifying the Blog node so navigate to Create Content and Upload an Image Create a Module

970281 613730171985001 1277987051 n 1 ui Hacker says he broke into Texas water plant, others | InSecurity Complex A twentysomething hacker said today that he hacked into a South Houston water utility to show that it can easily be done, after U.S. officials downplayed the risks from a report yesterday of an intrusion at an Illinois water plant. The hacker, using the alias "pr0f," said he has hacked other SCADA (supervisory control and data acquisition) systems too. He tweeted on November 5 links to public posts with what he identified as PLC configurations for a Polish waste-water treatment plant; SCADA data from an HMI (human-machine interface) box possibly for a generator used for research purposes at Southern Methodist University; and what he believes are water metering control system files from Spain or Portugal. "Basically, people have no idea what's going on in terms of industrial control, groups like ICS-CERT (Industrial Control Systems Cyber Emergency Response Team) are too slow/don't have enough power to react to situations," he wrote in an e-mail to CNET. That government response irked pr0f.

Iran hijacked US drone, engineer claims - World news - Christian Science Monitor ISTANBUL, Turkey — Iran guided the CIA's "lost" stealth drone to an intact landing inside hostile territory by exploiting a navigational weakness long-known to the US military, according to an Iranian engineer now working on the captured drone's systems inside Iran. Iranian electronic warfare specialists were able to cut off communications links of the American bat-wing RQ-170 Sentinel, says the engineer, who works for one of many Iranian military and civilian teams currently trying to unravel the drone’s stealth and intelligence secrets, and who could not be named for his safety. Using knowledge gleaned from previous downed American drones and a technique proudly claimed by Iranian commanders in September, the Iranian specialists then reconfigured the drone's GPS coordinates to make it land in Iran at what the drone thought was its actual home base in Afghanistan. More world news from the Christian Science Monitor Rock Center: Iran's growing influence in Iraq Gen.