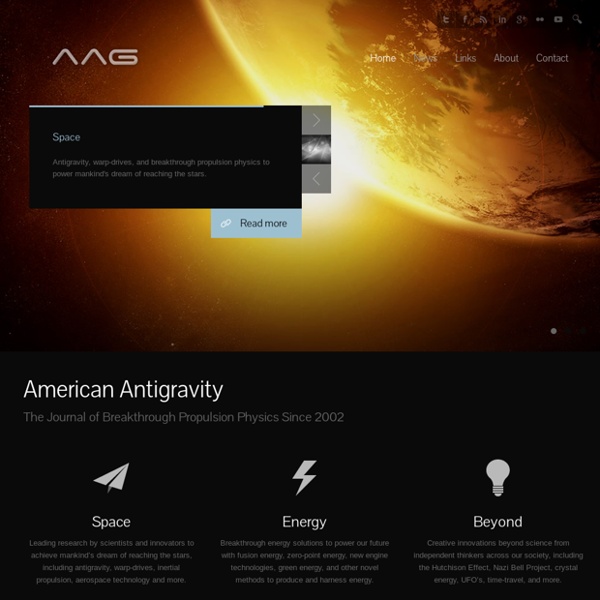 Keshe Foundation From PESWiki Page first featured July 19, 2009 Plasma Energy and Anti-Gravity Applications "The Keshe Foundation is an independent non-profit and non-religious organization founded by nuclear engineer M.T. Spacecraft Propulsion Device Invented by 19-year Old Student By: Amanda Froelich, True Activist. With passion to persevere and see a project succeed, anything is possible. This is certainly true for a young student in the Middle East.Aisha Mustafa, a 19-year old female student from the University of Sohag in Egypt, recently developed a new type of propulsion system for space crafts. Her newly patented invention uses cutting edge quantum physics instead of thrusters, and is an innovative design that may radically change a more than one field.

Scientists Use Sound Waves To Levitate And Manipulate Matter April 8, 2014 - A team of researchers in Switzerland have developed a way of levitating and transporting small objects using nothing but sound. Using ultrasonic waves that is, sound waves whose frequencies are too high for humans to hear, scientists at the Swiss Federal Institute of Technology in Zurich have made water droplets, instant coffee crystals, styrofoam flakes, and a toothpick, among other objects, hang in mid air, move along a plane, and interact with each other. It is the first time that scientists have been able to use sound to simultaneously levitate several objects next to each other and move them around. >As anyone with a subwoofer and a teenager knows, sound waves exert pressure.

Child Rides EV Toy on Boyce Free Energy! A South African experimenter has modified an electrolysis circuit developed by Bob Boyce so that now it recharges his daughter's electric vehicle riding toy. What makes this remarkable is that the energy is not drawn from the wall but from the environment somehow. He's done this around 35 times now and knows of three replications of the effect by others.

The Rodin Coil: Is It The Greatest Discovery of All Time? Free energy is easily one of the hottest topics in the world within alternative news. While mainstream news continues to ignore the growing interest around the subject, alternative news outlets are providing new information about the inventions, science, mathematics and suppression of free energy technologies. We even covered the subject in our new documentary The Collective Evolution III: The Shift

Magnetic levitation Magnetic levitation, maglev, or magnetic suspension is a method by which an object is suspended with no support other than magnetic fields. Magnetic pressure is used to counteract the effects of the gravitational and any other accelerations. Earnshaw's theorem proves that using only ferromagnetic or paramagnetic materials it is impossible to stably levitate against gravity; however, servomechanisms, the use of diamagnetic materials, superconduction, or systems involving eddy currents allow to achieve that. In some cases the lifting force is provided by magnetic levitation, but there is a mechanical support bearing little load that provides stability. This is termed pseudo-levitation. Magnetic levitation is used for maglev trains, magnetic bearings and for product display purposes.

the secret they can't kill. Bob Boyce's Story The man in the photo [right] is Bob Boyce. You probably have never heard of Bob until now. Richard Obousy on Alcubierre and Casimir Warp Drives Dr. Richard Obousy describes an advanced space-propulsion concept based on modifying the local cosmological constant to facilitate an expansion/contraction of spacetime around a spacecraft to create an exotic form of field-propulsion. This idea is analogous to the Alcubierre bubble, but differs entirely in the approach, utilizing the physics of higher dimensional quantum field theory, instead of general relativity. "In the spirit of Morris, Thorne and Yurtsever these warp drives, provide an unique and inspiring opportunity to ask the question 'what constraints do the laws of physics place on the abilities of an arbitrarily advanced civilization'. In this paper a new and innovative mechanism to generate the necessary 'Alcubierre warp bubble' is proposed.

Dr Paul LaViolette - Secret Space Program Dr. LaViolette is the first to predict that high intensity volleys of cosmic ray particles travel directly to our planet from distant sources in our Galaxy, a phenomenon now confirmed by scientific data. He is also the first to discover high concentrations of cosmic dust in Ice Age polar ice, indicating the occurrence of a global cosmic catastrophe in ancient times. Based on this work, he made predictions about the entry of interstellar dust into the solar system ten years before its confirmation in 1993 by data from the Ulysses spacecraft and by radar observations from New Zealand. He also originated the glacier wave flood theory that not only provides a reasonable scientific explanation for widespread continental floods, but also presents a credible explanation for the sudden freezing of the arctic mammoths and demise of the Pleistocene mammals.

4. Discussion of German Field Propulsion Saucers 1 Some explanation has been attempted regarding the Schauberger models and the KM-2 rocket. From this point on, the discussion of German field propulsion saucers will move away from the areas centering around observed evidence and into areas of interpretation. Some of the German flying craft described are flying saucers in the classic sense.