Many the Walt Disney World (WDW) attractions were created to showcase a specific movie, but occasionally the roles are reversed! Learn about seven WDW attractions that inspired movies to be based on them. 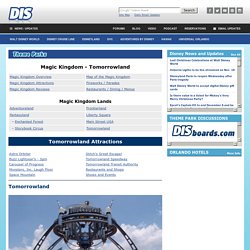 The only trouble with futuristic views is that they need frequent updating. Disney's Tomorrowland Trailer #2 - In Theaters May 22! Tomorrowland: how Walt Disney’s strange utopia shaped the world of tomorrow. Welcome to the future. 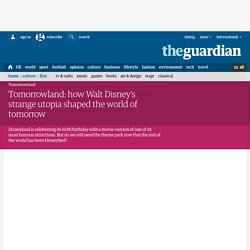 Or is it the past? In Tomorrowland, Disney’s new adventure movie, George Clooney and friends risk life and limb to reach the utopian realm of the title, and it looks pretty much like we expected the future to look, at least back in the 1960s: a pristine, shopping-mall sort of place with soaring glass spires and flying trains and happy people of all nations wearing coloured boiler suits. But here in the real world (a relative term, admittedly) you can visit Tomorrowland today. As many millions of visitors know, it is already an area of Disney’s theme parks, devoted to the same type of optimistic techno-futurism Tomorrowland the movie espouses. You do not have to risk life and limb to get there, but it could cost you an arm and a leg. Tomorrowland - Disney Park History. Tomorrowland at Magic Kingdom Park: Then and Now… We’re continuing our special image series “Then and Now” with a look at how Tomorrowland in Magic Kingdom Park at Walt Disney World Resort has changed over the years. 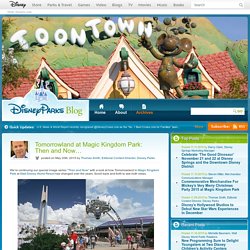 Scroll back and forth to see both views. When Magic Kingdom Park opened in 1971, Tomorrowland featured Grand Prix Raceway, Flight to the Moon, the Skyway to Fantasyland and the Tomorrowland Terrace Restaurant. Over the next few years, other attractions were added, including Star Jets, Space Mountain and Walt Disney’s Carousel of Progress. Disney’s Tomorrowland Inspired by Calatrava’s Architecture of Today. Tomorrowland's futuristic set was based on Santiago Calatrava’s City of Arts and Sciences in Valencia. 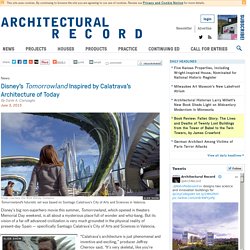 Disney’s big non-superhero movie this summer, Tomorrowland, which opened in theaters Memorial Day weekend, is all about a mysterious place full of wonder and whiz-bang. But its vision of a far-off advanced civilization is very much grounded in the physical reality of present-day Spain — specifically Santiago Calatrava’s City of Arts and Sciences in Valencia.

“Calatrava’s architecture is just phenomenal and inventive and exciting,” producer Jeffrey Chernov said. Wallace - Tomorrowland Wiki - Wikia. Wallace is an artist and the owner of the Cartography of Disney. 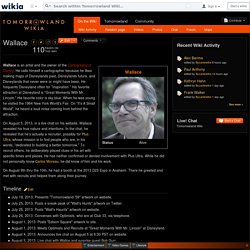 He calls himself a cartographer because he likes making maps of Disneylands past, Disneylands future, and Disneylands that never were or might have been. He frequents Disneyland often for "inspiration. " His favorite attraction at Disneyland is "Great Moments With Mr. MK MAP. 5 Disney World References Hidden In The Tomorrowland Trailer. For as visually impressive and uber secretive as Brad Bird’s Tomorrowland is, it’s above all else, a love letter to Walt Disney and his vision for the future. 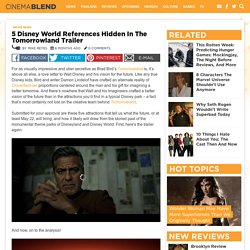 Like any true Disney kids, Bird and writer Damon Lindelof have crafted an alternate reality of Cloverfield-ian proportions centered around the man and his gift for imagining a better tomorrow. And there’s nowhere that Walt and his Imagineers crafted a better vision of the future than in the attractions you’d find in a typical Disney park – a fact that’s most certainly not lost on the creative team behind Tomorrowland. Submitted for your approval are these five attractions that tell us what the future, or at least May 22, will bring; and how it likely will draw from the storied past of the monumental theme parks of Disneyland and Disney World. First, here's the trailer again: Country Bear Jamboree. The Country Bears. The Country Bear Jamboree at Walt Disney World's Magic Kingdom! (in HD) Country Bear Jamboree at Yesterland. The history of Country Bear Jamboree goes back to when Walt Disney was alive. 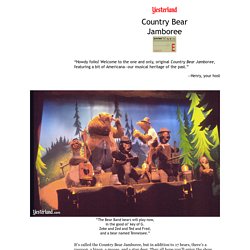 As one of his final projects, Walt planned Mineral King, a mountain resort for a site in Sequoia National Forest. Walt was confident that guests would enjoy skiing, hiking, and other daytime outdoor activities. But he was concerned that those guests would leave the property at nightfall, taking their wallets with them. He could need to offer reasons for them to stay. ‘Country Bear Jamboree’ at Walt Disney World. Photo ORLANDO, Fla. — The panicked rumors started to swirl on Disney fan blogs last spring: “Mama, Don’t Whip Little Buford” was a surefire goner. 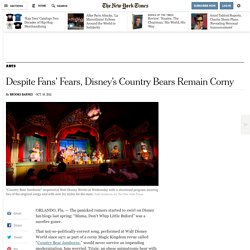 That not-so-politically-correct song, performed at Walt Disney World since 1971 as part of a corny Magic Kingdom revue called “Country Bear Jamboree,” would never survive an impending modernization, fans worried. Trixie, an obese animatronic bear with a boozy performance (“Tears Will Be the Chaser for Your Wine”), might also be in trouble. “It’s outdated, but it’s also like stepping back into your childhood,” Evelyn Garcia, a fan, said after taking in the show in May. “They mess with it over my dead body.” And therein lies one of Disney’s most vexing challenges: How do you keep these outdated but beloved shows relevant to the iPad generation while not angering hard-core fans? 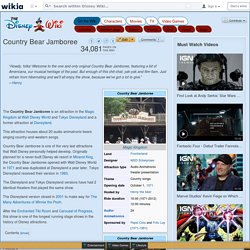 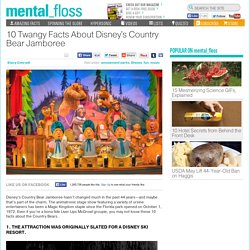 The animatronic stage show featuring a variety of ursine entertainers has been a Magic Kingdom staple since the Florida park opened on October 1, 1972. Even if you’re a bona fide Liver Lips McGrowl groupie, you may not know these 10 facts about the Country Bears. Back in the mid '60s, Disney had big plans to build a ski resort in California’s Sequoia National Park. In addition to the ski slope, the resort would have included a five-story hotel with 1030 rooms, a movie theater, a general store, ice rinks, tennis courts—and a variety show featuring a band of bears that appeared to have wandered in from the surrounding forest.

On September 19, 1966, Disney held a press conference to announce the project. Magic Kingdom Attractions. Magic Kingdom It's A Small World (Full Ride) POV Walt Disney World HD. It's a Small World (1950) - Clip. Disney Planning Movie Based on ‘It’s a Small World’ Paul Hiffmeyer/Disney Parks Disney is ramping up a movie version of its venerable “It’s a Small World” theme park ride with Jon Turteltaub directing. Jared Stern is writing the script and will produce with Turteltaub and “The Lego Movie” producer Dan Lin. The ride was created by WED Enterprises and debuted at the New York World’s Fair in 1964. It was rebuilt after the fair, installed in Disneyland and now operates as a boat ride in five Disney parks. “It’s a Small World” features over 300 audio-animatronic dolls from all over the world singing the upbeat title song, which promotes peace and understanding.

In anticipation of October 31, we had been sharing stories about Disneyland's The Haunted Mansion. Last Friday, WDFM volunteer and Disney historian Joseph Titizian told us about the history and Walt's involvement with this attraction. Earlier this week, Disney Legend Harriet Burns's grandaughter Chelsea Clair shared with us a little known story about her grandmother and The Haunted Mansion's Madame Leota. In celebration of Halloween today, we are so pleased and honored to have Disney Legend and Imagineer Rolly Crump share with us—exclusively for Storyboard—his story about his involvement with Imagineering The Haunted Mansion, and what it was like to work with Walt Disney!

Here are 10 amazing facts about this classic Disney ride so you’ll learn something while you’re trying to get that song out of your head. It Was the Last Ride Walt Personally Oversaw PotC Wiki. The Real Pirates of the Caribbean: What the Movies Got Wrong. David Cordingly/Photo by Shirley Cordingly David Cordingly was for twelve years on the staff of the National Maritime Museum in Greenwich, England, where he was curator of paintings and then head of exhibitions. 10 Things You Didn’t Know About Pirates of the Caribbean: The Curse of The Black Pearl.

It’s a pirates life for us, mateys. We love all things related to Pirates of the Caribbean, especially little-known facts. And we know you do too. But we bet you don’t know all of these facts. In fact, we would bet on a cursed coin, which might later turn us into zombie skeleton pirates, that you’re about to learn something new about this swashbuckling film: Keira Knightley was 17 during filming and her mother accompanied her to all of the shoot locations. We did not shoot a movie when we were 17, which makes us a tad jealous of this. The soot used in this fight scene was actually chocolate powder. Delicious. The entire attack scene on Port Royal was shot in a single take. *slow clap* This cloud formation is an official Hidden Mickey. Did you see it when you were watching the movie in theaters? Although the cursed pirates cannot be killed, they can be hurt. Those swords look a bit more dangerous now, don’t they? Pirates of the Caribbean: The Ride - The Movie. YouTube - Broadcast Yourself.

True story. I was eleven years old when I experienced my first “freefall” on the doomed elevator located in the dilapidated and haunted Hollywood Tower Hotel and have been captivated ever since, some 20 years later, by the nervous anticipation, breathless euphoria, and otherworldly wonder this attraction offers. This is easily my favorite ride on Disney property, and I am just as impressed by the story and details surrounding the attraction as I am about that stomach-forfeiting plunge.