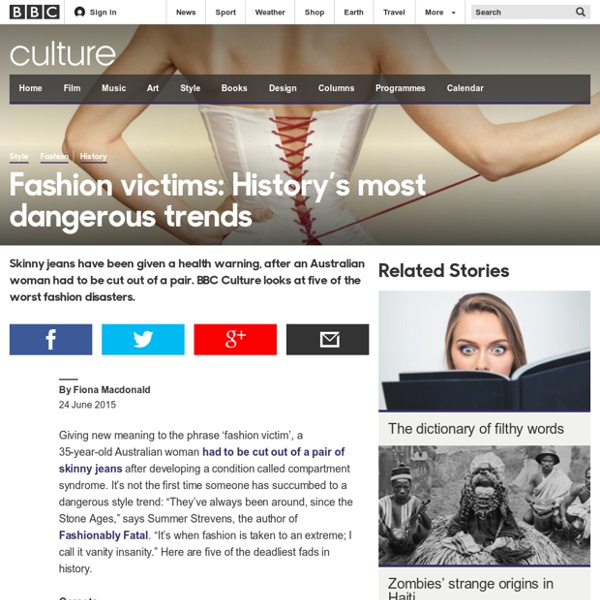 Giving new meaning to the phrase ‘fashion victim’, a 35-year-old Australian woman had to be cut out of a pair of skinny jeans after developing a condition called compartment syndrome. It’s not the first time someone has succumbed to a dangerous style trend: “They’ve always been around, since the Stone Ages,” says Summer Strevens, the author of Fashionably Fatal. “It’s when fashion is taken to an extreme; I call it vanity insanity.” Here are five of the deadliest fads in history. Corsets The undergarment that shrank waistlines long before Spanx had an influence on language as much as women’s bodies: it spawned the term ‘strait-laced’, lending a Victorian respectability to its wearer, as well as ‘loose women’ – implying that those who were corset-less had morals as free as their lacing. Crinoline fires The structured petticoat did more than just enhance a silhouette. Stiff collars Invented in the 19th Century, the detachable collar meant men didn’t have to change their shirt every day.

Luxury Brands Must Develop Their Customer Experience To Survive Luxury retailers must focus on providing a rounded customer experience, rather than simply flogging goods, if they are to survive the ongoing recession. According to a new report by The Future Laboratory, commissioned by the property company Grosvenor, has found there are five key areas luxury brands must improve to keep their customers happy. 1) Providing one-on-one experiences 2) Micro-events that are highly tailored to suit VIP shoppers, larger community moments that are shared via digital tools and clever event management. These events are now about much more than pop-up and publicity; they will be highly tailored to suit VIP shoppers.

Culture - How hip-hop style critiques society It’s rare that a new hip-hop album is greeted by a story in US Vogue. All the more so when the story is about the artists’ fashion preferences rather than his music. Yet earlier this year, in May, the magazine marked the release of rising rap star A$AP Rocky’s new album At.Long.Last.A$AP with a list of the many fashion references on the record, a roll call that included Rick Owens, Dior, Martin Margiela and Saint Laurent alongside luxury accessories brands such as Audemars Piguet watches and Goyard, the bespoke luggage maker.

In Pictures: African fashion comes to London - BBC News News navigation Sections Advertisement Africa is sponsored by Luxury brands must redefine the way they do business There were times when China was the holy grail for global retailers. Logo-obsessed Chinese buyers seeking opulence were armed with cash fresh from the economic boom. Luxury retail brands flocked to the new market, with the result of 35% of sales for brands such as Omega, Harry Winston and Balmain coming from Greater China, according to estimates by Exane BNP Paribas. The region is responsible for a whooping 25% of sales at Burberry and 20% of sales at Prada.

Why 2015 is the year fashion’s casting is changing 2015 has, so far, been a big year in fashion. We’ve been witness to a full-frontal fashion statement thanks to Rick Owens’ trouserless models, seen Galliano’s triumphant return to the industry at Margiela, and been treated to Ben Stiller and Owen Wilson’s reprisal of their iconic Zoolander roles at the end of the Paris catwalk. But today, as we officially put the first quarter of the year behind us, there’s one theme that has risen from of the haze of 2015’s Instagram moments to dominate the past three months of fashion – casting. “Through the internet people all over the world are getting more acquainted with all types of people, faces and identities and starting to realise how insular fashion is,” explained Nafisa Kaptownwala, founder of outsider modeling agency Lorde Inc to Dazed last week, as she reflected on why fashion shows remain dominated by white models and whether the world is prepared for her collective’s radical vision of streetcast diversity.

What NOT to Wear to London Fashion Week Five models stand with handbags dripping with “blood” to highlight why exotic skins have no place on the catwalk. The graphic protest on Bond Street, taking place the day before London Fashion Week gets into full swing, was a plea for fashion to be beautiful, not bloody. Tens of thousands of crocodiles, alligators, snakes, eels, kangaroos and other animals are killed for their skins every year. Often, they’re kept on crowded factory farms for their entire lives before being bludgeoned to death or skinned alive. A recent PETA exposé of farms that supply crocodile and alligator skins to Hermès-owned tanneries documented that alligators on one farm had their necks sawn open. Some of them were still alive and moving minutes afterwards. Fast fashion online business have made a fortune for owners of businesses like Zara — Quartz In its first seven years of existence, Uber has irked cities, flouted regulators, and petrified whole industries. It has yet to make money but is worth a fifth more than BMW and almost a third more than General Motors, both the owners of tons of futuristic technology, tens of billions of dollars in capital equipment, and big profits. In recent deals resembling famous speculative bubbles, rich investors eager for a piece of this juggernaut have poured hundreds of millions of dollars into custom funds that provide exposure to Uber but no equity or financial disclosure. Which is to say that investors have made a one-way, uber-bullish bet on Uber, forecasting that the company will be at the center of an utter transformation of our collective lifestyle.

Body Anxiety and a new wave of digifeminist art Jennifer Chan and Leah Schrager are two names you need to get familiar with. The US-based new media artists have co-curated an all-female line-up of 21 artists – for the currently on show exhibition titled Body Anxiety – who use their own bodies in their works, while pioneering the newest forms of media: from online performance GIF art (see: May Waver and RAFia Santana) to web and digital art – alongside video, poetry and photography. The virtual exhibit demonstrates the plurality of views on the female body politic, on self-representation and on agency.

how pop art influenced fashion Creative industries typically need each other to survive - art feeds on music, music feeds on art, fashion feeds on both and advertising eats everything it can get its mouth around. The bond between fashion and art is currently as strong as ever as evidenced everywhere from Prada's Spring/Summer 2014 commission of six graffiti artists, Bottega Veneta's work with Ryan McGinley and the modern-art-museum-worth of Louis Vuitton collaborations with artists like Yayoi Kusama to Takashi Murakami and Richard Prince. This commercially fruitful partnership goes back to the first half of the 20th Century, when Salvador Dali placed a giant-sized lobster on a white Elsa Schiapparelli dinner dress.