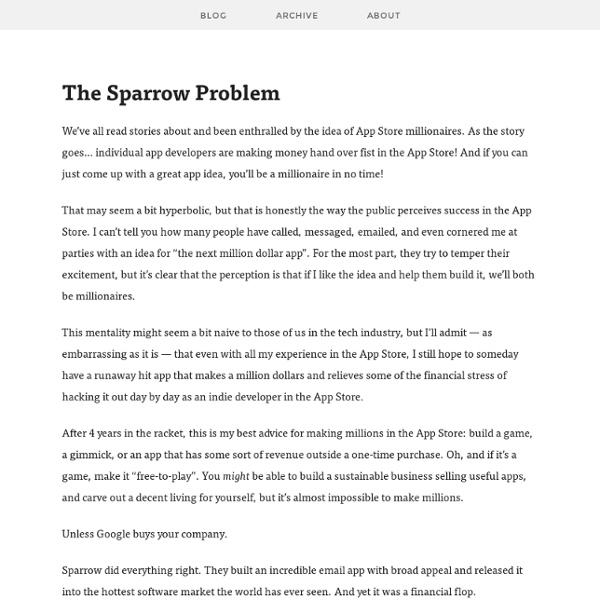 We’ve all read stories about and been enthralled by the idea of App Store millionaires. As the story goes… individual app developers are making money hand over fist in the App Store! And if you can just come up with a great app idea, you’ll be a millionaire in no time! That may seem a bit hyperbolic, but that is honestly the way the public perceives success in the App Store. This mentality might seem a bit naive to those of us in the tech industry, but I’ll admit — as embarrassing as it is — that even with all my experience in the App Store, I still hope to someday have a runaway hit app that makes a million dollars and relieves some of the financial stress of hacking it out day by day as an indie developer in the App Store. After 4 years in the racket, this is my best advice for making millions in the App Store: build a game, a gimmick, or an app that has some sort of revenue outside a one-time purchase. Unless Google buys your company. Sparrow did everything right. Flop? david

The secrets to making money with mobile apps A couple years ago, it was clear a Gold Rush mentality was brewing as the iPhone proved that people really, really wanted mobile apps. Lots of developers jumped in to claim their fortune, as did many students and regular folks lured by the promise of easy money through cookie-cutter apps created for them by forms-based websites. The Gold Rush fever has cooled, but not the desire for mobile apps, nor have the opportunities for real developers to make real money from mobile. Forrester Research estimates that $17.5 billion worth of mobile apps will be sold this year across all platforms. [ InfoWorld picks the 12 essential mobile app development tools. | Get the best apps for your mobile device: InfoWorld picks the best iPad office apps, the best iPad specialty business apps, the best Android office apps, and the best Android specialty apps. | Keep up on key mobile developments and insights with the Mobilize newsletter. ] In some cases, a subscription model makes sense.

iOS app success is a “lottery”: 60% (or more) of developers don’t break even There is no shortage of stories about lone developers who made an app for the iPhone or iPad and had runaway success. But in the real world, the majority of app makers struggle to break even, according to a recent survey by marketing firm App Promo. Though the survey's methodology is a bit on the light side, numerous developers that we spoke to agree that the results—59 percent of apps don't break even, and 80 percent of developers can't sustain a business on their apps alone—are close to accurate. High expectations Apple often boasts that the App Store offers users hundreds of thousands of apps to choose from. "Over the years I have seen visibility of applications I've worked on greatly reduced," developer Pat McCarron told Ars. Rogue Amoeba's Paul Kafasis agreed that the App Store has become more of a lottery, and less a chance for small developers to succeed along with well-established companies. Apple encourages practically anyone to try their hand at iOS development. Kafasis agreed.

Sriram Krishnan Unsolicited advice for Marissa Mayer That was one of many messages I got from current and ex-Yahoos on yesterday's news. Having recently exited a short stint at Yahoo as an engineering manager and having had hundreds of conversations with employees on what needs to change at the company, I've seen both the best and the worst of the company. The press has many suggestions for big strategic moves that Marissa should be doing. Here's a list of smaller tactical ones she could do. Marc Andreessen thinks you need to fire over 10K people. 20 Scam-Free Ways to Make Money Online Fast Make money online fast — 20 REAL ways people make money online.Cathy is in need of a legitimate way to make money online fast. She writes in: “I was a nurse for almost 30 years when I became disabled from a car wreck. I am a very tough person (I’m a redhead!) I went out last October and bought a new PC to try and make money online, but all I have succeeded in doing is getting further in debt. I have been reading A LOT and trying to learn as much as I can. I’m not expecting to make tons of money today, but ANYTHING to help me get started in the right direction. Cathy has the right attitude — she’s not looking for a get-rich-quick scheme, but instead a legitimate way to make some extra money online. Having been sucked into some scams myself in the past, I know how difficult it can be to find real ways to make money online fast. Note: None of the 20 ways listed below contain affiliate links (that is, links that make me money if you click on them.) 1. 2. 3. 4. 5. 6. 7. 8. 9. 10. 11. 12.

Content Curators Are The New Superheros Of The Web Yesterday, the ever-churning machine that is the Internet pumped out more unfiltered digital data. Yesterday, 250 million photos were uploaded to Facebook, 864,000 hours of video were uploaded to YouTube, and 294 BILLION emails were sent. And that's not counting all the check-ins, friend requests, Yelp reviews and Amazon posts, and pins on Pintrest. The volume of information being created is growing faster than your software is able to sort it out. As a result, you're often unable to determine the difference between a fake LinkedIn friend request, and a picture from your best friend in college of his new baby. Even with good metadata, it's still all "data"--whether raw unfiltered, or tagged and sourced, it's all treated like another input to your digital inbox. What's happened is the web has gotten better at making data. In 2010 we frolicked, Googled, waded, and drowned in 1.2 zettabytes of digital bits and bytes. Which means it's time to enlist the web's secret power--humans. 1.

Instant Websites for Nonprofits | Bellstrike The Jig Is Up: Time to Get Past Facebook and Invent a New Future - Alexis Madrigal - Technology After five years pursuing the social-local-mobile dream, we need a fresh paradigm for technology startups. Finnish teenagers performing digital ennui in 1996 2006. Reuters. We're there. "The third generation of data and voice communications -- the convergence of mobile phones and the Internet, high-speed wireless data access, intelligent networks, and pervasive computing -- will shape how we work, shop, pay bills, flirt, keep appointments, conduct wars, keep up with our children, and write poetry in the next century." That's Steve Silberman reporting for Wired in 1999, which was 13 years ago, if you're keeping count. I can take a photo of a check and deposit it in my bank account, then turn around and find a new book through a Twitter link and buy it, all while being surveilled by a drone in Afghanistan and keeping track of how many steps I've walked. The question is, as it has always been: now what? Decades ago, the answer was, "Build the Internet." That paradigm has run its course.

Introduction to Programming in Java: An Interdisciplinary Approach a textbook for a first course in computer sciencefor the next generationof scientists and engineers Textbook. Our textbooks Introduction to Programming in Java [Amazon · Pearson · InformIT ] and Computer Science [Amazon · Pearson · InformIT ] are an interdisciplinary approach to the traditional CS1 curriculum with Java. We teach the classic elements of programming, using an "objects-in-the-middle" approach that emphasizes data abstraction. We motivate each concept by examining its impact on specific applications, taken from fields ranging from materials science to genomics to astrophysics to internet commerce. The first half of the book is organized around four stages of learning to program: Chapter 1: Elements of Programming introduces variables; assignment statements; built-in types of data; conditionals and loops; arrays; and input/output, including graphics and sound. Booksite. For students: Java programming environment. For instructors: Python. Copyright © 2000–2016 and .

Why the Impossible Happens More Often [Translations: Japanese] I’ve had to persuade myself to believe in the impossible more often. In the past several decades I’ve encountered a series of ideas that I was conditioned to think were impossibilities, but which turned out to be good practical ideas. For instance, I had my doubts about the online flea market called eBay when it first came out. Pay money to a stranger selling a car you have not seen? I thought the idea of an encyclopedia that anyone could change at any time to be a non-starter, a hopeless romantic idea with no chance of working. Twenty years ago if I had been paid to convince an audience of reasonable, educated people that in 20 years time we’d have street and satellite maps for the entire world on our personal hand held phone devices — for free — and with street views for many cities — I would not be able to do it. These supposed impossibilities keep happening with increased frequency. In a word: emergence. The Noosphere Sculpture by Yves Jeason

CodeNow, the nonprofit that teaches inner city kids to code, lands in San Francisco It only took a few months for Wilfred, a teen from a rough neighborhood in Washington D.C., to begin handing out handwritten business cards with the title “future engineer.“ With a presence in D.C. and now San Francisco, CodeNow is a nonprofit that encourages high school students from inner city neighborhoods to pick up coding skills. Wilfred (pictured left, teaching a fellow student) was one of the first to join the program — he practiced up to five hours a night and has a proclivity for the programming language Ruby on Rails. Wilfred’s was just one of the many heartwarming stories shared at the launch event, held at a co-working space in San Francisco this week. “About 40 percent of the students have the potential to be developers,” said CodeNow founder Ryan Seashore during a phone interview with VentureBeat. There are already over 50 alumni of the CodeNow program, which has close ties to the tech community.

Top 10 Ways to Make Money on the Internet" Unless you're a freegan and have found a way to live entirely off the grid, you probably need some sort of steady income in order to survive. The traditional way to earn money, of course, is by having a job. You work for a company or start your own, and the work you do earns you money, which you spend on things like a mortgage, rent, food, clothing, utilities and entertainment. Most people typically work from their company's central location, a physical space where everyone from that organization gathers to exchange ideas and organize their efforts. But a few lucky souls have found ways to make money within the comfort of their own home. We've put together a list of our top 10 ways to make money on the Internet, in no particular order.