Greed and Debt: The True Story of Mitt Romney and Bain Capital 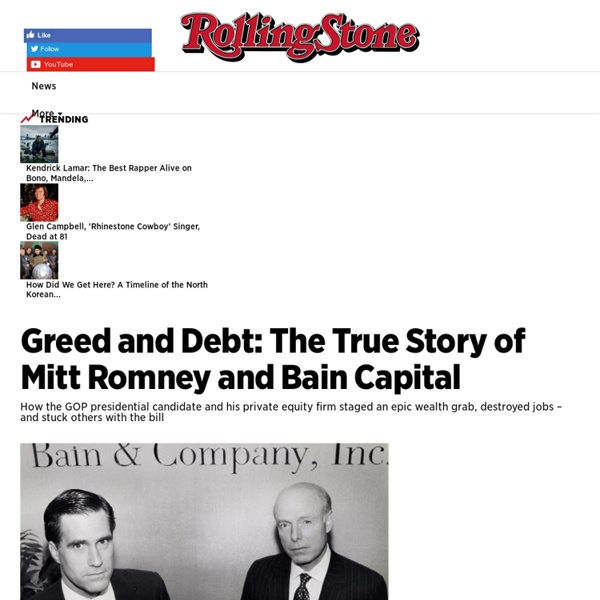 The great criticism of Mitt Romney, from both sides of the aisle, has always been that he doesn't stand for anything. He's a flip-flopper, they say, a lightweight, a cardboard opportunist who'll say anything to get elected. The critics couldn't be more wrong. The incredible untold story of the 2012 election so far is that Romney's run has been a shimmering pearl of perfect political hypocrisy, which he's somehow managed to keep hidden, even with thousands of cameras following his every move. Like John McCain four years before, Romney desperately needed a vice-presidential pick that would change the game. Debt, debt, debt. Last May, in a much-touted speech in Iowa, Romney used language that was literally inflammatory to describe America's federal borrowing. And this is where we get to the hypocrisy at the heart of Mitt Romney. Mitt Romney, it turns out, is the perfect frontman for Wall Street's greed revolution. Like John F. But here's the catch. Romney is a man from nowhere. Related:  Mr. Mitt

Clinging to the American Dream in Middletown, Ohio (CBS News) MIDDLETOWN, Ohio - Both Mitt Romney and President Obama are courting middle-class voters -- many of whom fear the dream of a better life for their children is slipping away. In a CBS News poll, 39 percent of voters told us they are worse off than they were four years ago. So how would the candidates' tax policies affect the middle class? In Middletown, Ohio, Deanna and Terry Shores consider themselves and their two boys a typical middle-class family. "We're middle class," said Deanna. Asked if she feels like the middle class gets lost in the middle, Deanna responded: "We just kind of get looked at as, 'Well, they're doing okay.' Video: Who can fix the economy, help the middle class? On the streets of Middletown, the signs of that economic struggle are everywhere. Back in 1957, Look magazine gave Middletown its "All-America City" award. As businesses have left, the poverty rate has soared here. My grandfather built engines for GE," said Deanna. © 2012 CBS Interactive Inc.

The Biggest Price-Fixing Scandal Ever | Politics News Conspiracy theorists of the world, believers in the hidden hands of the Rothschilds and the Masons and the Illuminati, we skeptics owe you an apology. You were right. The players may be a little different, but your basic premise is correct: The world is a rigged game. You may have heard of the Libor scandal, in which at least three – and perhaps as many as 16 – of the name-brand too-big-to-fail banks have been manipulating global interest rates, in the process messing around with the prices of upward of $500 trillion (that's trillion, with a "t") worth of financial instruments. That was bad enough, but now Libor may have a twin brother. Interest-rate swaps are a tool used by big cities, major corporations and sovereign governments to manage their debt, and the scale of their use is almost unimaginably massive. The Scam Wall Street Learned From the Mafia Why? The bad news didn't stop with swaps and interest rates. The banks found a loophole, a basic flaw in the machine.

Ann Romney convention speech: Mitt's wife tried to make us love him. Did she succeed? Photo by Mark Wilson/Getty Images Ann Romney was trying to accomplish several things in her speech Tuesday night at the GOP Convention, none of them easy. Mitt is doing fine with married women, but he trails woefully with unmarried female voters. So it wasn’t surprising when she spoke directly to women, moms in particular, saying that, “You are the best of America.” But when she told us she was there to “talk to you about love,” I got a little nervous. On one level, it makes sense: Every candidate’s wife is there to smooth out his rough edges, to balance out her husband’s weaknesses. She wasn’t just trying to humanize her husband, she was trying to make us love him. Ann did get specific when she mentioned some of Mitt’s accomplishments as governor. Had she just promised us that “This man will lift up America!”

How the GOP Became the Party of the Rich | Politics News The nation is still recovering from a crushing recession that sent unemployment hovering above nine percent for two straight years. The president, mindful of soaring deficits, is pushing bold action to shore up the nation's balance sheet. Cloaking himself in the language of class warfare, he calls on a hostile Congress to end wasteful tax breaks for the rich. "We're going to close the unproductive tax loopholes that allow some of the truly wealthy to avoid paying their fair share," he thunders to a crowd in Georgia. Such tax loopholes, he adds, "sometimes made it possible for millionaires to pay nothing, while a bus driver was paying 10 percent of his salary – and that's crazy." Preacherlike, the president draws the crowd into a call-and-response. The crowd, sounding every bit like the protesters from Occupy Wall Street, roars back: "MORE!" The year was 1985. Today's Republican Party may revere Reagan as the patron saint of low taxation. Then something strange happened.

American dream — Are we optimistic, pessimistic? COLUMBUS, Ohio — He’s 30, between jobs, with $50,000 in student debt and no clear sense of what the future holds. But Erik Santamaria, Ohio-born son of Salvadorans, has a pretty awesome attitude about his country, his life and the world of possibilities. “Maybe things won’t work out the way I want,” he says. “But, boy, I sure can’t complain about how things have worked out so far.” This is the sweet spot of American optimism, a trait that looms large in the nation’s history and imagination. With anyone else, it’s hit or miss. For many, these times are a slog. That “shining city on a hill” from political mythology looks more like a huffing climb up a field filled with ticks. Still, you aren’t seeing pessimism in the season of the political conventions. The Democrats, convening Tuesday in Charlotte, N.C., want to corner the franchise on happier tomorrows, just as the Republicans wanted at their convention this past week. But such platitudes probably won’t go far with Marie Holly, 54.

Fed Policy and Bond Yields Update: Charts and data after the read more. With the Fed completing a two day meeting and Bernanke holding a press conference today it may be a good time to make a few comments about bond yields. In an open economy with a current account deficit the equilibrium interest rate is the one that attracts sufficient foreign capital to finance the current account deficit with a stable exchange rate. If the currency is rising it indicates that yields may be too high, while a falling currency implies that yields are too low. If you are going to model Canadian interest rates the first thing you do is put the US bond yield in the model. In my model I include the average of the British, German and Japanese yields. The other variables include things like nominal income growth, the trade weighted dollar, fed funds and a couple of other variables. I have not altered the model to include any measure of QE or other special moves by the Fed. Tags: bonds

Mitt Romney’s Tax Mysteries: A Reading Guide Republican presidential candidate Mitt Romney looks on as his running mate Paul Ryan speaks during a campaign rally in Powell, Ohio, on Aug. 25, 2012. We lay out what we know and don't know about Romney's tax situation. (Jewel Samad/AFP/GettyImages) So what do we know about how he avoided that extra dollar? What's Been Disclosed? Romney has released [6] his 2010 tax return, and an estimate of his 2011 return. Mitt Romney said recently that he has paid “at least 13 percent [9]” in federal income taxes each year, but the campaign won't go into more detail (for a closer look at his 13.9 percent rate in 2010, see our previous reading guide [6]). Romney's Bain Career Buyout Profits Keep Flowing to Romney [12], New York Times, December 2011 The New York Times laid out how Romney's generous retirement deal let him keep investing in new Bain funds for 10 years after he left the company in 1999. Romney's Tax Rate Overseas Accounting Romney's IRA's off-shore investments: helping his tax bill?

Why the GOP Should Fear a Romney Presidency - Jack M. Balkin At best, he would be hamstrung by the conflicting demands of a radicalized party. At worst, he would wreck the Reagan coalition. Brian Snyder/Reuters What kind of president would Mitt Romney be? Reconstruction or Disjunction? When new presidents take office, they face not only the country's existing domestic and international problems but also the political regime created by their predecessors. Skowronek's key insight is that a president's ability to establish his political legitimacy depends on where he sits in "political time": Is he allied with the dominant regime or opposed to it, and is the regime itself powerful or in decline? For example, Lyndon Johnson was allied with the Democrats' New Deal regime, while Richard Nixon -- the second Republican elected after FDR -- was opposed to it. A president who has the good luck to run in opposition to a political regime that is falling apart is in the best possible position politically. The Last of the Reaganites Romney's Impossible Task