The Biggest Price-Fixing Scandal Ever 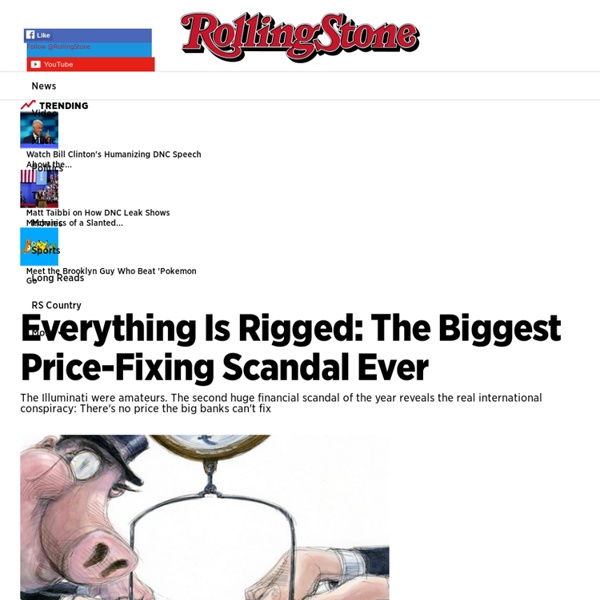 Conspiracy theorists of the world, believers in the hidden hands of the Rothschilds and the Masons and the Illuminati, we skeptics owe you an apology. You were right. The players may be a little different, but your basic premise is correct: The world is a rigged game. We found this out in recent months, when a series of related corruption stories spilled out of the financial sector, suggesting the world's largest banks may be fixing the prices of, well, just about everything. You may have heard of the Libor scandal, in which at least three – and perhaps as many as 16 – of the name-brand too-big-to-fail banks have been manipulating global interest rates, in the process messing around with the prices of upward of $500 trillion (that's trillion, with a "t") worth of financial instruments. That was bad enough, but now Libor may have a twin brother. The Scam Wall Street Learned From the Mafia Why? The bad news didn't stop with swaps and interest rates. "You name it," says Frenk.

I Traveled to Palestine-Israel and Discovered There Is No 'Palestinian-Israeli Conflict'  The mind has a way of making traumatic experiences seem like distant dreams to those who survive them. As it goes, the more traumatic the experience, the quicker the paramedics in one's mind rush to dress wounds, resuscitate and stabilize the victim; the victim being you. Since returning from Palestine 36 hours ago, I find myself confronted with feelings of detachment and minimization of what I encountered. My subconscious has decided the horrors I witnessed in the 'Holy Land' were nothing serious-horrors which include a 26-foot-tall concrete wall enclosing the Palestinian inhabitants of the West Bank, and the sniper towers seemingly on every other corner of this open-air prison.

ROLLING STONE : ROTHSCHILD CORRUPTION GOES MAINSTREAM Jacob Rothschild Rolling Stones ~”Conspiracy theorists of the world, believers in the hidden hands of the Rothschilds, the Masons and the Illuminati, we skeptics owe you an apology”. You were right. Can the Internet Replace Big Banks? Douglas Rushkoff, a media theorist, author, and documentarian. The ideas in this piece are built on the arguments of his new book, Present Shock: When Everything Happens Now. We've seen digital technology disintermediate everything from record companies to university curriculum. the capitalist network that runs the world - physics-math - 19 October 2011 AS PROTESTS against financial power sweep the world this week, science may have confirmed the protesters' worst fears. An analysis of the relationships between 43,000 transnational corporations has identified a relatively small group of companies, mainly banks, with disproportionate power over the global economy. The study's assumptions have attracted some criticism, but complex systems analysts contacted by New Scientist say it is a unique effort to untangle control in the global economy. Pushing the analysis further, they say, could help to identify ways of making global capitalism more stable. The idea that a few bankers control a large chunk of the global economy might not seem like news to New York's Occupy Wall Street movement and protesters elsewhere (see photo).

The Great American Bubble Machine The first thing you need to know about Goldman Sachs is that it's everywhere. The world's most powerful investment bank is a great vampire squid wrapped around the face of humanity, relentlessly jamming its blood funnel into anything that smells like money. In fact, the history of the recent financial crisis, which doubles as a history of the rapid decline and fall of the suddenly swindled dry American empire, reads like a Who's Who of Goldman Sachs graduates. Invasion of the Home Snatchers

9/11:Israel did it - WikiSpooks When an event occurs that that fundamentally changes the dynamics of global geopolitics, there is one question above all others whose answer will most assuredly point to its perpetrators. That question is "Cui bono?". If those so indicted are in addition found to have had both motive and means then, as they say in the US, it's pretty much a slam-dunk. And so it is with the events of 9/11. Discounting the 'Official narrative' as the absurdity it so clearly is, there are just two organisations on the entire planet with the expertise, assets, access and political protection necessary to have both executed 9/11 and effected its cover-up to date (ie the means).

Nervous Cypriots hit cash machines 16 March 2013 Lines formed at many ATMs as people scrambled to pull their money out after word that the 10 billion euro (£8.6bn) rescue package Cyprus agreed with its euro area partners and the International Monetary Fund included one-off levy on deposit, an unprecedented step in the eurozone crisis. The levy is expected to raise 5.8 billion euro. Kevin Barrett: 9/11 Probe Closing in on Israel Why is Israel committing suicide? (Kevin Barrett) Netanyahu’s genocidal onslaught in Gaza has done more to delegitimize the Zionist entity than the work of all the world’s anti-Zionists put together. Yet the Israeli military cannot stop the Palestinian resistance; from an Israeli standpoint, the hecatomb in Gaza serves no military or strategic purpose. Is Israel insane? That is a rhetorical question.

Nikola Tesla - Deathbed Confessions, Photos Support Claims That George H. Scherf(f), Jr Was The 41st U.S. President George Bush Bibliotecapleyades.net Panacea Bocaf.org Nikola Tesla Recent evidence has surfacing detailing that Nikola Tesla was murdered the day after he was visited for an all-day interview with two secret service agents, Reinhardt Galen & Otto Skorzeny. After suffocating him, they stole all of Tesla’s blueprints & papers. Otto Skorzeny was Hitler’s bodyguard & also an assassin, one of the many Nazis who ex-filtrated to the USA after WWII, as part of Project Paperclip. Many of these Nazi scientists ended up working for NASA, the CIA, and other US secret services.