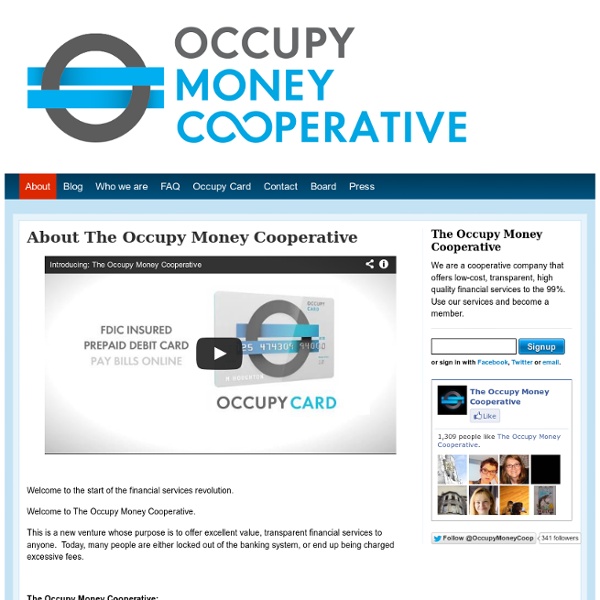 Sacred Economics | Charles Eisenstein | Money, Gift and Society in the Age of Transition. The Occupy Card The Occupy Card will provide the basic financial services that people need and use on a daily basis without the cost, or the balances required for a regular bank account.The Occupy Card will be an individual’s debit card, a savings facility, and a “virtual checkbook” all rolled into one easy-to-use package: a “bank on a card”. The Occupy Card is an innovative financial product that everyone can use. There will be no upfront cost. The card will be 99c per month. This card will directly tackle the concerns of the unbanked and the underbanked. The Occupy Card will be a highly useful, high-quality product, based on an innovative concept and platform. Who is Behind the OccupyCard? Founding Board The Occupy Money Cooperative is governed by a board of directors who will guide the development of the Coop in its early days. Carne Ross Carne is a former British diplomat who founded and now runs the non-profit diplomatic advisory group,Independent Diplomat. Robert Hockett Paul Ferris Christian Brammer

The Moneyless Manifesto | Mark Boyle alternative banking group - The Daily Occupation Mother Jones has an article about the Alternative Banking Group, an arm of the Occupy Wall Street protests that has received support from the New York GA. In addition to helping OWS propose meaningful reforms and navigate the ins and outs of financial agencies, they also provide education and outreach. The article follows Cathy O’Neil of the group in particular, giving a look into her mindset and what led her to join OWS: After studying number theory at Harvard and completing a mathematics post-doc at MIT, [O'Neil] joined D.E. Shaw in 2007, where her job was to use mathematical reasoning and statistical modeling to predict movements in the market. [...] In May 2009 she quit and went to work for Risk Metrics, a risk management consultancy for banks and hedge funds, where she hoped to use her skills more constructively, perhaps to help keep the financial system from running off another cliff. (Emphasis editor’s.)

Introduction | QOIN Money is a social construct, a human invention. We can redesign it to fulfil our needs. What is conventional money? Money is not a given. What are community currencies? Since money is man made, it can be reinvented to meet specific objectives within any kind of community, region or economic sector. stimulate local economic development, by localising production and consumption,build an active civil society,stimulate voluntary work,reduce costs to healthcare system,encourage sustainable consumption and improve waste separation. An ecosystem of community currencies Community currencies can be designed and executed in a many different ways. Social Currencies – time based currencies that value everyone’s contribution equally. Deepen your understanding of Community Currencies by getting in touch.

Open Source Ecology Meet the Financial Wizards Working With Occupy Wall Street Cathy O'Neil, a participant in the Alternative Banking GroupJosh Harkinson High up in a Manhattan conference room on Sunday, a group of investment gurus discussed Occupy Wall Street. Should they support a set of tough-sounding financial reforms just proposed on the campaign trail by presidential candidate Jon Huntsman? Or was it reasonable to demand even deeper reforms? As unlikely as it may have seemed when protesters first descended on New York's financial center this fall, an increasing number of Wall Street insiders are now returning the favor, you might say, by occupying Occupy Wall Street. "What I want is to influence the conversation," says O'Neil, who worked for two years with Lawrence Summers, the former US treasury secretary, at the hedge fund D.E. Founded in early October by former British diplomat Carne Ross, the 60-person Alternative Banking Group has become a repository for OWS-friendly financial insiders. The Alternative Banking Group's meetings can get contentious.

Passengers on Beijing subway pay with plastic bottles Contact us Passengers on Beijing subway pay with plastic bottles Posted on August 11, 2013 by elma ‹ What to Buy Organic Have a mosquito problem??? The Economics of Happiness (2011) Economic globalization has led to a massive expansion in the scale and power of big business and banking. It has also worsened nearly every problem we face: fundamentalism and ethnic conflict; climate chaos and species extinction; financial instability and unemployment. There are personal costs too. For the majority of people on the planet life is becoming increasingly stressful. We have less time for friends and family and we face mounting pressures at work. The Economics of Happiness describes a world moving simultaneously in two opposing directions. We hear from a chorus of voices from six continents including Vandana Shiva, Bill McKibben, David Korten, Michael Shuman, Juliet Schor, Zac Goldsmith and Samdhong Rinpoche - the Prime Minister of Tibet's government in exile.

Internet Financial EXchange (IFEX) Basic Income Gathers Steam Across Europe Barcelona. In the last few months basic income—an unconditional cash payment to every member of the population—has been getting more and more attention in the media and social networks. Three items are especially interesting. First, Yanis Varoufakis, the able Greek economist, Minister for Finance in the first Syriza government and well known for his trenchant opposition to Troika austerity measures bashing the poor and already vulnerable majority of the population, has become such a media star that every time he gives an opinion on political economy, some theoretical aspect of economics or economic policy, his words are widely disseminated. Hence, his remarks on basic income, which he described as “a necessity” at the Future of Work conference in Zurich on 5 May 2016, are of no small import. In a filmed talk lasting half an hour Varoufakis, incisive and original as always, reframed the debate. Art. 110a (new) Unconditional basic income The referendum will be a cliff-hanger.

Welcome - New Currency Frontiers Introduction What is degrowth actually about? Degrowth is a perspective and an emerging social movement, which in the last few years brought together a multitude of projects and ongoing debates around alternative economies. The main idea of degrowth is an economy and society which aims for the well-being of all and for ecological sustainability. One key conviction is that social and ecological global justice can only be achieved when the destructive economic activities of the global North are reduced. Degrowth criticises the current framework of society, which always calls for “higher, faster, further”, as well as connected phenomena like acceleration, excessive demands, marginalization and the destruction of the global ecosystem. A fundamental change in the growth-oriented methods of production and ways of life as well as an extensive cultural change are thus considered necessary. Creating a space for mutual learning These key degrowth ideas resonate with many politically active people.