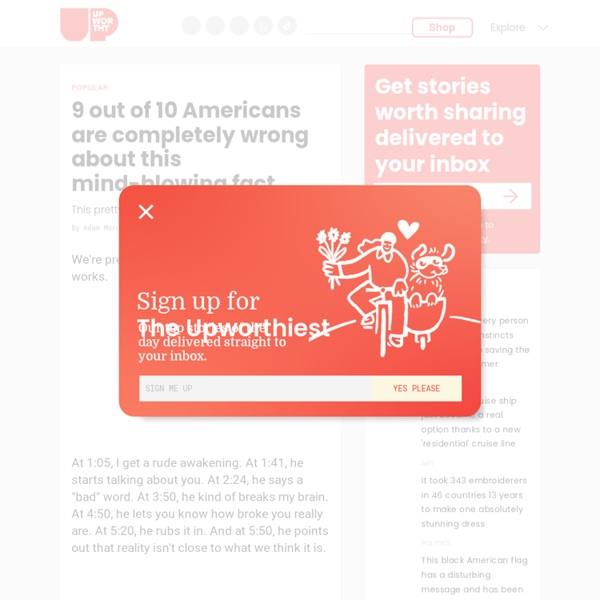 There's a chart I saw recently that I can't get out of my head. A Harvard business professor and economist asked more than 5,000 Americans how they thought wealth was distributed in the United States. This is what they said they thought it was. Dividing the country into five rough groups of the top, bottom, and middle three 20% groups, they asked people how they thought the wealth in this country was divided. Then he asked them what they thought was the ideal distribution, and 92%, that's at least 9 out of 10 of them, said it should be more like this, in other words more equitable than they think it is. Now that fact is telling, admittedly, the notion that most Americans know that the system is already skewed unfairly. So ignore the ideal for a moment. But let's look at it another way, because I find this chart kind of difficult to wrap my head around. So here's that ideal we asked everyone about. But let's move on. Sadly, this isn't even close to the reality.

Related:  News Worthy of Thought • US of A Economy

Did Someone Say “Crash”? Guess who’s investing in America’s future? Nobody, that’s who. Just check out this excerpt from an article by Rex Nutting at Marketwatch and you’ll see what I mean. The article is titled “No one is investing in tomorrow’s economy”: The Great SIM Heist: How Spies Stole the Keys to the Encryption Castle AMERICAN AND BRITISH spies hacked into the internal computer network of the largest manufacturer of SIM cards in the world, stealing encryption keys used to protect the privacy of cellphone communications across the globe, according to top-secret documents provided to The Intercept by National Security Agency whistleblower Edward Snowden. The hack was perpetrated by a joint unit consisting of operatives from the NSA and its British counterpart Government Communications Headquarters, or GCHQ. The breach, detailed in a secret 2010 GCHQ document, gave the surveillance agencies the potential to secretly monitor a large portion of the world’s cellular communications, including both voice and data. The company targeted by the intelligence agencies, Gemalto, is a multinational firm incorporated in the Netherlands that makes the chips used in mobile phones and next-generation credit cards.

America Soon to Become a Corporate North Korea? Annual Fundraising Appeal Over the course of 21 years, we’ve published many unflattering stories about Henry Kissinger. We’ve recounted his involvement in the Chilean coup and the illegal bombings of Cambodia and Laos; his hidden role in the Kent State massacre and the genocide in East Timor; his noxious influence peddling in DC and craven work for dictators and repressive regimes around the world. We’ve questioned his ethics, his morals and his intelligence. 16 Maps That'll Change How You See New York City With such a large and diverse population spread across so many dynamic neighborhoods, it can be hard to get a sense of what New York City is actually like. This series of maps might give you a better idea. The maps show the differences between New York City neighborhoods across a number of factors, including income, unemployment and even noise pollution. The maps were produced by PlaceILive.com, a website that provides hyper-local information on urban neighborhoods.

Detroit Decision: Federal Judge Rules in Favor of Banks and Political Dictatorship Despite failure to negotiate in “good faith” Rhodes says state was justified in filing for bankruptcy Judge Steven Rhodes has ruled that a state-imposed emergency manager was acting legally when bankruptcy was filed over and above the objections of the people of Detroit. The judge also said that pensions guaranteed under the state constitution of Michigan could be diminished. Rhodes said that even though Kevyn Orr, the emergency manager and a former partner to the corporate law firm Jones Day, did not negotiate in good faith with unions, pensioners and creditors, such a process was impractical. A Scrapbook of Late-Night New York A Scrapbook of Late-night New York Photograph by Bobby Doherty By Jay McInerney I am a lifelong insomniac, so it was inevitable that I would make New York my home.

Is Walmart's request of associates to help provide Thanksgiving dinner for co-workers proof of low wages? CLEVELAND, Ohio -- The storage containers are attractively displayed at the Walmart on Atlantic Boulevard in Canton. The bins are lined up in alternating colors of purple and orange. Some sit on tables covered with golden yellow tablecloths. The boy with a seven-inch tale who is worshipped by his neighbours for resembling the Hindu Monkey god Hanuman By Manjeet Sehgal Published: 20:43 GMT, 27 July 2013 | Updated: 01:22 GMT, 28 July 2013 People have been flocking to a tiny village in Punjab to pay obeisance to a boy born with a seven-inch-long tail since his birth in 2001. Though medical experts have described the formation of a tail as a congenital malformation, locals perceive it as a sign of divinity, claiming the child also shares other similarities with Hindu monkey god Hanuman.

Magnetar Goes Long Ohio Town While Shorting Its Tax Base Thousands of brick houses line the streets of Huber Heights, a leafy suburb of Dayton, Ohio, named for the builder who developed it in the 1950s and nurtured its growth. Until this year, his family was the town’s biggest landlord, with a third of all rental housing. Now the tenants’ payments are being routed to a $9 billion hedge fund. Magnetar Capital LLC, investigated by the Securities and Exchange Commission for its housing bets leading up to the property crash, acquired a rental business in January with about 1,900 properties from Charles H. Huber’s widow.

Judith Miller's WMD reporting - New York Times war reporting - Hunt for WMD For critics of the Iraq war, the downfall of Ahmad Chalabi occasioned a hearty, unapologetic outpouring of Schadenfreude—a loud cheer for a well-deserved knee to the administration’s gut. In fact, it was possible to detect a bit of this spirit on the front page of the New York Times. On May 21, the editors arrayed contrasting images of the banker turned freedom fighter turned putative Iranian spy. Here he is smirking behind Laura Bush in the House of Representatives gallery as the president delivers his State of the Union address. The Onion’s Guide To Understanding The Debt Ceiling Crisis The Treasury Department has warned that the continued failure by Congress to raise the debt ceiling would leave the United States unable to pay all of its bills and may force the country to default on its government bonds. Here are some helpful answers to the most common questions about the debt ceiling crisis: What is the debt ceiling? The debt ceiling is a specifically defined yet changeable clause in official federal legislation that ensures that our country becomes embroiled in maddening, childish theatrics every few months or years.

Virtu raises $314M in first IPO of high-speed trader (Bloomberg) -- Virtu Financial Inc. raised $314 million in its initial public offering, after the high-frequency trader's shares were priced at the top of the marketed range. Virtu sold sold 16.5 million Class A shares for $19 each, according to a statement Wednesday, after offering them for $17 to $19. The shares will start trading Thursday, listed on the Nasdaq Stock Market under the symbol VIRT. The firm, which uses computerized strategies to buy and sell everything from stocks to currencies, shelved its original plan for an IPO a year ago after Michael Lewis's Flash Boys directed unprecedented scrutiny onto high-frequency traders.