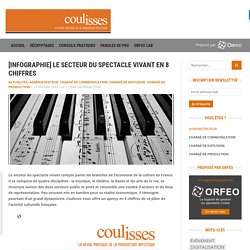 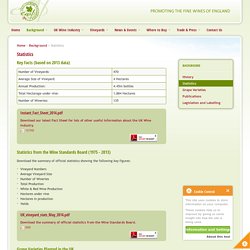 These cookies help us to improve by giving us some insight into how the site is being used. We also use some non-essential cookies to anonymously track visitors or enhance your experience of this site. If you're not happy with this, we won't set these cookies but some nice features on the site may be unavailable. To control third party cookies, you can also adjust your browser settings.

By using our site you accept the terms of our Privacy Policy. (One cookie will be set to store your preference) (Ticking this sets a cookie to hide this popup if you then hit close. Information and SettingsAbout this tool. English Wine Producers. US Wine, USA wine regions. The United States has confidently come of age as one of the world's top wine-producing nations. 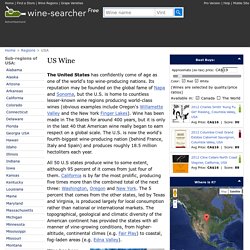 Its reputation may be founded on the global fame of Napa and Sonoma, but the U.S. is home to countless lesser-known wine regions producing world-class wines (obvious examples include Oregon's Willamette Valley and the New York Finger Lakes). Wine has been made in The States for around 400 years, but it is only in the last 40 that American wine really began to earn respect on a global scale.

The U.S. is now the world's fourth-biggest wine-producing nation (behind France, Italy and Spain) and produces roughly 18.5 million hectoliters each year. All 50 U.S states produce wine to some extent, although 95 percent of it comes from just four of them. California is by far the most prolific, producing five times more than the combined total of the next three: Washington, Oregon and New York.

Stars & Stripes: Symbolic of the States. Vinsdefrance. UK Wine Market Shows Surprising 9.4% Growth - Four Trends to Watch. All things considered, the UK wine market has had a good year in 2014 and looks set to keep growing in the year ahead. 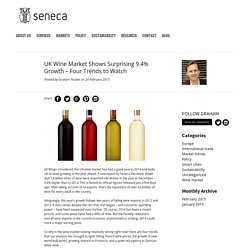 A new report by Seneca this week shows that 1.4 billion litres of wine were imported into Britain in the year to December – 9.4% higher than in 2013. This is based on official figures released just a few days ago. After taking account of re-exports, that’s the equivalent of over 32 bottles of wine for every adult in the country. Intriguingly, this year’s growth follows two years of falling wine imports in 2012 and 2013. It also comes despite the fact that real wages – and consumer spending power – have been squeezed even further. So why is the wine market looking relatively strong right now? 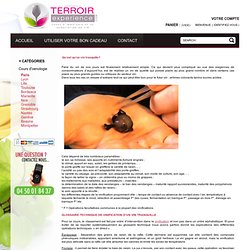 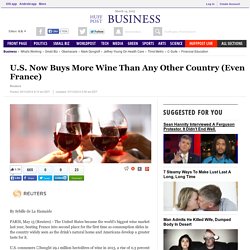 CA%20Wines%20Stat%20Profile%202013.pdf. Wine drinking in America today. What beverage has grown continuously in consumption for the past 20 years in America? 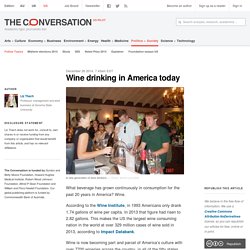 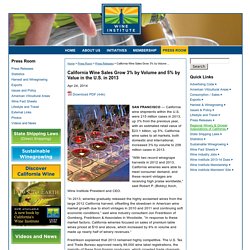 California wine sales to all markets, both domestic and international, increased 3% by volume to 258 million cases in 2013. “With two record winegrape harvests in 2012 and 2013, California wineries were able to meet consumer demand, and these recent vintages are receiving high praise worldwide,” said Robert P. Halshs.archives-ouvertes. New Zealand Trade and Enterprise. The United Kingdom (UK) remains a significant wine importer from around the world. 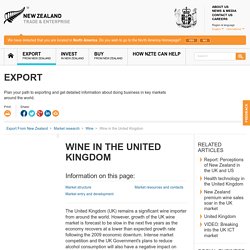 However, growth of the UK wine market is forecast to be slow in the next five years as the economy recovers at a lower than expected growth rate following the 2009 economic downturn. Intense market competition and the UK Government's plans to reduce alcohol consumption will also have a negative impact on market growth. USA becomes world biggest wine market as French drinkers cut down. Wine in the US. Executive Summary In 2013, wine grew by 5% to reach US$40.3 billion. 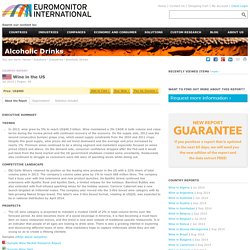 Wine maintained a 3% CAGR in both volume and value terms during the review period with continued recovery of the economy. On the supply side, 2013 saw the second consecutive bumper grape crop, which eased supply constraints from the 2010 and 2011 crops. Despite this good supply, wine prices did not trend downward and the average unit price increased by nearly 1%. Premium wines continued to be a strong segment and marketers especially focused on wines priced US$10 and above.

Wine in the United Kingdom. New Report Guarantee If you purchase a report that is updated in the next 60 days, we will send you the new edition and data extract FREE! Discounters entered wine in full force, which has ultimately forced the major multiples to rethink the way wine is displayed in shopping aisles. Decent quality wine in Aldi and Lidl means players such as Tesco and Waitrose need to push consumers to trade up.

The strategy can work as people are increasingly spending more on quality wine while drinking less. Accolade Wines led wine in 2015 with a total volume share of 12%, thanks to the strong performance of its flagship brand Hardys, proving that it is not all gloom and doom for Australian wine. The big question mark over the future of the UK in Europe is the most important story for the forecast period.