Anti-Intellectualism in the USA 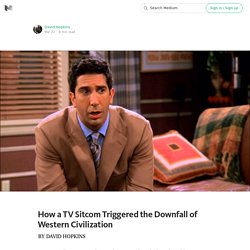 It’s the story of a family man, a man of science, a genius who fell in with the wrong crowd. He slowly descends into madness and desperation, lead by his own egotism. With one mishap after another, he becomes a monster. I’m talking, of course, about Friends and its tragic hero, Ross Geller. You may see it as a comedy, but I cannot laugh with you. The theme song itself is filled with foreboding, telling us that life is inherently deceptive, career pursuits are laughable, poverty is right around the corner, and oh yeah, your love life’s D.O.A. Don’t I feel better? Maybe I should unpack this, for the uninitiated. Eventually, the Friends audience — roughly 52.5 million people — turned on Ross. And like a Greek tragedy, our hero is caught in a prophecy that cannot be avoided. Why such sympathy for Ross? The show ended in 2004. Oklahoma station drops evolution from showing of Cosmos. US public’s acceptance of scientific knowledge erratic. The Associated Press has commissioned a poll that delves into the US public's acceptance of some extremely well-established scientific findings—so established that most scientists would consider them facts. 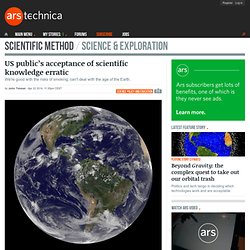 Although some of these facts have clearly entered the public's consciousness, there are a number of issues where US citizens haven't accepted reality. The survey, which had a sample of over 1,000 people (for a margin of error of about three percent), simply stated the facts and then asked people to express how confident they were in the accuracy of the statement.

The pollsters broke it down into three general categories: extremely or very confident, somewhat confident, and what you'd call the doubters: those who were not confident and not confident at all. The good news is that more than 80 percent of those surveyed are strongly confident that smoking causes cancer; only four percent doubt it. Almost Two-Thirds of 18-29 Year Olds Believe in "Demon Possession" What Is Happening to America? October 30, 2013 | Like this article? 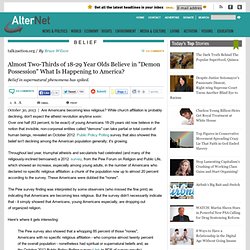 Join our email list: Stay up to date with the latest headlines via email. Are Americans becoming less religious? While church affiliation is probably declining, don't expect the atheist revolution anytime soon: Over one half (63 percent, to be exact) of young Americans 18-29 years old now believe in the notion that invisible, non-corporeal entities called "demons" can take partial or total control of human beings, revealed an October 2012 Public Policy Polling survey that also showed this belief isn't declining among the American population generally; it's growing. Jason Richwine and the censoring of unpalatable academic research - Mail Online. Jason Richwine PhD was a senior policy analyst at the Heritage Foundation from March 2010 to 9th May 2013. 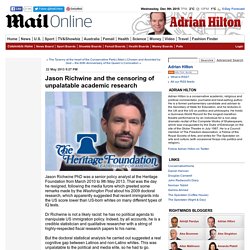 That was the day he resigned, following the media furore which greeted some remarks made by the Washington Post about his 2009 doctoral research, which apparently suggested that recent immigrants into the US score lower than US-born whites on many different types of IQ tests. Dr Richwine is not a likely racist: he has no political agenda to manipulate US immigration policy. Indeed, by all accounts, he is a credible statistician and qualitative researcher with a string of highly-respected fiscal research papers to his name. But the doctoral statistical analysis he carried out suggested a real cognitive gap between Latinos and non-Latino whites.

Half of Americans believe in creationism and just 15 percent accept evolution. By Daily Mail Reporter Published: 15:53 GMT, 5 June 2012 | Updated: 15:57 GMT, 5 June 2012 Nearly half of Americans believe God created mankind in a single day about 10,000 years ago, a literal interpretation of the Bible, according to a new survey that shows the view toward evolution in the United States hasn't changed in 30 years. 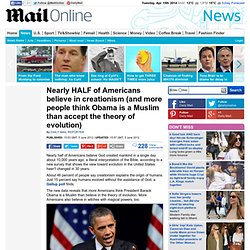 Anti-intellectualism: Political venom moves North. Who could have predicted it? 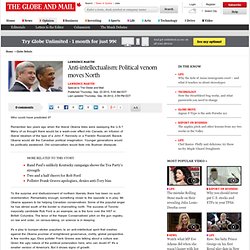 Remember two years ago when the liberal Obama tides were sweeping the U.S.? Between Race and Reason: Anti-Intellectualism in American Life. Anti-Intellectualism: A Republican Weapon of Mass Delusion. Charles, a Liberal Outposts reader from Virginia, wants to know why Michelle Bachman this week denigrated President Obama, as well as her fellow Republican primary opponent Newt Gingrich, by calling them "professorial. 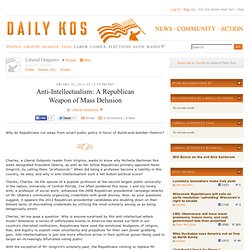 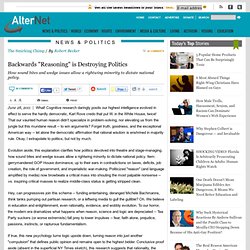 Join our email list: Stay up to date with the latest headlines via email. What! Cognitive research daringly posits our highest intelligence evolved in effect to serve the hardly democratic, Karl Rove credo that put W. in the White House, twice! The Varieties of Anti-Intellectualism. One of the recurring features of American intellectual life is hand-wringing over “anti-intellectualism” by, of course, intellectuals. One of my regular commenters has pointed out that the term and concept of anti-intellectualism are used to describe several distinct phenomena that are relatively easily confused. He’s right, and I think it could bring some clarity to the murkier corners of the culture wars to develop the point.

Note: The term “intellectual” is not infrequently applied to me. By the end of this essay it should be clear why, though I recognize the justice in that application, I’m not completely happy with it. One kind of “anti-intellectualism” is opposition to “intellectuals” considered as an interest group or social class in the Marxian sense – what Russian writers called the intelligentsia. Another kind is what I’ll call traditionalism. Next we come to what I’ll call the epistemic-skeptical anti-intellectual. These are five different phenomena with different sources. The Dumbing Of America. "The mind of this country, taught to aim at low objects, eats upon itself. 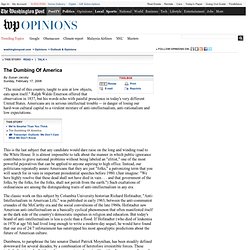 " Ralph Waldo Emerson offered that observation in 1837, but his words echo with painful prescience in today's very different United States. Anti-intellectualism. Intellectual and anti-intellectual: Political cartoonistThomas Nast contrasts the reedy scholar with the bovine boxer, epitomizing the populist view of reading and study as antithetical to sport and athleticism. 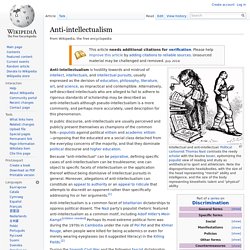 Note the disproportionate heads/bodies, with the size of the head representing "mental" ability and intelligence, and the size of the body representing kinesthetic talent and "physical" ability. Anti-intellectualism is hostility towards and mistrust of intellect, intellectuals, and intellectual pursuits, usually expressed as the derision of education, philosophy, literature, art, and science, as impractical and contemptible. Alternatively, self-described intellectuals who are alleged to fail to adhere to rigorous standards of scholarship may be described as anti-intellectuals although pseudo-intellectualism is a more commonly, and perhaps more accurately, used description for this phenomenon. Distrust of intellectuals[edit] Authoritarianism[edit] In America[edit] 17th century[edit]

Essay:On anti-intellectualism in the United States of America. [edit] Introduction.