Internet History Sourcebooks: Russia sources. Russian Revolution See Main Page for a guide to all contents of all sections. 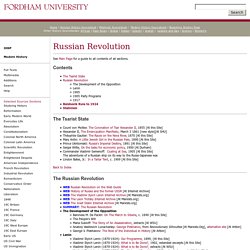 Contents The Tsarist State Russian Revolution The Development of the Opposition Lenin 1905 1905 Party Programs 1917 Bolshevik Rule to 1924 Stalinism The Tsarist State Count von Moltke: The Coronation of Tsar Alexander II, 1855 [At this Site] Alexander II, The Emancipation Manifesto, March 3 1861 [new style][At SHU] Théophile Gautier: The Races on the Neva River, 1870 [At this Site] Mary Antin: A Little Jewish Girl in the Russian Pale, 1890 [At this Site] Prince Ukhtomskii: Russia's Imperial Destiny, 1891 [At this Site] Sergei Witte, On the tasks for economic policy, 1900 [At Durham] Commander Vladimir Semenoff: Coaling at Sea, 1905 [At this Site] The adventures of a Russian ship on its way to the Russo-Japanese war. Lindon Bates, Jr.: In a Tartar Tent, c. 1909 [At this Site] Back to Index. Russian Archives Online. Revelations from the Russian Archives. June 15–July 16, 1992 This exhibition is important for what it represents, what it contains, and what it suggests. 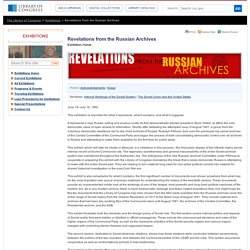 It represents a new Russia, willing and anxious under its first democratically elected president, Boris Yeltsin, to affirm the core democratic value of open access to information. Shortly after defeating the attempted coup of August 1991, a group from the victorious democratic resistance led by the chief archivist of Russia, Rudolph Pikhoia, took over the previously top secret archives of the Central Committee of the Communist Party and began the process of both consolidating democratic control over all archives in Russia and attempting to make them available for the first time for public study.

This exhibit, which will later be shown in Moscow, is a milestone in this process—the first public display of the hitherto highly secret internal record of Soviet Communist rule. Seventeen Moments in Soviet History. Russian Revolution: Ten propaganda posters from 1917. The Russian Revolution was a time of great upheaval but also great creativity. 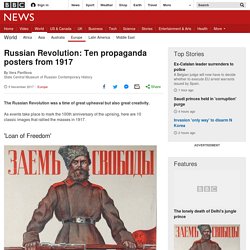 As events take place to mark the 100th anniversary of the uprising, here are 10 classic images that rallied the masses in 1917. 'Loan of Freedom' Image copyright sovrhistory.ru The cost and effort of fighting in World War One took a huge toll on Russia and fuelled the rebellion against the tsar in early 1917. Boris Kustodiev's famous painting of a soldier with a rifle urged Russians to give money to the war effort. Revolutionary days In March 1917, Moscow's Voskresenskaya Square and the city's parliament building became a focal point for revolutionary rallies. 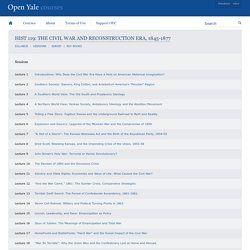 Slavery and the African-American experience 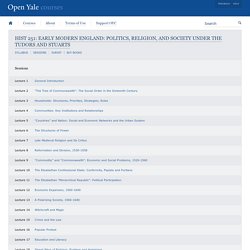 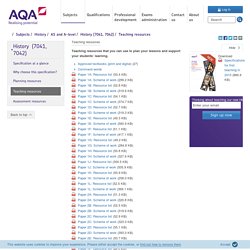