Immediately stop fracking on public lands. New revelations about fracking and methane — the potent global warming pollutant it unleashes from below ground — are raising alarm bells that call into question the heart of President Obama’s entire energy policy. 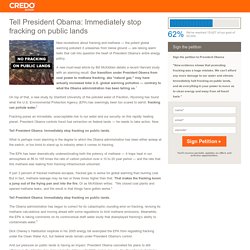 A new must-read article by Bill McKibben details a recent Harvard study with an alarming result: Our transition under President Obama from coal power to methane fracking, aka "natural gas," may have actually increased total U.S. global warming pollution — contrary to what the Obama administration has been telling us.1 On top of that, a new study by Stanford University of the polluted water of Pavillion, Wyoming has found what the U.S. Environmental Protection Agency (EPA) has seemingly been too scared to admit: fracking can pollute water.2 Fracking poses an immediate, unacceptable risk to our water and our security on this rapidly heating planet. President Obama controls fossil fuel extraction on federal lands — he needs to take action. It’s Time For the Rubber Stamp Rebellion. The winds of change are gaining speed, and Beyond Extreme Energy is working hard to make them even stronger. 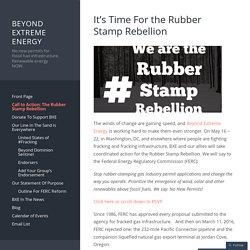 On May 16 – 22, in Washington, DC, and elsewhere where people are fighting fracking and fracking infrastructure, BXE and our allies will take coordinated action for the Rubber Stamp Rebellion. We will say to the Federal Energy Regulatory Commission (FERC): Stop rubber-stamping gas industry permit applications and change the way you operate. Prioritize the emergence of wind, solar and other renewables above fossil fuels. Sign the Petition: Ban Fracking on Public Lands!

Fracking has already caused serious damage to our public lands and precious climate. 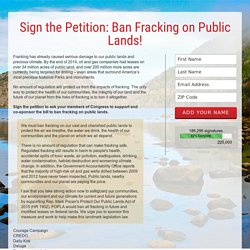 By the end of 2014, oil and gas companies had leases on over 34 million acres of public land, and over 200 million more acres are currently being targeted for drilling – even areas that surround America’s most precious National Parks and monuments. Push to ban fracking in Michigan moves forward. LANSING (WXYZ) - The Michigan Board of Canvassers voted today to green light a group that's push to end fracking throughout the state. 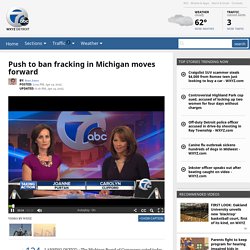 In a 3-0 vote, the board approved the forms needed to collect signatures in the group's effort to prohibit the controversial drilling practice from taking place statewide. Short for hydraulic fracturing, fracking is the process of drilling deep into the ground and pumping a high pressure mix of water and chemicals into shale rocks. It fractures the rock and releases the natural gas inside. The process has been linked to possible health risks.

Meet the Andy Griffith who’s going after fracking polluters. Back when I was a city reporter in San Francisco, one of my jobs was to take the daily crime report and type it up in a friendly, engaging way. 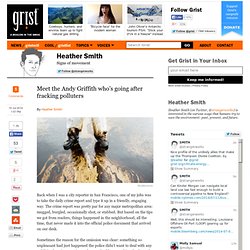 The crime report was pretty par for any major metropolitan area: mugged, burgled, occasionally shot, or stabbed. But based on the tips we got from readers, things happened in the neighborhood, all the time, that never made it into the official police document that arrived on our desk. Sometimes the reason for the omission was clear: something so unpleasant had just happened the police didn’t want to deal with any publicity from it. Sometimes whatever had happened involved people who weren’t into filling out police reports. And sometimes, I suspect, whoever was typing up the crime report just thought the crime was boring. 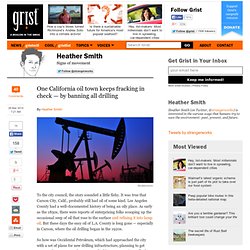 It was true that Carson City, Calif., probably still had oil of some kind. Los Angeles County had a well-documented history of being an oily place. Los Angeles Bans Fracking - westsidetoday.com. Politicians Who Support Fracking Are Starting to Pay a Political Price. March 10, 2014 | Like this article? 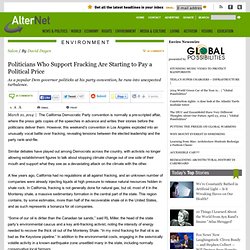 Join our email list: Stay up to date with the latest headlines via email. Fracking opponents win big in Pennsylvania. Poor Being Fracked in Pennsylvania (Video) Residents of the Riverdale Mobile Homes Park in rural Lycoming County, Pennsylvania, are being evicted and offered little compensation to make way for a fracking operation. 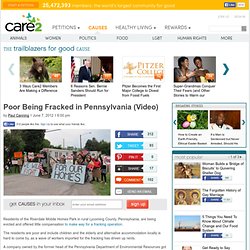 The residents are poor and include children and the elderly and alternative accommodation locally is hard to come by, as a wave of workers imported for the fracking has driven up rents. A company owned by the former head of the Pennsylvania Department of Environmental Resources got the land re-zoned, possibly illegally, as industrial and wants to build a pumping station to withdraw up to 3 million gallons of water per day from the Susquehanna River. Water & oil: How natives & neighbors of the Sacred Headwaters battled drillers and won. Native American groups increasingly at the center of fights over oil and gas. In the 17th, 18th, and early 19th centuries, European settlers stole a lot of land from Native Americans. 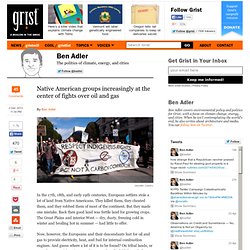 They killed them, they cheated them, and they robbed them of most of the continent. But they made one mistake. Back then good land was fertile land for growing crops. The Great Plains and interior West — dry, dusty, freezing cold in winter and broiling hot in summer — had little to offer. Now, however, the Europeans and their descendants lust for oil and gas to provide electricity, heat, and fuel for internal combustion engines. Water & oil: Under threat, Sacred Headwaters’ immune system kicks in. Editor’s note: This is part 2 of Grist’s series on the Sacred Headwaters. 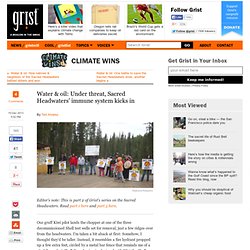 Read part 1 here and part 3 here. Our gruff Kiwi pilot lands the chopper at one of the three decommissioned Shell test wells set for removal, just a few ridges over from the headwaters. I’m taken a bit aback at first: Somehow, I thought they’d be taller. Instead, it resembles a fire hydrant propped up a few extra feet, circled by a metal bar fence that reminds me of a city bike rack. Anti-fracking activist barred from 312.5 square miles of Pennsylvania. Vera Scroggins, an outspoken opponent of fracking, is legally barred from the new county hospital. Also off-limits, unless Scroggins wants to risk fines and arrest, are the Chinese restaurant where she takes her grandchildren, the supermarkets and drug stores where she shops, the animal shelter where she adopted her Yorkshire terrier, the bowling alley, the recycling center, the golf club, and the lake shore.

In total, 312.5 square miles are no-go areas for Scroggins under a sweeping court order granted by a local judge that bars her from any properties owned or leased by one of the biggest drillers in the Pennsylvania natural gas rush, Cabot Oil & Gas Corporation. “They might as well have put an ankle bracelet on me with a GPS on it and be able to track me wherever I go,” Scroggins said. Will Massachusetts become the second state to ban fracking?

Legislation that would impose a 10-year moratorium on hydraulic fracturing is making its way through the Massachusetts state legislature. On Wednesday, the Joint Committee on Environment, Natural Resources and Agriculture passed the bill, which would also prohibit the dumping of fracking wastewater in the state. “Although the state isn’t seen as a rich source of shale gas, there could be limited deposits in western Massachusetts,” the Associated Press reports. As EcoWatch explains, “Local concern about fracking has grown since the U.S. Geological Survey identified shale gas deposits in the Pioneer Valley last December. Moreover, as New York mulls large-scale fracking next door, drilling operators could soon view Western Massachusetts as a convenient dumping ground for toxic fracking wastewater.”

New Mexico county is first in the nation to ban all drilling and fracking. Mora County, N.M., has a message for the oil and gas industry: “You’re not welcome here.” Don't Frack With California. The fracking boom has made its way to California. Companies are already fracking in at least six counties and they’re poised to expand operations. Fracking involves blasting millions of gallons of water, along with sand and toxic chemicals, deep into the earth to break up rocks and extract oil and gas.

One Virginia County Says NO To Fracking. Fracking (the natural gas drilling method known as hydraulic fracturing, which uses high pressure blasts of water mixed with a chemical cocktail to break the rock and unlock the gas), has been losing popularity recently. Hooray! In December, 2011, the U.S. Environmental Protection Agency officially blamed fracking for water contamination in Wyoming. 5 States Leading The Fight Against Hydraulic Fracturing. This Land Is Our Land. The Numbers Don’t Lie – lease sales undercut industry claims.

To hear the oil and gas industry tell it, we just aren’t drilling enough. Cowboys, hunters, and enviros team up to fight natural gas drilling. If you take off in a plane from the airport in Aspen, Colo., you’ll soon see exactly what natural gas drilling looks like — and exactly why so many residents of the surrounding region, from ranchers to business owners to greens, are fighting to keep it in check. Fly north over the Thompson Divide, a region mostly contained within the White River National Forest, and all you see is green, lush mountains and valleys. This is a habitat for migratory species from birds to elk.