How To Write Gallifreyan By ~BlackHatGuy 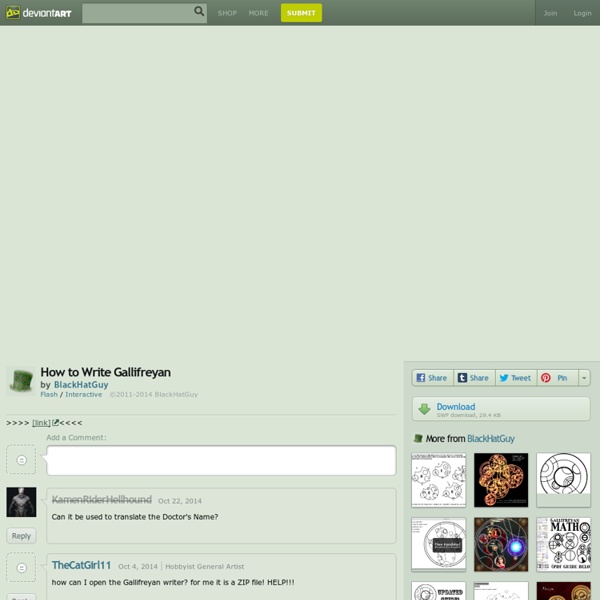 TARDIS: Police Box Door Decals This is a door decal that makes any 30" x 79" door look like a TARDIS police box. You can find them on Amazon from different sellers for $27 - $50, depending on how much you love or hate saving money. I'm not going to get one. Not because I don't like them, but because I already bought that TARDIS fridge decal, and the last thing I need is to be heading for a midnight snack and fall down the basement stairs. Thanks again to carey, who promised to buy me one but didn't bother asking for my address or anything so she could actually send it to me so I'm not getting my hopes up.

Your Own Cardboard Stand-Up TARDIS Alternatively, paint a refrigerator box. This is the cardboard stand-up TARDIS available for $225 pre-order from Urban Collector. That's a lot of money for cardboard. Thanks to lilco, who built a time-machine out of an old dryer. The TARDIS Shower Caddy Rack Because there is literally no TARDIS themed product a hardcore Whovian won't buy, this is the $45 Doctor Who TARDIS Shower Rack from ThinkGeek. It holds your shampoo and soap and shower scrunchies. Speaking of -- you ever timed yourself to see how long you can squeeze your roommate's loofah between your buttcheeks while you shower? That is like, MY THING. Keep going for a shot of the rack in use with a surprising deficit of women's hair stuck to the shower wall. Thanks to Christina and aubrey, who SHOWER POWER.

Doctor Who TARDIS Shower Curtain This is the Doctor Who TARDIS Shower Curtain available from ThinkGeek ($30). I just bought one. Is it gonna make my shower bigger on the inside? Nope, but it is gonna make it colder since now I don't have enough to pay the gas bill. I'm pretty sure I willed this thing into existence after make a TARDIS joke in the post about that Star Trek transporter shower curtain last week. Keep going for a shot of somebody's mom poking out from behind the thing with what appears to be a Sonic Screwdriver "personal massager". Thanks to Bria, who sent me some sort of erotic fan fiction about showering with the 11th Doctor which I only glanced over because now is not the time to get hot and bothered.

Star Trek Transporter Shower Set Ever dreamed of sitting on the can next to a shower curtain that looks like the original transporter room from Star Trek? Well you're in luck, because this $50 shower curtain and bathmat set from ThinkGeek does just that. You know what would make it even cooler? Keep going for a shot of the set outside their natural habitat. Thanks to TBTMH, who agrees the best shower curtains are the ones you can half see through so you can peep your lover's privates while you brush your teeth.