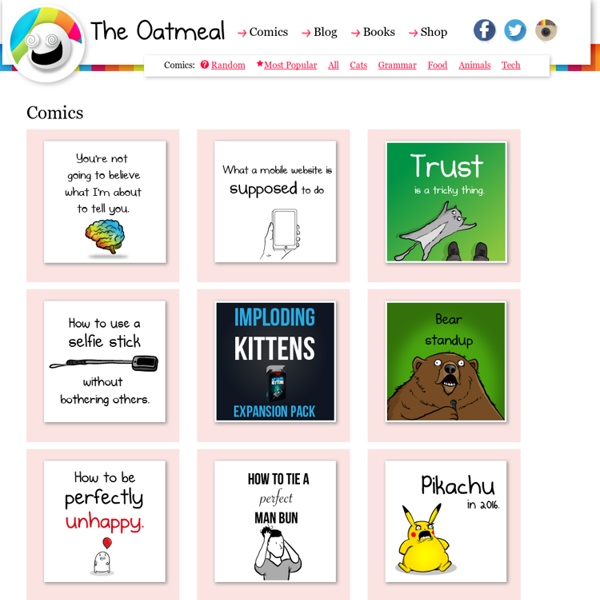 This is a comic about the backfire effect. The first big expansion pack of Exploding Kittens is now shipping. It contains 20 game-changing cards, along with a human-sized cone of shame. I made a new thing. Next Page » All artwork and content on this site is Copyright © 2016 Matthew Inman.

Department of English and Comparative Literature What is a Bildungsroman? In my examination, I will attempt to answer this misleadingly simple question. The term was suggested by Friedrich von Blanckenburg's discussion of Bildung in his 1774 "Essay on the Novel," coined by Karl Morgenstern in the 1820s, and popularized by Wilhelm Dilthey in his 1870 essay on Friedrick Schleiermacher. Therefore, when we 20th Century readers talk of the Bildungsroman, as we often do, we employ a critical lens honed in 19th Century Germany to treat a genre begun in the 18th Century. Lesson 1377 - Easter Hey, it helps explain the Eucharist. Happy birthday to my sister Hanna! Sorry I couldn't think of a better comic than the one above. STUDENT PRESENTATIONS: Still accepting submissions for your comic to run during my paternity leave, as long as you email it in by next Friday!

Funnyexam.com - Hilarious exam answers Q. What is meant by the term 'hermaphrodite'? A. Lady Gaga Q. Thanksgiving as a kid VS Thanksgiving as an adult - The Oatmeal - StumbleUpon All artwork and content on this site is Copyright © 2014 Matthew Inman. Please don't steal. TheOatmeal.com was lovingly built using CakePHP All artwork and content on this site is Copyright © 2014 Matthew Inman. What Makes a Hero: Joseph Campbell’s Seminal Monomyth Model for the Eleven Stages of the Hero’s Journey, Animated By Maria Popova Nearly four decades before Joseph Campbell (March 26, 1904–October 30, 1987) refined his enduring ideas on how to find your bliss and have fulfilling life, the legendary mythologist penned The Hero with a Thousand Faces (public library) — his seminal theory outlining the common journey of the archetypal hero across a wealth of ancient myths from around the world. Campbell’s monomyth model has since been applied to everything from the lives of great artists to pop-culture classics like Star Wars. This wonderful short animation from TED Ed presents a synthesis of Campbell’s foundational framework for the eleven stages of the hero’s quest — from the call to adventure to the crisis to the moment of return and transformation — illustrating its timeless potency in illuminating the inner workings of so many of our modern myths and the real-life heroes we’ve come to worship:

SUBNORMALITY! All content copyright Winston Rowntree, 2015. Museum previously seen here and then here. Satirical Illustrations by Pawel Kuczynski Polish illustrator Pawel Kuczynski cleverly uses satire to portray today’s social, political and cultural reality. At first sight, his illustrations might seem funny, but when you look closer, they actually show some serious problems of today’s world. Born in 1976, Pawel is a graduate of Fine Arts Academy in Poznan. The artist began drawing satirical illustrations back in 2004, and so far has been “rewarded with 92 prizes and distinctions“. In 2005, Pawel Kuszynski received “Eryk” award from Association of Polish Cartoonists for getting a record number of awards in international competitions

Thing in a Jar - StumbleUpon Thing in a Jar 7 inches by 4 inches, mason jar Pictured above is the Thing in a Jar that's usually sitting in my office at work. The coolest thing about the Thing is that everyone responds to seeing it by asking questions. Curious Incident of the Teacher in the Classroom Introduction to Greek Theatre & Antigone: Tufts University’s Perseus Digital Library “The Development of Athenian Tragedy,” excerpted from Thomas R. Martin’s An Overview of Classical Greek History from Mycenae to Alexander. GoComics Updated comics shown as Example Comic Name . 2 Cows and a Chicken by Steve Skelton 15739

Gutters It seems like these days the legal spats between creators and publishers, or creators themselves are taking up all the headlines on comic websites. Gary Friedrich is being counter-sued by Marvel after failing to win a share in the rights to Ghost Rider. The Kirby and Siegel families continue their pusuits and Archie Comics is doing battle in court against its very own CEO. Seriously, at this rate there is bound to be a Law & Order spinoff show set entirely in the comics world. Take five minutes and chuckle Every year, English teachers from across the country can submit their collections of actual similes and metaphors found in high school essays. These excerpts are published each year to the amusement of teachers across the country. Here are last year's winners: 1. Her face was a perfect oval, like a circle that had its two sides gently compressed by a thigh Master.