Rebooting news making and videojournalism and how creativity is forcing change. Nineteen eight-seven Looking across the auditorium at some of the US’ most respected educators, Donald Schön presented a simple yet powerful tale he had recounted several times. 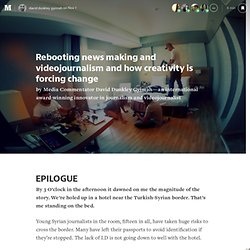 Its impact was no less emphatic for professionals who were not educators, such as designers, health workers, and for that matter journalists. You’re riding a bike and you begin to fall to the left. How do you quickly regain your composure? Turn RightTurn LeftI don’t knowIt’s an irrelevant question The answer, the MIT social scientist said was to turn into the left. Often, we might know what to do, without necessarily being able to put this into words. Doctors will sometimes detect an illness, not based on a clinical diagnosis but a hunch. Well, swathes of journalists have creatively thought through the process of compiling a report against a deadline when the odds have been stacked against them — but there’s a catch.

Google will 'know you better than your intimate partner' A bird’s-eye view of drone journalism. By Catherine Payne, NAA content producer Drones are generating buzz, but drone journalism in the USA remains grounded – at least for now. 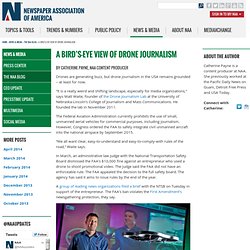 “It is a really weird and shifting landscape, especially for media organizations,” says Matt Waite, founder of the Drone Journalism Lab at the University of Nebraska-Lincoln’s College of Journalism and Mass Communications. He founded the lab in November 2011. The Federal Aviation Administration currently prohibits the use of small, unmanned aerial vehicles for commercial purposes, including journalism. However, Congress ordered the FAA to safely integrate civil unmanned aircraft into the national airspace by September 2015. Wall Street Journal to Advertisers: We're More Innovative Than You Think. The Wall Street Journal, the 124-year-old broadsheet, wants advertisers to know that it "gets" video as well as digital in general. 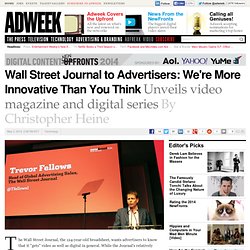 While the Journal's relatively affluent viewer demographics are envied in the publishing community, it's still one of many traditional news outlets that face challenges in concerns to perceptions in an increasingly BuzzFeedy content world. "We really want to sit down and ideate with advertisers," Trevor Fellows, head of global media sales at the Dow Jones-owned news brand, told Adweek after his team's NewFronts presentation this morning.

CUNY to Launch Master’s in Social Journalism. Some big news at CUNY: We are developing a new master’s degree in social journalism. 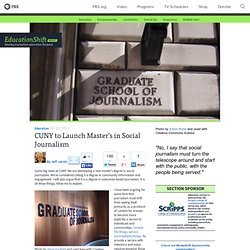 We’ve considered calling it a degree in community information and engagement. I will also argue that it is a degree in outcomes-based journalism. It is all those things. Columbia’s Lede Program Aims to Go Beyond the Data Hype. This all began at Joe’s Coffee on the Columbia University campus one morning last spring. 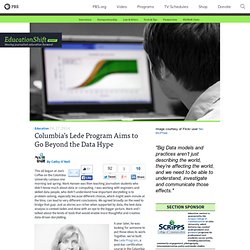 Mark Hansen was then teaching journalism students who didn’t know much about data or computing. I was working with engineers and skilled data people, who didn’t understand how important storytelling is to problem-solving, especially because different choices, which might seem minute at the time, can lead to very different conclusions. We agreed broadly on the need to bridge that gap: Just as stories are richer when supported by data, the best data analysis is context-laden and done with an eye to the bigger picture.

Mark and I talked about the kinds of tools that would enable more thoughtful and creative data-driven storytelling. NBCUniversal to Create Original Shows for Hulu, Channel Sites, VOD. NBCUniversal is moving forward with what it calls a “robust original video programming initiative” focused on creating and distributing original series for its digital platforms. 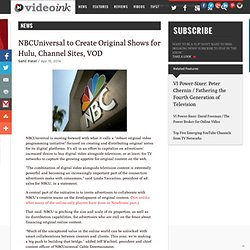 It’s all in an effort to capitalize on advertisers’ increased desire to buy digital video alongside television, or at least, for TV networks to capture the growing appetite for original content on the web. “The combination of digital video alongside television content is extremely powerful and becoming an increasingly important part of the connection advertisers make with consumers,” said Linda Yaccarino, president of ad sales for NBCU, in a statement. A central part of the initiative is to invite advertisers to collaborate with NBCU’s creative teams on the development of original content. (Not unlike what many of the online-only players have done in Newfronts past.) “Much of the uncaptured value in the online world can be unlocked with smart collaborations between creators and clients. Serious Newspaper Journalism Is Not Over. And then there’s that old Chinese curse: May your dreams come true. 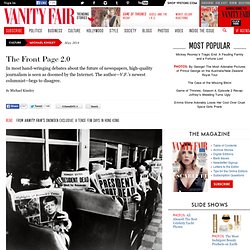 If you could go back to, say, 1994, two decades ago, and if you could have told newspaper publishers that soon they’d be able to produce and distribute a daily newspaper at no cost for newsprint (that’s the paper, not the ink), that they could shut down those huge presses and dispense with troublesome unions once and for all, and that they wouldn’t even need paperboys (or girls) anymore to throw the paper into the neighbor’s bushes—if you could have told them that all these costs were about to plummet to near zero—the publishers would have thought, Now, that sounds like a pretty great deal.

I’ll take it. So how has this unexpected gift from God turned into such a disaster for them? There must be large amounts of either incompetence or bad luck involved. Anyone, like me, whose solution is a vague “Things will work out somehow” lacks standing to blame the problem on other people’s incompetence. It was a bold argument. Ontologies. (Re)defining multimedia journalism — Changing Journalism. How some journalists are using anonymous secret-sharing apps. Gwyneth Paltrow’s divorce from rock star husband Chris Martin is not an event with great civic impact. 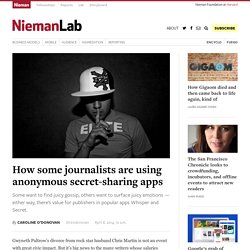 But it’s big news to the many writers whose salaries depend on highly trafficked stories about celebrities, as well as to the massive audience that loves to read them. What’s interesting, however, is that while the couple’s uncoupling was officially announced on Paltrow’s personal website, rumors of trouble in the water started circulating weeks before. Rob Horowitz: Social Media: Key Component of the ‘New’ News Media. Email to a friendPermalink Tuesday, April 01, 2014 Rob Horowitz, GoLocalProv MINDSETTER™ As the new mainly digital news media structure takes shape, it is clear that social media is emerging as a key component, believes Rob Horowitz. 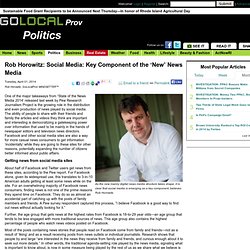 The newsonomics of WSJ Live. In the Expanding World of Times Video, a Boss 'From Another Planet' When Rebecca Howard came to The Times about six months ago to run its newsroom video-production operation, one of her first moves was to discontinue something called TimesCast. 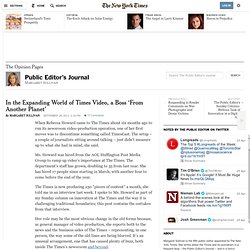 The setup – a couple of journalists sitting around talking – just didn’t measure up to what she had in mind, she said. Ms. Howard was hired from the AOL Huffington Post Media Group to ramp up video’s importance at The Times. The department’s staff has grown, doubling to 55 from last year. How digital journalism has changed over the past 15 years. ShareThis By Diana Pereira In about a month, I'll celebrate my 15th year in the world of digital journalism—an industry that's constantly evolving. Just last week, I asked my class of master’s students at Ryerson University's school of journalism to attend a lecture with me.

Why? Social journalism and open platforms are the new normal — now we have to make them work. What happens when everyone has the ability to publish? One thing that happens is the traditional media industry loses much of its power, over both the content that people read and the advertising that helps support it — but the other thing that happens is a profusion of content of all kinds, from “citizen journalists” to brands and advocacy groups and everything in between. How can media entities take advantage of this phenomenon without losing their way in the process? In a nutshell, that’s the dilemma that Ed Sussman tackles in a recent post on Pando. Sussman, CEO of a site called Buzzr, is a former president of FastCompany.com who helped turn the website into an early hybrid of publisher and platform — or what Jonathan Glick of Sulia has referred to as a “platisher” (a horrible-sounding term that I sincerely hope will never catch on).

The newsonomics of how the news industry will be tested in 2014. Our 2014 stage is set, and oh what a marvelous assortment of characters will be walking across it. Editor & Publisher ® The newsonomics of Schibsted’s VGTV and web-native TV. Digital publishers chase video with mixed results. For digital publishers burned by sinking display ad revenue, video is the next great hope.

Publications like Mashable, Business Insider, Vox Media are all giving video a go, building their own video units and cranking out content in an effort to go from being simple text-based publishers to something far more ambitious. Unlike desktop and mobile display, video holds the promise of high ad rates — up to 10 times higher than banner ads — and higher valuations for the companies investing in it.

Best practices for journalists. Journalists and news publishers have long sought the best ways to create engagement on Twitter and make the most of every Tweet - and we want to help. The Transition to Digital Journalism. Glass Video: Wrigley Field Meltdown. Ezra Klein, Glenn Greenwald and the odd rise of personal brand journalism. Vine Journalism Awards showcases the best examples of 6-second news. Media.dssimon.com/2014WebInfluencersSurvey/2014WebInfluencersSurveyVersion2.pdf.

Sort : CJR's Guide to Online News Startups. YCRFS 1: The Future of Journalism. Online News Websites Funding by Venture Capital : CJR's Guide to Online News Startups. The new Medicis funding journalism. ACEJMC Homepage. Annual Surveys of Journalism and Mass Communication. The Norman Lear Center: About. Audience-Key-Findings2. Economics-Key-Findings5. The newsonomics of selling more stuff. The Newspaper Industry Overall. Newsweek By the Numbers. Formula for Change. Understanding the Accelerating Rate of Change. The Future of the News Business: A Monumental Twitter Stream All in One Place.