The Economist explains: The thinking behind feminist economics. ECONOMICS, a discipline of policy wonks, talking heads, and this publication, is meant to offer an objective way of looking at the world. 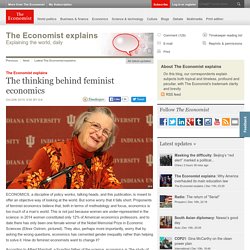 But some worry that it falls short. Proponents of feminist economics believe that, both in terms of methodology and focus, economics is too much of a man’s world. This is not just because women are under-represented in the science: in 2014 women constituted only 12% of American economics professors, and to date there has only been one female winner of the Nobel Memorial Prize in Economic Sciences (Elinor Ostrom, pictured). They also, perhaps more importantly, worry that by asking the wrong questions, economics has cemented gender inequality rather than helping to solve it. How do feminist economists want to change it? According to Alfred Marshall, a founding father of the science, economics is “the study of men as they live and think and move in the ordinary business of life.”

Proponents of feminist economics have won many battles. Johanna Brenner: The Best of Times, the Worst of Times: US Feminism Today. New Left Review I/200, July-August 1993. Inverse of a Matrix using Elementary Row Operations (Gauss-Jordan) Also called the Gauss-Jordan method. 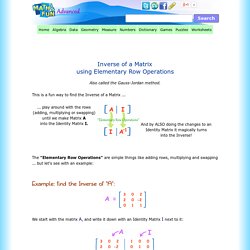 Now we do our best to turn "A" (the Matrix on the left) into an Identity Matrix. But we can only do these "Elementary Row Operations": swap rows multiply or divide each element in a a row by a constant replace a row by adding or subtracting a multiple of another row to it And we must do it to the whole row, like this: Start with A next to I Add row 2 to row 1, then divide row 1 by 5, The Disutility of Work. Why do we work? 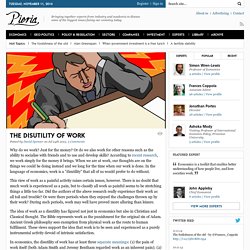 Just for the money? Or do we also work for other reasons such as the ability to socialise with friends and to use and develop skills? According to recent research, we work simply for the money it brings. When we are at work, our thoughts are on the things we could be doing instead and we long for the time when our work is done. In the language of economics, work is a "disutility" that all of us would prefer to do without. This view of work as a painful activity raises certain issues, however. The idea of work as a disutility has figured not just in economics but also in Christian and Classical thought. The point I would make is that work means more to us than just the money it brings. To be sure, work is often endured by workers but this does not reflect anything intrinsic to work as such, rather it reflects on the way that work is organised. There is a deeper issue here with regards to the conception of human nature.

What Is a Residual Claimant? The residual claimant is the agent who receives the remainder of a random amount once predictable payments are made. 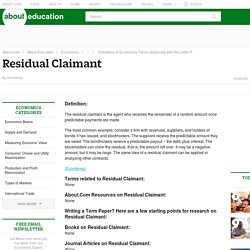 What is business owner? definition and meaning. Dictionary of Economics. ‘strongly recommended as a handy work of reference … this book deserves to sell well to a wide audience’ Times Higher Education Supplement An authoritative and comprehensive dictionary containing 2,500 key economic terms with clear, concise definitions. 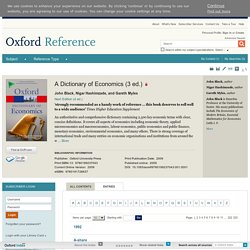 It covers all aspects of economics including economic theory, applied microeconomics and macroeconomics, labour economics, public economics and public finance, monetary economics, environmental economics, and many others. There is strong coverage of international trade and many entries on economic organizations and institutions from around the world. This edition contains expanded coverage of common econometric concepts and highlights major theoretical concepts including agency, competition, equilibrium. Fully revised and updated, this edition now features recommended web links at entry level. An authoritative and comprehensive dictionary containing 2,500 key economic terms with clear, concise definitions. Bibliographic Information.