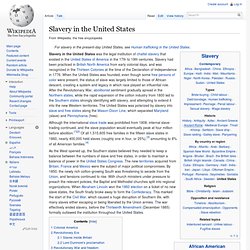 Slavery had been practiced in British North America from early colonial days, and was recognized in the Thirteen Colonies at the time of the Declaration of Independence in 1776. When the United States was founded, even though some free persons of color were present, the status of slave was largely limited to those of African descent, creating a system and legacy in which race played an influential role. Colonial Slavery. The Peculiar Institution. The Peculiar Institution of American Slavery Antebellum Slavetrading Storefront The whole commerce between master and slave is a perpetual exercise of the most unremitting despotism on the one part, and degrading submission on the other. 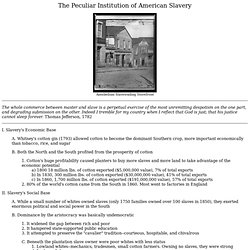 Indeed I tremble for my country when I reflect that God is just; that his justice cannot sleep forever. Thomas Jefferson, 1782 I. A. B. 1. B. 1. D. E. Blight Vid 3 - A Southern World View: The Old South and Proslavery Ideology. VID+ Slavery (1819-54) The Impending Crisis of the South. The Impending Crisis of the South: How to Meet It is a book written by Hinton Rowan Helper of North Carolina, which he self-published in New York, 1857.[1] It was a strong attack on slavery as inefficient and a barrier to the economic advancement of whites. 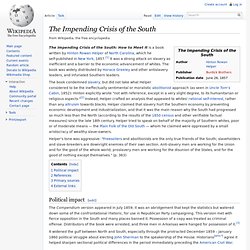 The book was widely distributed by Horace Greeley and other antislavery leaders, and infuriated Southern leaders. The book condemned slavery, but did not take what Helper considered to be the ineffectually sentimental or moralistic abolitionist approach (as seen in Uncle Tom's Cabin, 1852): Hinton explicitly wrote "not with reference, except in a very slight degree, to its humanitarian or religious aspects. "[2] Instead, Helper crafted an analysis that appealed to whites' rational self-interest, rather than any altruism towards blacks.

Helper's tone was aggressive: "Freesoilers and abolitionists are the only true friends of the South; slaveholders and slave-breeders are downright enemies of their own section. Political impact[edit] The Southern Argument for Slavery. Southern slaveholders often used biblical passages to justify slavery. 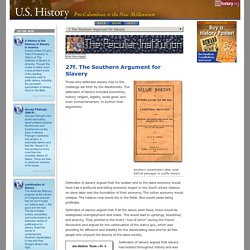 Those who defended slavery rose to the challenge set forth by the Abolitionists. The defenders of slavery included economics, history, religion, legality, social good, and even humanitarianism, to further their arguments. John C. Calhoun. George Fitzhugh. John Henry Hammond. Mudsill Theory. Speech to the U.S. 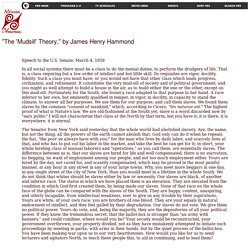 Senate, March 4, 1858 In all social systems there must be a class to do the menial duties, to perform the drudgery of life. That is, a class requiring but a low order of intellect and but little skill. Its requisites are vigor, docility, fidelity. Such a class you must have, or you would not have that other class which leads progress, civilization, and refinement. It constitutes the very mud-sill of society and of political government; and you might as well attempt to build a house in the air, as to build either the one or the other, except on this mud-sill. 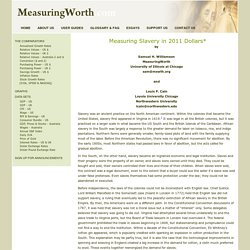 Williamson MeasuringWorth University of Illinois at Chicago sam@mswth.org and Louis P. Slavery was an ancient practice on the North American continent. In the South, on the other hand, slavery became an ingrained economic and legal institution. Before independence, the laws of the colonies could not be inconsistent with English law. Slavery is a subject that most Americans have confronted as part of their education, but there are many aspects of slavery that have been left to the dim mists of history. Comments posted to MeasuringWorth (see the appendix) indicate there is considerable current public interest -- and public confusion -- in regard to such questions. Why does anything have value? A monetary value can be measured by a transaction when something is bought and sold, or as an expected value of an asset currently held. Other assets may have value because of their potential resale value, such as land or a rare painting. Figure 1 Figure 2. VID: Slavery and the Early American economy. 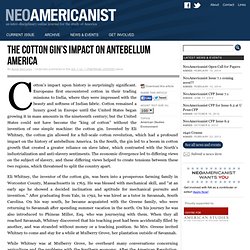 Europeans first encountered cotton in their trading missions to India, where they were impressed with the beauty and softness of Indian fabric. Cotton remained a luxury good in Europe until the United States began growing it in mass amounts in the nineteenth century; but the United States could not have become the “king of cotton” without the invention of one simple machine: the cotton gin. Invented by Eli Whitney, the cotton gin allowed for a full-scale cotton revolution, which had a profound impact on the history of antebellum America. In the South, the gin led to a boom in cotton growth that created a greater reliance on slave labor, which contrasted with the North’s industrialization and anti-slavery sentiments. The economic divergence led to differing views on the subject of slavery, and these differing views helped to create tensions between these two regions, which threatened to split the country apart.

Value of Cotton Exports 1800-1860. Growth of Cotton and Slave Population.