Story. Bank of America Merrill Lynch has become the first bank to call for a Canadian recession this year. 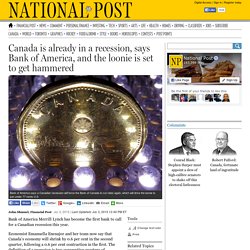 Economist Emanuella Enenajor and her team now say that Canada’s economy will shrink by 0.6 per cent in the second quarter, following a 0.6 per cent contraction in the first. The definition of a recession is two consecutive quarters of contraction. CDHill sur Twitter : "#Harper said at #stampede he's not worried about #economy at all-Maybe that's the problem #idiot #cdnpoli. World Economic Forum sur Twitter : "How did #Greece's economy get into such a mess? #Grexit #economics...

How did the Greek economy get into such a mess? The Greek debt crisis has entered a crucial stage: new proposals for Greek reforms have been welcomed by Eurozone leaders and have raised hopes that a deal can be struck to stop Greece defaulting on its debt. 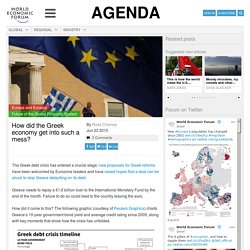 Greece needs to repay a €1.6 billion loan to the International Monetary Fund by the end of the month. Failure to do so could lead to the country leaving the euro. Larry Savage sur Twitter : "Trickle-down #economics. #canlab #cdnpoli #IncomeInequality #GrowingGap #capitalism... World Economic Forum sur Twitter : "What is the #minimumwage around the world? @OECD #economics... What is the minimum wage around the world? Barbarism of Berlin sur Twitter : "Nobel Prize winning economist Robert Shiller: "#Economics is about the stories people believe" The truth about who’s subsidising who in Europe. Angela Merkel and Italian PM Matteo Renzi – Germany is making a mint from Italian debt. 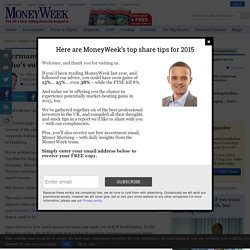 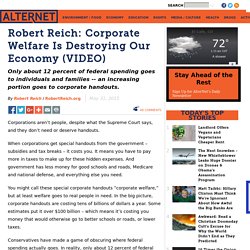 When corporations get special handouts from the government – subsidies and tax breaks – it costs you. It means you have to pay more in taxes to make up for these hidden expenses. And government has less money for good schools and roads, Medicare and national defense, and everything else you need. Meanwhile in Canada sur Twitter : "Harper & Mulroney gave us deficit after deficit. Trickle down economics is a scam against the middle class. #CdnPoli. Witter / ? Jim Harris sur Twitter : "Canada Now #1 Contributor To Deforestation Globally #climate #environment #eco. Canada Largest Contributor To Deforestation Worldwide: Study. Add another black mark to Canada’s environmental image around the world: The country now leads the planet in the degradation of untouched forests, according to a study from Forest Watch. 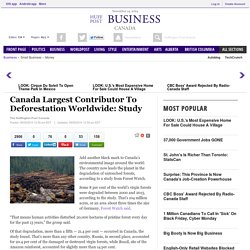 Some 8 per cent of the world’s virgin forests were degraded between 2000 and 2013, according to the study. That’s 104 million acres, or an area about three times the size of Germany, Forest Watch said. Apostles of Growth. “The First Cotton Gin,” Harper’s Weekly, December 18, 1869 The Monied Metropolis New York City and the Consolidation of the American Bourgeoisie, 1850–1896. 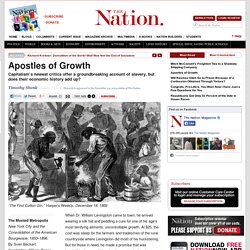 By Sven Beckert. Cambridge. 492 pp. Paper $37. Making Money Coin, Currency, and the Coming of Capitalism. The economy is in a coma. Tax cuts won’t help. More from Scott Clark and Peter DeVries available here We’re roughly a year away from the next federal election, and the recession recovery that forms the bedrock of the Harper government’s political narrative is looking more and more like smoke. 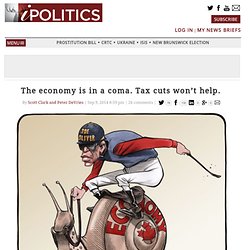 Last Friday, Statistics Canada released its Labour Force Survey for the month of August. It showed the economy lost 11,000 jobs in August, following an unprecedented decline of 112,000 private sector jobs only partly offset by an equally unprecedented increase in self-employment. The numbers are being greeted with some skepticism in certain quarters, given what happened to the last batch. In July, StatsCan released a survey showing that the economy had created only 200 jobs. Great Tool To Learn About New Economy. Prof_Savage : The myth of trickle-down ... TPPImpacts_TheEnvironment. Want to download this page as a PDF? 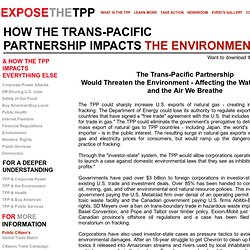 The Trans-Pacific Partnership Would Threaten the Environment - Affecting the Water We Drink and the Air We Breathe The TPP could sharply increase U.S. exports of natural gas - creating incentives for more fracking. The Department of Energy could lose its authority to regulate exports of natural gas to countries that have signed a "free trade" agreement with the U.S. that includes "national treatment for trade in gas. " The TPP could eliminate the government's prerogative to determine whether the mass export of natural gas to TPP countries - including Japan, the world's largest natural gas importer - is in the public interest. 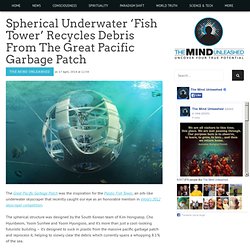 The spherical structure was designed by the South Korean team of Kim Hongseop, Cho Hyunbeom, Yoom Sunhee and Yoom Hyungsoo, and it’s more than just a cool-looking futuristic building – it’s designed to suck in plastic from the massive pacific garbage patch and reprocess it, helping to slowly clear the debris which currently spans a whopping 8.1% of the sea.

The Plastic Fish Tower is an underwater structure that would float and bob on the surface of the ocean, navigating through the GPGP. The patch is made up of mostly of plastic, which gets broken down by the sun and elements into tiny pellets that harm birds, sea mammals and fish. Prof_Savage : Trickle down #economics... How to Destroy an Entire Country. From a recent 188-page report by the World Health Organization come these ghastly and appalling factoids: Suicide rates rose 40 percent in the first six months of 2011 alone.Murder has doubled.9,100 doctors in Greece, roughly one out of every seven, have been laid off. 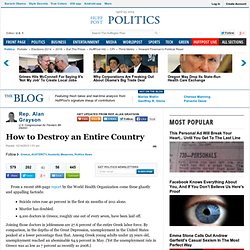 Joining those doctors in joblessness are 27.6 percent of the entire Greek labor force. By comparison, in the depths of the Great Depression, unemployment in the United States peaked at a lower percentage than that. Among Greek young adults under 25 years old, unemployment reached an abominable 64.9 percent in May. (Yet the unemployment rate in Greece was as low as 7 percent as recently as 2008.) How economic growth has become anti-life. Limitless growth is the fantasy of economists, businesses and politicians.

It is seen as a measure of progress. As a result, gross domestic product (GDP), which is supposed to measure the wealth of nations, has emerged as both the most powerful number and dominant concept in our times. However, economic growth hides the poverty it creates through the destruction of nature, which in turn leads to communities lacking the capacity to provide for themselves. The concept of growth was put forward as a measure to mobilise resources during the second world war. 40 Percent Of U.S. Workers Make Less Than What A Full-Time Minimum Wage Worker Made In 1968. Michael SnyderActivist Post Are American workers paid enough? Strengthening the food chain: Farmers and workers unite, find power in numbers.

Bob St. Peter and his wife, Juli Perry, farm four acres in coastal Maine, growing vegetables, herbs, flowers, rabbits, chickens, and sheep to feed their family and their neighbors. They grow food in ways that build rich soil, nurture wildlife, and nourish their community. Broadbent Institute. Brian Lee Crowley’s recent column in the Globe and Mail shows that he's a glass-half-full kinda guy. He says we shouldn't be worried about unemployment because a) it's old-fashioned, b) Boomers had it worse (and now they're getting old) c) we're doing better than the U.S., and d) it's really only young people and immigrants that are unemployed. RE: Fiscal “Crisis” In Context: Two Indicators. I've enjoyed reading the Progressive Economics Forum, they've had many great posts and analysis but a post put out today titled "Fiscal “Crisis” In Context: Two Indicators" has me strongly disagreeing as I find the context presented to be much too narrow to provide proper context at all.

The post looks at two indicators. Federal/Provincial Debt-to-GDP and Government interest costs as a percentage of GDP. We enforced Ottawa’s pot laws. They don’t work. Law enforcement officials, academics and government officials gathered in Ottawa this week to discuss how to keep Canadian communities safe at a time when policing costs are soaring. Canada’s failed marijuana policies must be part of this discussion.