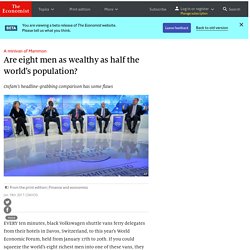 If you could squeeze the world’s eight richest men into one of these vans, they might feel cramped. But they could comfort themselves with an extraordinary statistic: according to Oxfam, a charity, they own as much wealth ($426bn) as half the world’s population combined ($409bn). To make this striking calculation, the charity draws on data from Forbes magazine, which lists the wealth of the billionaires, and Credit Suisse, which estimates the smaller holdings of everyone else, thanks to painstaking work by three scholars of wealth, Anthony Shorrocks, Jim Davies and Rodrigo Lluberas.

Which countries are best at converting economic growth into well-being? Will cutting interest rates increase inequality? Image copyright Reuters The Bank of England might decide to cut interest rates this week. 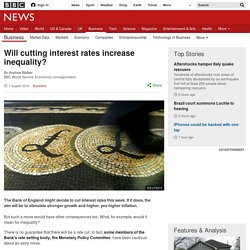 If it does, the aim will be to stimulate stronger growth and higher, yes higher inflation. But such a move would have other consequences too. What, for example, would it mean for inequality? The Prophet Motive. Mississippi Jails Are Losing Inmates, And Local Officials Are 'Devastated' By... Bernie Sanders is right the economy is rigged. He’s dead wrong about why. The economy is rigged. 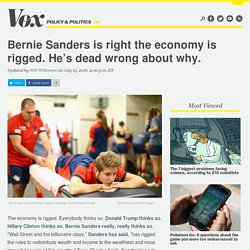 Everybody thinks so. Donald Trump thinks so. Hillary Clinton thinks so. A crystal clear explainer of Rajan’s exit from RBI and what it means to you. By Kaushik Anand Over the last week, there has been a lot written about Dr.Rajan’s departure from the RBI. 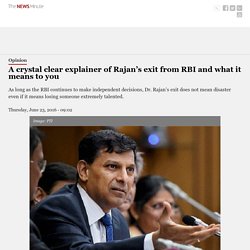 Most of these have either used his pedigree to paint a doomsday scenario or attacked him using his US residency status. In this blogpost, I am not going to indulge in any of these irrelevant facts. The criticism raised and Dr.Rajan’s public responses have however raised some fascinating academic questions. The purpose of this blogpost is to explain arguments from both sides and to let you make your own decision. Seizing the Momentum: ‘But For’ These Foundations, Less Impact in Investing. Baltimore, Md. – There’s a tendency for some hardcore finance types to look down their noses at philanthropic foundations. 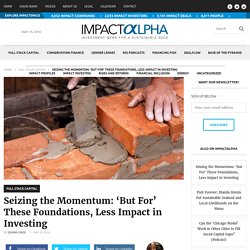 Soft-headed. Concessionary. Anti-business. It may be time for a new view: Pioneering. How to measure prosperity: GDP is a bad gauge of well-being. WHICH would you prefer to be: a medieval monarch or a modern office-worker? 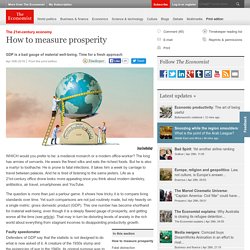 The king has armies of servants. He wears the finest silks and eats the richest foods. But he is also a martyr to toothache. Blended finance: The fad for mixing public, charitable and private money. What blended finance hath wrought MEETING the United Nations’ Sustainable Development Goals will require additional investments of $2.5 trillion a year in things like health care and education for the world’s poorest people, according to UNCTAD, a UN agency. 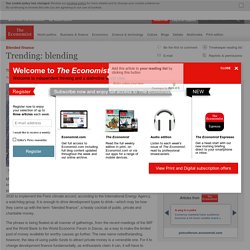 A further $13.5 trillion is needed by 2030 to implement the Paris climate accord, according to the International Energy Agency, a watchdog group. It is enough to drive development types to drink—which may be how they came up with the term “blended finance”, a heady cocktail of public, private and charitable money. Forget 'The Innovators': 'Maintainers' Conference Advances Alternative Histor... We need more stories about the labor that sustains society, a group of scholars say. 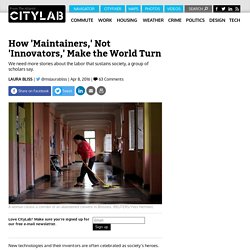 New technologies and their inventors are often celebrated as society’s heroes. Be ashamed, very ashamed. How do you put the lives of 1.25 billion Indians into perspective on the back of economics and various studies? 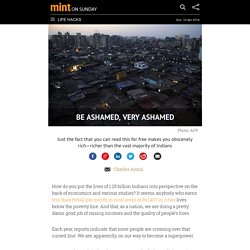 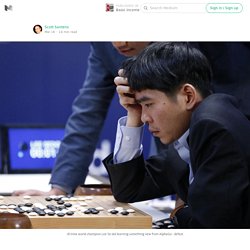 Why Bernie Sanders Is Adopting a Nordic-Style Approach. Aviation in Africa: Africa is ripe for air travel. America's Real Criminal Element: Lead. Illustration: Gérard DuBois When Rudy Giuliani ran for mayor of New York City in 1993, he campaigned on a platform of bringing down crime and making the city safe again. It was a comfortable position for a former federal prosecutor with a tough-guy image, but it was more than mere posturing. How Marlboro Used a Network of Young Smokers to Skirt the Laws Against Tobacco Promotion. The Juvenile Justice (Care and Protection of Children) Act 2015, which amended the Juvenile Justice Act of 2000, was passed in the winter session of the parliament in December 2015, and came into effect on 15 January 2016. The act allows juveniles between the ages of 16 and 18 years, charged with heinous crimes, to be tried as adults. It was passed amidst the public outcry that followed the release of the juvenile accused of the rape of Jyoti Kumar Pandey in 2012, and was widely criticised for being passed in haste.

The act also makes it illegal to serve children any tobacco products, alcohol, narcotic drugs, and psychotropic substances. The Gift of Death. Damage of six years has been reversed in a matter of a year: Ridham Desai. Morgan Stanley’s head of India research says competitive federalism has emerged as the NDA‘s biggest contribution to the nation as states put in place critical reforms to attract investments Singapore: Competitive federalism has emerged as the National Democratic Alliance (NDA) government’s biggest contribution to the nation as state governments put in place critical reforms such as land and labour law changes to attract investments, said Ridham Desai, managing director and head of India research, Morgan Stanley, in a recent interview on the sidelines of a conference organized by the investment bank in Singapore.

Here's What Really Happened at That Company That Set a $70,000 Minimum Wage.