Economics-why do we pay for what we don't have

Theconversation. The Australian government wants to suspend welfare payments to unemployed young people who fail to turn up for mandatory training sessions. 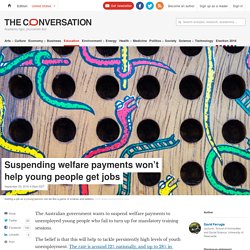 The belief is that this will help to tackle persistently high levels of youth unemployment. The rate is around 12% nationally, and up to 28% in some communities. The proposal includes introducing arbitrary waiting times of around a month before young people can receive unemployment benefits, and having the option to suspend payments for those who don’t turn up for back-to-work training. This policy proposal, however, is unhelpful and out of step with the evidence about the nature of contemporary youth unemployment. And if it’s implemented, it’s likely to aggravate the poverty that young unemployed people already experience, with no benefit to themselves or their communities. Economic problem Youth unemployment is not a problem within young people themselves, but is a structural feature of our economy.

Young people most affected Game of snakes and ladders. Thoughts for the post-2008 world. Hobson's choice. A Hobson's choice is a free choice in which only one thing is offered. 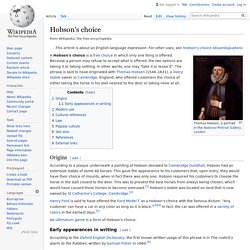 Because a person may refuse to accept what is offered, the two options are taking it or taking nothing. In other words, one may "take it or leave it. " The phrase is said to have originated with Thomas Hobson (1544–1631), a livery stable owner in Cambridge, England, who offered customers the choice of either taking the horse in his stall nearest the door or taking none at all. Origins[edit] According to a plaque underneath a painting of Hobson donated to Cambridge Guildhall, Hobson had an extensive stable of some 40 horses. Henry Ford was also said to have offered the Ford Model T with the famous Hobson's choice: "Any customer can have a car painted any colour that he wants as long as it is black An ultimatum game is a form of Hobson's choice.

Early appearances in writing[edit] If in this Case there be no other (as the Proverb is) then Hobson's choice...which is, chuse whether you will have this or none. Modern use[edit] Differentiable manifold. A nondifferentiable atlas of charts for the globe. 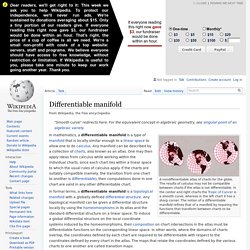 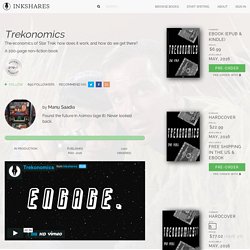 In its half-century of existence — on TV, on the big screen, and in the worldwide community of its fans — Star Trek has become an integral part of our everyday lives. Even casual viewers know the pointed ears, the Vulcan salute, and the meaning of “beam me up, Scotty.” Yet, Star Trek does not owe its enduring popularity and its place in our collective imagination to its aliens or to its technological speculations.

What makes it so unique, and so exciting, is its radical optimism about humanity's future as a society: in other words, utopia. In Star Trek, humanity has reached abundance. This state of economic bliss, however, is not without difficulties. Trekonomics takes readers on a journey through Star Trek's fictional society, its mores and values, and its sources of inspiration in classic sci-fi. Read the Introduction Read Chapter One Read Chapter Eight About me Favorite ST:TOS episode: The Ultimate Computer. Monster of the deep and rainbow opal hits museum. By Jonathan Porter Visitors to South Australia from 25 September will have the chance to go back in time 100 million years to a time when dinosaurs roamed Australia, the southern desert was a huge inland sea populated by huge Mesozoic monsters and some of the world’s most wondrous gemstones began being formed. 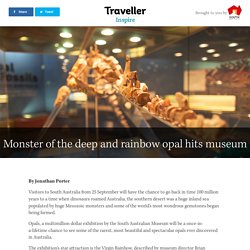 Opals, a multimillion dollar exhibition by the South Australian Museum will be a once-in-a-lifetime chance to see some of the rarest, most beautiful and spectacular opals ever discovered in Australia. The exhibition’s star attraction is the Virgin Rainbow, described by museum director Brian Oldman as ‘the most wondrous and unique opal yet discovered’. Also on display will be an opalised skeleton of one of the aforementioned monsters – a 6.5m plesiosaur – which died as the inland sea dried up. The creature – the marine reptile equivalent of a dinosaur – is named the Addyman Plesiosaur, after its finders. Ancient climate change ‘‘I’ve done a lot of cutting and polishing. Advertisement. Sharing economy.