Yanis Varoufakis full transcript: our battle to save Greece. Greek referendum: how would top economists vote? Greeks go to the polls on Sunday to vote on whether to accept the bailout programme proposed by international lenders that would restart financial aid in exchange for further austerity and economic reform. 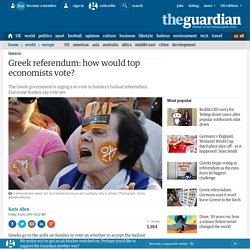 10 surprising economic trends that rule the world. What’s going on in the world today? 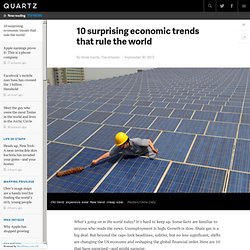 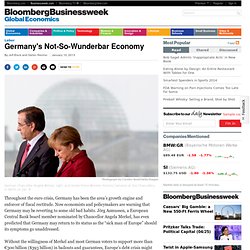 Now economists and policymakers are warning that Germany may be reverting to some old bad habits. Jörg Asmussen, a European Central Bank board member nominated by Chancellor Angela Merkel, has even predicted that Germany may return to its status as the “sick man of Europe” should its symptoms go unaddressed. Without the willingness of Merkel and most German voters to support more than €300 billion ($393 billion) in bailouts and guarantees, Europe’s debt crisis might have led to the breakup of the euro currency bloc. Yet the drive to rescue Europe has distracted Merkel from the situation at home, where labor costs are rising at their fastest pace in a decade.

Fiscal Cliff Could Turn BIg Business Against Small Business. By now, of course, you’ve heard all about the “fiscal cliff.” 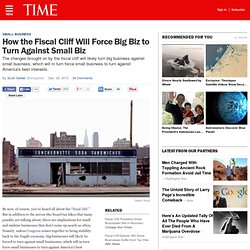 But in addition to the across-the-board tax hikes that many pundits are talking about, there are implications for small and midsize businesses that don’t come up nearly as often. Namely, unless Congress comes together to bring stability back to the fragile economy, big businesses will likely be forced to turn against small businesses, which will in turn force small businesses to turn against America’s best interests. Stabilization Won’t Save Us. Share photos and videos on Twitter. Daily chart: The paramountest leader. Hu was best for China's economy? 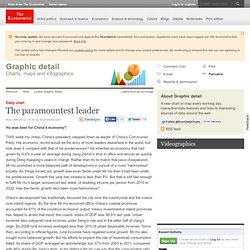 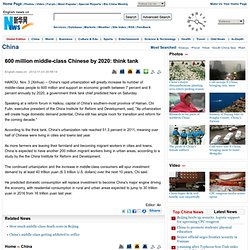 Speaking at a reform forum in Haikou, capital of China's southern-most province of Hainan, Chi Fulin, executive president of the China Institute for Reform and Development, said, "As urbanization will create huge domestic demand potential, China still has ample room for transition and reform for the coming decade. " According to the think tank, China's urbanization rate reached 51.3 percent in 2011, meaning over half of Chinese were living in cities and towns last year. As more farmers are leaving their farmland and becoming migrant workers in cities and towns, China is expected to have another 200 million migrant workers living in urban areas, according to a study by the the China Institute for Reform and Development. 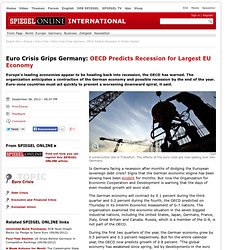 Signs that the German economic engine has been slowing have been evident for months. But now the Organization for Economic Cooperation and Development is warning that the days of even modest growth will soon stall. The German economy will contract by 0.1 percent during the third quarter and 0.2 percent during the fourth, the OECD predicted on Thursday in its Interim Economic Assessment of G-7 nations.

The organization examined the economic situation in the seven biggest industrial nations, including the United States, Japan, Germany, France, Italy, Great Britain and Canada. Bundesbank QE 1975. Bundesbank President Jens Weidmann has been one of the most outspoken critics of European Central Bank President Mario Draghi's plan to buy sovereign bonds, a form of quantitative easing. 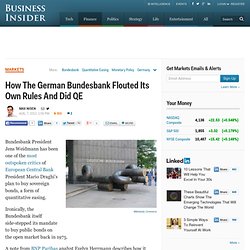 Ironically, the Bundesbank itself side-stepped its mandate to buy public bonds on the open market back in 1975. A note from BNP Paribas analyst Evelyn Herrmann describes how it came to pass. Facing collapsing demand for longer-dated bonds and deteriorating economic growth, the Bundesbank purchased 7.6 billion Deutsche marks of public post, telecom, and sovereign bonds on the secondary market. That was equivalent to about 1 percent of GDP. Monetization of debt was forbidden in the Bundesbank's mandate.

Unemployment: a brief history. My chart below puts today's unemployment data into long-term historical perspective. Using Bank of England data, it shows the unemployment rate since 1855. What stands out here is that a highish rate of joblessness is quite normal. "The Euro’s Latest Reprieve" by Joseph E. Stiglitz. Exit from comment view mode. 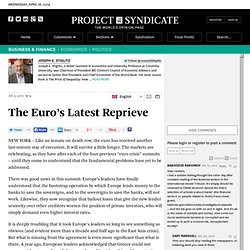 Click to hide this space. La fine dell’euro in 4 mosse. How Greece could leave the eurozone – in five difficult steps. Mass unemployment in Greece, inflation at 50%, a devastating recession and Greeks heading for the borders – that's the apocalyptic scenario being painted by some economists in the increasingly likely event that Greece leaves the eurozone in coming months. 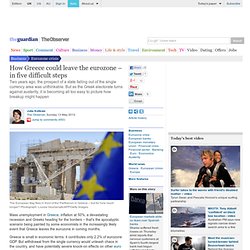 Greece is small in economic terms: it contributes only 2.2% of eurozone GDP. Ex-President Bling-Bling. According to projections. Big Government and the Crisis. European economy guide: Polarised prospects. Europe’s Economic Suicide. Just a few months ago I was feeling some hope about Europe. You may recall that late last fall Europe appeared to be on the verge of financial meltdown; but the European Central Bank, Europe’s counterpart to the Fed, came to the Continent’s rescue.