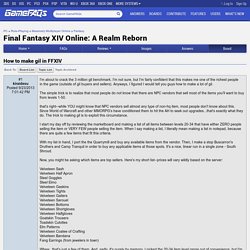 I'm not sure, but I'm fairly confident that this makes me one of the richest people in the game (outside of gil buyers and sellers). Anyways, I figured I would tell you guys how to make a lot of gil. The simple trick is to realize that most people do not know that there are NPC vendors that sell most of the items you'll want to buy from levels 1-50. that's right--while YOU might know that NPC vendors sell almost any type of non-hq item, most people don't know about this.

Since World of Warcraft and other MMORPG's have conditioned them to hit the AH to seek out upgrades...that's exactly what they do. I start my day off by reviewing the marketboard and making a list of all items between levels 20-34 that have either ZERO people selling the item or VERY FEW people selling the item. With my list in hand, I port the the Quarrymill and buy any available items from the vendor. Now, you might be asking which items are top sellers. 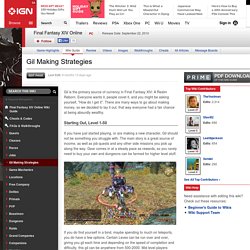 Everyone wants it, people covet it, and you might be asking yourself, "How do I get it". There are many ways to go about making money, so we decided to lay it out, that way everyone had a fair chance at being absurdly wealthy. Starting Out, Level 1-50 If you have just started playing, or are making a new character, Gil should not be something you struggle with. The main story is a great source of income, as well as job quests and any other side missions you pick up along the way. If you do find yourself in a bind, maybe spending to much on teleports, you do have a few options. End Game Farming Once you reach 50, a lot of potential options open up for you to make money, although they might not be obvious right away. Ask around, speak with crafters to get a feel for what everyone is looking for at this time. 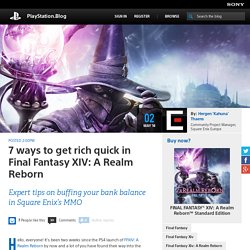 It’s been two weeks since the PS4 launch of FFXIV: A Realm Reborn by now and a lot of you have found their way into the world of Eorzea. You’ve started on your path to become a hero among heroes, and soon you discover that even the citizens of Eorzea have to make a living, and the currency they require for this is called Gil. Equipment needs to be bought and occasionally repaired, buff-food and potions are required, and teleporting is so damn comfortable, yet expensive… Since I can only relate all too well with that, I thought that the best solution would be to present you with the top seven ways to make some good Gil in FFXIV. Please note that these are just rough pointers – every server is different, so you’ll still have to do some research yourselves! 1. Quests are the lifeline of every adventurer that brings his first class up in these harsh environments. 2. NPC to MB Strat. Hot Item List. In FFXIV – whether you’re on a Legacy server or not – gil is often hard to come by, and those who have it aren’t sharing their secrets on how to get it. 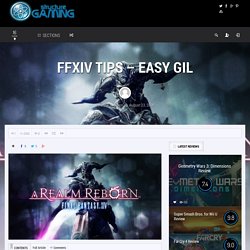 I’ve never been one to want for much in MMOs and currently on Hyperion am sitting on around 8,000,000 gil. Yep – that’s right. 8 million. Actually to be exact – it’s 8.5, but still the point is – that’s a lot. I think it’s time to stop holding the secrets to gil making and share with you guys some very easy ways to make an incredibly large amount of gil in a short amount of time. With patience and dedication you could even start earning up to 400-500k PER DAY. I can’t stress the importance of this enough. Iron ore from an NPC costs 18gil (free if you’re patient enough to gather it yourself)It takes 3 iron ore and one ice shard to make an iron oreSo if we were going to make a stack of HQ ingot it would take us 297 iron ore and 99 ice shards which would equal to 5,346 gil.On Hyperion – for example – HQ Iron Ingot sell for 350gil EACH. 3.