Welcome to the new oil order. He airwaves and Twitter are full of commentary about how Saudi Arabia, the rest of Opec and Russia can balance the market by cutting production and raising prices. 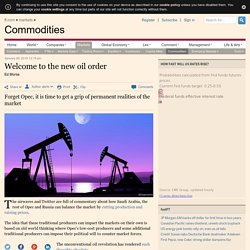 The idea that these traditional producers can impact the markets on their own is based on old world thinking where Opec’s low-cost producers and some additional traditional producers can impose their political will to counter market forces. The unconventional oil revolution has rendered such thoughts obsolete. That is because the new energy world order is one in which the US, whose production was once half that of the other two producer giants, is now on a par with them. And that turns out to make a big difference. In the old world oil order the US did not count — with its declining output it was a taker of prices; with its permanent importer status, it was a bystander to global oil politics and production decision-making. The Game Theory Behind ISIS. At what point does an extremist become a violent extremist? 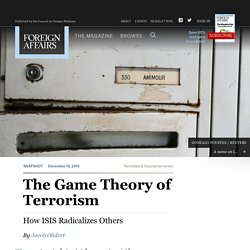 As the world—wakened by the recent terrorist attacks in Baghdad, Beirut, Paris, and now in California and London, too—struggles to defeat the Islamic State (also called ISIS), the answer is more important than ever. For his part, U.S. President Barack Obama has tried to solve the puzzle by introducing a new ingredient to the counterterrorism recipe. In February 2015, he gathered the world’s top experts for a summit on countering violent extremism, a new strategy designed to address the process of radicalization—in particular, ISIS’ apparently unmatched ability to recruit across linguistic, cultural, and geographic boundaries through social media.

Countering violent extremism is different in approach from the one that analysts and policymakers took with al Qaeda. Your subscription includes: Full website and iPad access Magazine issues New! Why the Fed Works. In 1986, Judge Harold Greene rebuffed a challenge from Senator John Melcher of Montana to the constitutionality of the U.S. 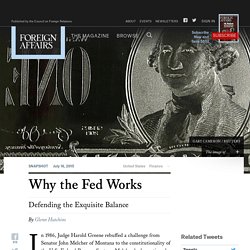 Federal Reserve System. Melcher had questioned the uniquely American approach to central banking, which involves sharing responsibility between (and among) regional Federal Reserve banks and the Federal Reserve Board in Washington, and pointedly objected to the role of private citizens on the boards of the regional Feds. Greene upheld the system and noted that it struck “an exquisitely balanced approach to an extremely difficult problem.” He went on to reflect that “few issues in the history of this nation have been as thoroughly considered and debated as central banking and the regulation of the money supply, and private participation, or even control, have been hallmarks. Well, we are at it again, and I have a bird's-eye view from my perch as a director of the Federal Reserve Bank of New York.

Your subscription includes: Richer World: The predictive powers of fridges - BBC News. The Strange (and Formerly Sexist) Economics of Engagement Rings. Diamonds are forever, but the meaning of the diamond engagement ring has changed dramatically in the last century. 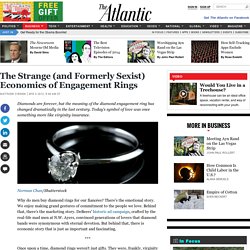 Today's symbol of love was once something more like virginity insurance. Norman Chan/Shutterstock Why do men buy diamond rings for our fiancées? There's the emotional story. We enjoy making grand gestures of commitment to the people we love. Once upon a time, diamond rings weren't just gifts. A now-obsolete law called the "Breach of Promise to Marry" once allowed women to sue men for breaking off an engagement.