Guide des tendances de voyages économiques au plus près de la population et de la nature. Low-tech Magazine. Ingredients. These ingredients are laid out in stages relating to the Transition process, and let's be clear; there is no right way to do Transition. 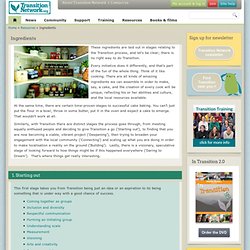 Every initiative does it differently, and that’s part of the fun of the whole thing. Think of it like cooking. There are all kinds of amazing ingredients we can assemble in order to make, say, a cake, and the creation of every cook will be unique, reflecting his or her abilities and culture, and the local resources available. At the same time, there are certain time-proven stages to successful cake baking. Transition Culture. Eco Film Resource - Integralpermanence - Regenerative Agricultural and Permaculture Design-Education-Research-Media. The World Economy.

Food shortages could force world into vegetarianism, warn scientists. Leading water scientists have issued one of the sternest warnings yet about global food supplies, saying that the world's population may have to switch almost completely to a vegetarian diet over the next 40 years to avoid catastrophic shortages. 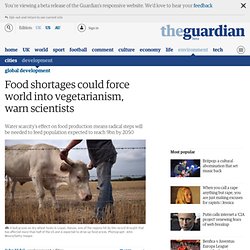 Humans derive about 20% of their protein from animal-based products now, but this may need to drop to just 5% to feed the extra 2 billion people expected to be alive by 2050, according to research by some of the world's leading water scientists. "There will not be enough water available on current croplands to produce food for the expected 9 billion population in 2050 if we follow current trends and changes towards diets common in western nations," the report by Malik Falkenmark and colleagues at the Stockholm International Water Institute (SIWI) said. Dire warnings of water scarcity limiting food production come as Oxfam and the UN prepare for a possible second global food crisis in five years. 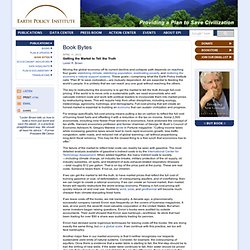 Brown Moving the global economy off its current decline-and-collapse path depends on reaching four goals: stabilizing climate, stabilizing population, eradicating poverty, and restoring the economy’s natural support systems. These goals—comprising what the Earth Policy Institute calls “Plan B” to save civilization—are mutually dependent. The key to restructuring the economy is to get the market to tell the truth through full-cost pricing. For energy specifically, full-cost pricing means putting a tax on carbon to reflect the full cost of burning fossil fuels and offsetting it with a reduction in the tax on income.

The failure of the market to reflect total costs can readily be seen with gasoline. If we can get the market to tell the truth, to have market prices that reflect the full cost of burning gasoline or coal, of deforestation, of overpumping aquifers, and of overfishing, then we can begin to create a rational economy. Hooked on Growth » Population Growth. Most advocates of sustainable population levels believe reducing population is just part of the work needed to bring our civilization into sustainable equilibrium. 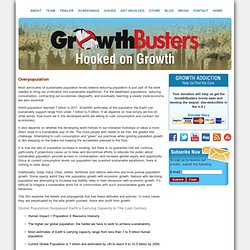 For the wealthiest populations, reducing consumption, contracting our economies (degrowth), and eventually reaching a steady state economy are also essential. World population reached 7 billion in 2011. Scientific estimates of the population the Earth can sustainably support range from under 1 billion to 5 billion. It all depends on how simply we live (in other words, how much we in the developed world are willing to curb consumption and contract our economies).

It also depends on whether the developing world follows in our mistaken footsteps or takes a more direct route to a sustainable way of life. Additionally, today many cities, states, territories and nations welcome and even pursue population growth. This film explores the beliefs and propaganda that fuel these attitudes and policies. Global National Regional Local. Is Population Growth a Ponzi Scheme? by Joseph Chamie. Bernie Madoff’s recent Ponzi scheme has drifted out of the world's headlines. 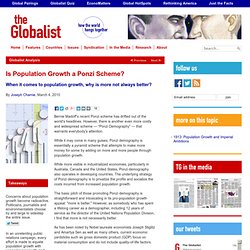 However, there is another even more costly and widespread scheme — “Ponzi Demography” — that warrants everybody's attention. While it may come in many guises, Ponzi demography is essentially a pyramid scheme that attempts to make more money for some by adding on more and more people through population growth. While more visible in industrialized economies, particularly in Australia, Canada and the United States, Ponzi demography also operates in developing countries. Resource Based Economy. A Gallon Of Gas Should Cost $15. The Most IMPORTANT Video You'll Ever See - FULL LECTURE - AlBartlett.org.

Shortly after pleasantries, I said to him, “economic growth cannot continue indefinitely,” just to see where things would go. It was a lively and informative conversation. I was somewhat alarmed by the disconnect between economic theory and physical constraints—not for the first time, but here it was up-close and personal. Though my memory is not keen enough to recount our conversation verbatim, I thought I would at least try to capture the key points and convey the essence of the tennis match—with some entertainment value thrown in. Cast of characters: Physicist, played by me; Economist, played by an established economics professor from a prestigious institution. Professor Emeritus Al Bartlett - Physics at University of Colorado at Boulder - articles on exponential growth, peak oil and population growth, sustainability, renewable resources and the environment. Articles/art_meaning_of_sustainability_2012mar20.pdf. Steady state economy.

A steady state economy is an economy of relatively stable size. 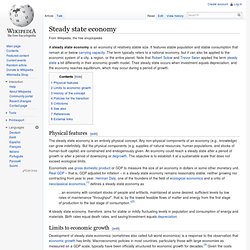 It features stable population and stable consumption that remain at or below carrying capacity. The term typically refers to a national economy, but it can also be applied to the economic system of a city, a region, or the entire planet. Note that Robert Solow and Trevor Swan applied the term steady state a bit differently in their economic growth model.