Frontal lobe pathology is difficult to detect because it may become apparent just under unstructured, stressful life situations. Activation of the left PFC appears to lift the mood, activation of the right causes depression. A lesion to the left abolishes the normal mood-elevating influences and produces depression. A lesion to the right may produce laughter, euphoria, and witzelsucht, a tendency to joke and make puns. Neurobiological Basis of Development Theory (Neurogenesis) Axonal connections between limbic system and PFC which modulate basic drives are established between the age of 10 and 18 months. Infants raised in a chaotic frightening home may be neurobiologically disadvantaged for the aquisition of compex cognitive skills. An adult similar correlate is PTSD. Reasonable to assume, that reactions of caregivers of the first two years are internalized as distinct neural circuits, which may be only incompletely modified later. – weihler

The Triune Brain. The Reptilian Complex The R-complex consists of the brain stem and the cerebellum. 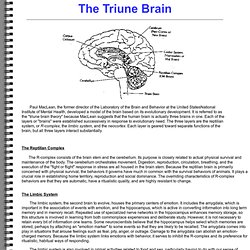 Its purpose is closely related to actual physical survival and maintenance of the body. The cerebellum orchestrates movement. Revenge of the Lizard Brain. There’s a scene in Fear & Loathing in Las Vegas in which the writer, high out of his mind on hallucinogens, watches a roomful of casino patrons transform into giant lizards and lunge at each other in bloody combat.

MacLean’s pet hypothesis doesn’t hold up under scrutiny. Basal ganglia are found in the brains of the earliest jawed fish, which means MacLean’s “reptile complex” originated long before the first tetrapods wriggled onto land. The earliest mammals already had well-formed neocortices, which means at least some “high-level cognitive abilities” predate mammals altogether. Many reptiles exhibit “paleomammalian” behaviors such as familial bonding and child-rearing, and many birds exhibit “neomammalian” skills like tool-making, verbal comprehension and dialect development. In functional terms, a human brain doesn’t behave like a series of separate “complexes,” but as a unified whole. Some neural networks do inhibit others – but the shapes of those networks have nothing to do with “reptilian” or “mammalian” layers. Every habit and hangup, every dread and desire in our minds is dependent on neural pathways that were once laid down by our experiences, genetic and biological makeup. – weihler

Under the veneer of civilization, the scene suggests, we’re all still reptiles, just waiting for the moment to strike. 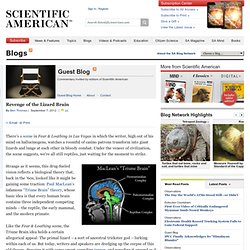 Strange as it seems, this drug-fueled vision reflects a biological theory that, back in the ‘60s, looked like it might be gaining some traction: Paul MacLean’s infamous “Triune Brain” theory, whose basic idea is that every human brain contains three independent competing minds – the reptile, the early mammal, and the modern primate. Like the Fear & Loathing scene, the Triune Brain idea holds a certain allegorical appeal: The primal lizard – a sort of ancestral trickster god – lurking within each of us.

But MacLean wasn’t done. All in all, a truly mind-blowing trip to lay on your friends. Brain Parts Evolve Independently. London 2012 / Olympic Architects London 2012. 10 Key Principles of Agile Marketing. It certainly seems that over the past year agile marketing has taken the marketing world by storm. 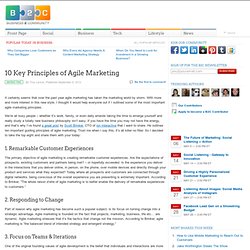 With more and more interest in this new style, I thought it would help everyone out if I outlined some of the most important agile marketing principles. We’re all busy people – whether it’s work, family, or even daily errands taking the time to emerge yourself and really study a totally new business philosophy isn’t easy. If you have the time you may not have the energy, and that’s why I’ve found a great post by Scott Brinker, CTO of ion interactive that I want to share. He outlines ten important guiding principles of agile marketing. Digital Brain Health Market Report: Assess, Enhance Cognition.