Page. CDC building 'police state' registry system to track your vaccination status. How Many People Will Have To Migrate Out Of California When All The Water Disappears? (Before It's News) The drought in California is getting a lot worse. 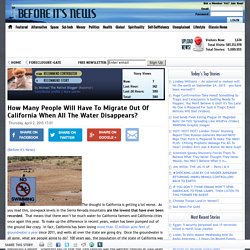 As you read this, snowpack levels in the Sierra Nevada mountains are the lowest that have ever been recorded. That means that there won’t be much water for California farmers and California cities once again this year. To make up the difference in recent years, water has been pumped out of the ground like crazy. In fact, California has been losing more than 12 million acre-feet of groundwater a year since 2011, and wells all over the state are going dry.

I have written quite a few articles about the horrific drought in California, but conditions just continue to get even worse. The water outlook in drought-racked California just got a lot worse: Snowpack levels across the entire Sierra Nevada are now the lowest in recorded history — just 6 percent of the long-term average. California farmers rely on that water. Home Page. A Glut of Texas 'Pro-Vax' Bills Threaten Vaccination Exemptions. Pro-vaccination legislative fever is sweeping the nation faster than the recent measles and whooping cough outbreaks combined. 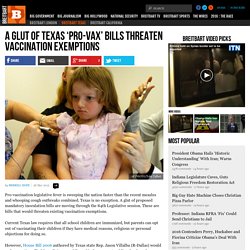 Texas is no exception. A glut of proposed mandatory inoculation bills are moving through the 84th Legislative session. These are bills that would threaten existing vaccination exemptions. Current Texas law requires that all school children are immunized, but parents can opt out of vaccinating their children if they have medical reasons, religious or personal objections for doing so. However, House Bill 2006 authored by Texas state Rep.

Like Texas, current California law allows a parent to opt their child out of school vaccine requirements based on the state’s personal belief exemption. HB 2006 is only one of quite a number of pro-vaccination (or “vax” for short) bills moving through the 84th Legislature. Pro-vax fever has struck more Texas state officials than just the two Republicans. What gets passed, if anything, remains to be seen. Mass killing of dogs shocks city in northern Mexico. MEXICO CITY (AP) — Somebody is systematically poisoning the dogs of Hermosillo, an industrial city in northern Mexico, and not just strays: At least 64 dogs, all with owners, have died of a similar poison since mid-March. 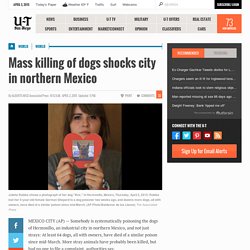 More stray animals have probably been killed, but had no one to file a complaint, authorities say. An organic phosphate compound, possible an insecticide or rat poison, apparently was used in most of the cases, and local media have dubbed the person responsible the "Mataperros," or "The Dog Killer. " Not even dogs kept behind the walls of their owners' homes are safe: Officials say the killer has tossed poison into the gated patios of some homes.

No one knows who the dog killer is, whether the killings involve more than one person or what caused them to turn against dogs. Greece draws up drachma plans, prepares to miss IMF payment. Syriza’s radical-Left government would prefer to confine its dispute to EU creditors but the first payments to come due are owed to the IMF. 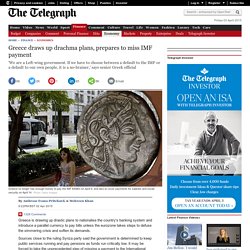 While the party does not wish to trigger a formal IMF default, it increasingly views a slide into pre-default arrears as a necessary escalation in its showdown with Brussels and Frankfurt. The view in Athens is that the EU creditor powers have yet to grasp that the political landscape has changed dramatically since the election of Syriza in January and that they will have to make real concessions if they wish to prevent a disastrous rupture of monetary union, an outcome they have ruled out repeatedly as unthinkable. “They want to put us through the ritual of humiliation and force us into sequestration. They are trying to put us in a position where we either have to default to our own people or sign up to a deal that is politically toxic for us. News from The Associated Press. NEW YORK (AP) -- A drug-resistant strain of a nasty stomach bug made its way into the U.S. and spread, causing more than 200 illnesses since last May, health officials said Thursday. 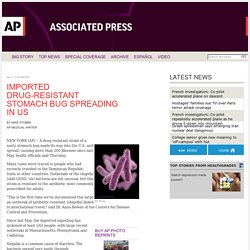 Many cases were traced to people who had recently traveled to the Dominican Republic, India or other countries. Outbreaks of the shigella (shih-GEHL'-uh) bacteria are not unusual, but this strain is resistant to the antibiotic most commonly prescribed for adults. "This is the first time we've documented this large an outbreak of antibiotic-resistant (shigella) linked to international travel," said Dr. Anna Bowen of the Centers for Disease Control and Prevention. Since last May, the imported superbug has sickened at least 243 people, with large recent outbreaks in Massachusetts, Pennsylvania and California. Shigella is a common cause of diarrhea. Blood Moon With Total Lunar Eclipse & Eerie Biblical Message Rising Over U.S. Easter Weekend. (CBS SF) — Get ready to feast your eyes on an extra special and rare total lunar eclipse Saturday morning that has some Christians worried this Easter weekend.

For the third time in less than a year, the moon will dip into Earth’s shadow, turning its bright white globe a deep coppery red in a matter of minutes. READ ALSO: California Faucets Go Dry, Brown Issues Mandatory Cuts The action begins at 3:16 a.m. PST on the morning of April 4 when the edge of the moon first enters the amber core of Earth’s shadow.