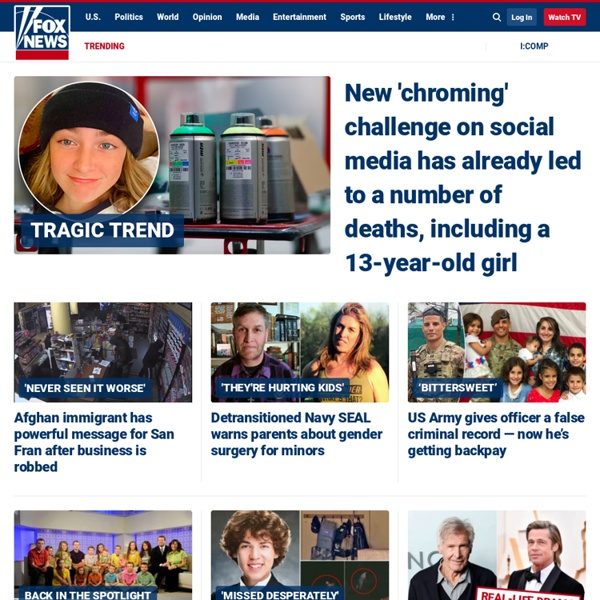 About Me - Sara A. Carter Sara is a thespian who studied with the London Academy of Music and Dramatic Art (LAMDA) and practices foreign accents to embarrass her family in public settings. Sara A. Carter is a national and international award-winning investigative reporter whose stories have ranged from national security, terrorism, immigration and front line coverage of the wars in Afghanistan and Iraq. She is currently the senior national security correspondent for web-based Circa News, working on major projects in conjunction with Sinclair Broadcast Group affiliates across the nation. She was formerly with the Los Angeles News Group, The Washington Times, The Washington Examiner and wrote numerous exclusives for USA Today, US News World Report, and Arutz Sheva in Israel. Her work along the U.S.

Virtual Reference Shelf - Ask a Librarian Abbreviations Back to Top Almanacs & Fast Facts Architecture Hashtagify Popular Hashtags: Global Top 30 Get daily, weekly or monthly updates about the top hashtags for: any language. Just click the button below to choose your frequency. People Maria Miller is still an MP and the poor people of Basingstoke are lumbered with her Selfies Like most people, Sunday People columnist Carol McGiffin had not forgotten the expenses scandals, but had kind of moved on - now it has all come flooding back

Senator Durbin and the Corruption of the English Language Some choice nonsense from Senator Durbin: Sen. Durbin on “chain migration”:“I said to the president, ‘Do you realize how painful that term is to so many people? African-Americans believe that they migrated to America in chains. When you speak about [it], it hurts them personally. And he said, ‘Oh, that’s a good line.’” — MSNBC (@MSNBC) January 12, 2018 Washington Journal OPEN TRANSCRIPTS Frequently Asked Questions Why does C-SPAN take audience calls? The call-in program - and our philosophy of focusing on the caller -- has been a fixture of the C-SPAN networks since the network's founding; it's so fundamental to us, it's incorporated into our company mission statement. Through the call-in program, C-SPAN encourages viewer interactivity by enabling viewers and listeners to talk directly to elected officials, policymakers, and journalists covering the national policy debate.

BBC Trending When the Twitter account of a prominent Yemeni political commentator and high-profile social media user fell silent on 14 August, it did not go unnoticed. Hisham Al-Omeisy is usually a prolific tweeter, known for his updates, in both English and Arabic, about the social and humanitarian crisis in his country. The 38-year-old has around 25,000 followers, among them many international media outlets, journalists and humanitarian workers who turn to him for insights about what's happening within Yemen. So when his account suddenly went quiet, those who have come to rely on him for valuable information, quickly knew something was wrong. Mail Online Anthony Owen, 68, was found unconscious 20 yards from his home, next to his white Honda civic, which was still running Witnesses reported seeing three youths on BMX bikes cycling away from Mr Owen's home on millionaires' row in Hale Village, near Liverpool By James Tozer Published: 19:45 GMT, 20 March 2012 | Updated: 18:02 GMT, 21 March 2012 Head injuries: Anthony Owen died a week after being found unconscious just 20 yards from his home Police are continuing to question three teenagers today over the murder of a surgeon outside his millionaires' row home. Anthony Owen, 68, was found unconscious 20 yards from the property next to his white Honda Civic, which was still running.

CREEPS ON A MISSION: Michael Horowitz is Really Investigating the Investigators Since at least July 2016, the upper echelon of the FBI and the Department of Justice began a stealth operation—with the complicity if not instigation of President Obama—to taint and destroy Candidate Trump with a concocted “Russia collusion” narrative. Michael Horowitz, the Inspector General of the Department of Justice, has been running a little-watched parallel investigation that is already producing results—when he is not manipulated or overborn by Robert Mueller. His name is not familiar to most Americans, but Mr. Can you tell the REAL LIES from the FAKE LIES? 2 real 4 false Most of us lie and get lied to every single day. We say we're fine when we're actually having a bad day. We lie to protect the feelings of others, to get out of trouble and to get what we want. Our newspapers lie, our politicians lie, our parents lie.

'Common Sense Coalition' sets centrist Senate tone Senators in the 25-member Common Sense Coalition on Monday said their work in developing a deal to help end the government shutdown shows the road to getting big-ticket items passed in the future needs to run through the middle of both parties, rather than the extremes. Though senators in the bipartisan group cautioned that the final deal to fund the government through Feb. 8 was ultimately brokered by their respective leaders, Majority Leader Mitch McConnell and Minority Leader Charles E. Schumer, the coalition’s input was critical in helping break the stalemate. Mr. Schumer said he was “incredibly grateful” to the senators for their work and that the coalition managed to make up for President Trump’s “glaring absence” in the process. “I believe that this group has the potential to return the Senate to the kind of place it should be on the issue of immigration: a place for bipartisanship, a place for action, a place for achievement,” Mr.

CNN.com - Transcripts Breaking News Senate Minority Leader Harry Reid says that FBI Director James Comey swayed election. Home+ Mueller’s Fruit of the Poisonous Tree Evidence of Robert Mueller’s hopelessly compromised investigation continues to accumulate. Now we learn that five months of texts between two members of his team plotting Trump’s demise have disappeared, a time period that covers many of the crucial moments of the probe. Imagine the rich harvest of texts Peter Strzok and his mistress Lisa Page must have exchanged over the Flynn entrapment. Those texts have vanished, according to the FBI and Justice Department.

The IRS never loses. They lurk in the shadows watching, waiting to strike at your most vulnerable moment. by bowshere May 27

I read fox only occasionally. Generally I goto the BBC, AJE, and Google News first and I like to try and get a wider version of events. by gsears841 Jun 23