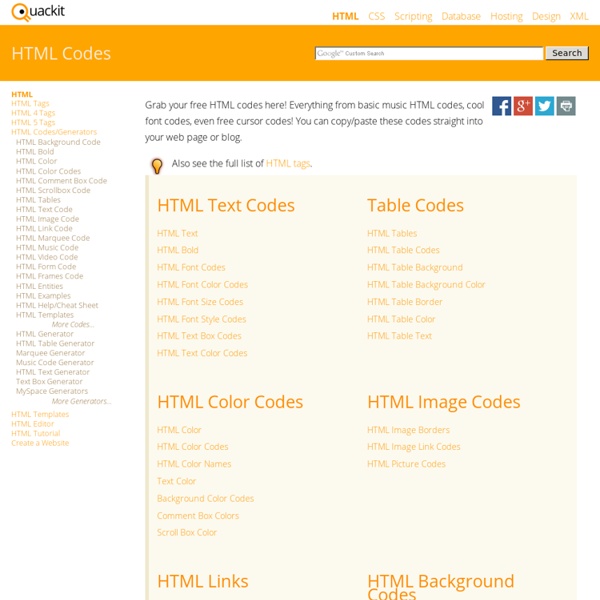 HTML Tags HTML tags (otherwise known as "HTML elements"), and their respective attributes are used to create HTML documents so that you can view them in browsers and other user agents. Note that not all browsers/user agents support all HTML tags and their attributes, so you should try to test your pages in as many browsers as you can. Complete list of HTML tags Below is a complete list of HTML tags from the HTML 4.01 specification. The HTML tags are listed alphabetically to help you quickly find the tag you're looking for (or to find out whether it exists or not!). Also see the HTML 5 version of HTML tags Enjoy this page? Link to this page (copy/paste into your own website or blog): Link to Quackit using one of these banner ads. Thanks for supporting Quackit!

New Jerusalem Bible - Bible New Jerusalem Bible The New Jerusalem Bible (NJB) is a Catholic translation of the Bible published in 1985. The New Jerusalem Bible (NJB) has become the most widely used Roman Catholic Bible outside of the United States. Like its predecessor, the Jerusalem Bible, the New Jerusalem Bible (NJB) version is translated "directly from the Hebrew, Greek or Aramaic." Source: The Very Reverend Dom (Joseph) Henry Wansbrough, OSB, MA (Oxon), STL (Fribourg), LSS (Rome), a monk of Ampleforth Abbey and a biblical scholar. Old Testament New Testament Design and Code Your First Website in Easy to Understand Steps In this tutorial, we're going to design and code our first website in simple, easy steps. This tutorial was written for the beginner with the hope that it will give you the tools to write your own standards-compliant websites! If you're looking for a quick way to get started, look through our collection of HTML Templates for a professional, responsive option that is ready to customize to your next project. Otherwise, it's a brand new week; maybe it's time to learn a new skill! We're going to design and code this very simple website. Spectacular design, it's not, but it'll be very effective for teaching basic coding techniques. This tutorial was written assuming that you've never coded a website before, or have only done it a few times. Photoshop or a similar image editorA code editor (more on that later)Basic understanding of how html works, basic syntax and tags. Open up a shiny, new Photoshop document, say, 1000px by 1200px. Now for the text: big and bold. h2 Header: h3 Header: Paragraph:

Instant Sprite - Generate CSS Sprites Instantly HTML5 This specification defines the 5th major version, second minor revision of the core language of the World Wide Web: the Hypertext Markup Language (HTML). In this version, new features continue to be introduced to help Web application authors, new elements continue to be introduced based on research into prevailing authoring practices, and special attention continues to be given to defining clear conformance criteria for user agents in an effort to improve interoperability. This section describes the status of this document at the time of its publication. Other documents may supersede this document. This document was published by the Web Platform Working Group as a Editors Draft. Publication as a Editors Draft does not imply endorsement by the W3C Membership. This document was produced by a group operating under the 5 February 2004 W3C Patent Policy.

Autumn Colors | netodd.com digg Autumn is that season where everything seems to be more laid back – leaves fall, the weather can be a bit chilly, and the colors everywhere are just shades of brown, burnt orange or gold. Unlike winter, where everything seems to be colored white because everything is covered with snow, how does autumn color come about? There are three pigments that are involved in autumn colors – chlorophyll, carotenoids, and anthocyanins. How they become active is an important part with how autumn colors come about. Chlorophyll is the pigment responsible for the green color of leaves. Autumn will always continue to inspire art with the richness of the colors that you can see during this season. Share and Enjoy

Designers Know Your Code: Web Design Tutorials Oct 03 2011 As almost any web designer worth their salt, and a large percentage of web developers will tell you, to be fully considered a web designer you have to have some background in code. Not to the depth that full on developers must, but it really is unfair to the rest of those working on a website with us if we do not have some knowledge in a handful of key areas. In this post we have gathered a handful of useful tutorials from these various areas of code that designers should have their hands in. CSS Tutorials 30 CSS Best Practices for Beginners – CSS is a language that is used by nearly every developer at some point. 6 Ways To Improve Your Web Typography – Typography on the web is anything but simple, and for many, it is a troubling mystery. 3 Easy and Fast CSS Techniques for Faux Image Cropping – This article is a summary of a 3 fast and easy CSS techniques you can use to display only a portion of an image in your content. CSS3 Tutorials HTML5 Tutorials Javascript Tutorials (rb)

Books: Best Selling New Release books Nothing is fair in love and war…especially in Luna’s turbulent life! As Luna’s shocking past is unveiled, things are about to reach a boiling point at school.... The visionary writer Iain Sinclair turns his sights to the Beat Generation in America in his most epic journey yet “How best to describe Iain Sinclair?”... Since Jimm Juree moved, under duress, with her family to a rural village on the coast of Southern Thailand, she misses the bright lights of Chiang Mai. The Billionaire’s Club: a fabulously sexy contemporary series about some of the world’s wealthiest, most powerful men and the women they claim…and... Dominique Monaghan just wanted to get even with her two-timing, married boyfriend, a washed-up boxer stuck in a toxic marriage to a dangerously spoiled... The New York Times bestselling SF manga series continues The exclusive e-serial continues! Devils and Realist is an all-new supernatural manga series that pits a young, suave nobleman against Hell’s princely demons. Great Hair

Design and Code a Slick Website from Scratch – Part I With the Internet becoming more and more popular every minute, a great-looking website is somewhat of a must-have. You could obviously pay a web designer to design one for you, but wouldn't it be really cool to design and code it yourself? "Difficult", you may say; but it's actually not too hard once you've learned how to do it! In this first part, you'll learn how to design a neat-looking website that you can easily adapt to your business. Step One – What We Will Be Making I suppose you might want to know what our design will look like once finished. The reasons this design will be fairly appealing to your readers are: Usability, user-friendliness.The “living” atmosphere, with the picture and shadows.Content-centered, the layout doesn’t take the reader’s attention from the useful informationThe blog and twitter integration creates a closer relationship between the reader and your company. Step Two – Structure I’ve chose the following structure for this design: Step Three – Getting Started

Generador de Sprite CSS | Project Fondue You Don't Have A Disability; You Have A Superpower | KidGlue By Akela Talamasca on September 15th, 2009 In my Internet meanderings, I come across a wide variety of content. Some of it is good, some of it is bad, some of it is brilliant. It is to this latter category that I place the following post, called “ It’s not a disability. Emme Rogers is dyslexic , a condition that some might call disabling. Rogers has discovered one of the secrets of the universe: if you see yourself one way, then you are that way. As parents, we have more control over how our children think of themselves than we sometimes realize. Follow Emme’s parents’ example, and insist to your child that they are as capable as any other kid out there — and if you are, in fact, dealing with developmental issues, you can teach your child something valuable by letting them know that being different is actually a gift.