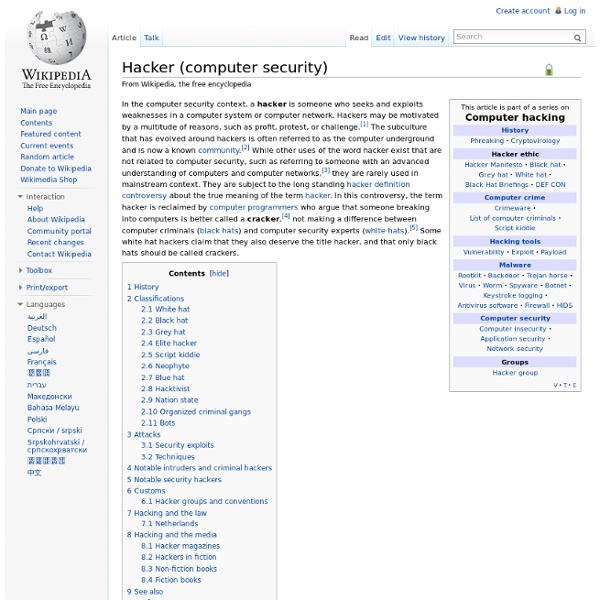 Bruce Sterling traces part of the roots of the computer underground to the Yippies, a 1960s counterculture movement which published the Technological Assistance Program (TAP) newsletter.[citation needed] TAP was a phone phreaking newsletter that taught techniques for unauthorized exploration of the phone network. Many people from the phreaking community are also active in the hacking community even today, and vice versa. Several subgroups of the computer underground with different attitudes use different terms to demarcate themselves from each other, or try to exclude some specific group with which they do not agree. According to Ralph D. A grey hat hacker is a combination of a black hat and a white hat hacker. A neophyte, "n00b", or "newbie" is someone who is new to hacking or phreaking and has almost no knowledge or experience of the workings of technology and hacking.[10] Intelligence agencies and cyberwarfare operatives of nation states.[17] Vulnerability scanner Password cracking

2600: The Hacker Quarterly Data mining Data mining is the process of discovering patterns in large data sets involving methods at the intersection of machine learning, statistics, and database systems.[1] Data mining is an interdisciplinary subfield of computer science and statistics with an overall goal to extract information (with intelligent methods) from a data set and transform the information into a comprehensible structure for further use.[1][2][3][4] Data mining is the analysis step of the "knowledge discovery in databases" process or KDD.[5] Aside from the raw analysis step, it also involves database and data management aspects, data pre-processing, model and inference considerations, interestingness metrics, complexity considerations, post-processing of discovered structures, visualization, and online updating.[1] Etymology[edit] In the 1960s, statisticians and economists used terms like data fishing or data dredging to refer to what they considered the bad practice of analyzing data without an a-priori hypothesis.

How To Understand Programs for Password Hacking | How To Do Things Password hacking may sound like an ominous thing to most people, who also believe that someone who may know how to do it can't possibly be up to any good. On the contrary, it can actually be most useful for you or potential clients. You wouldn't know when you would need to hack your own email account in case you forgot your password, or an important client needs your help to crack a program password. Dictionary attacks. Password hacking is still a skill that not everyone can do. Research and development Cycle of research and development The research and development (R&D, also called research and technical development or research and technological development, RTD in Europe) is a specific group of activities within a business. The activities that are classified as R&D differ from company to company, but there are two primary models. In one model, the primary function of an R&D group is to develop new products; in the other model, the primary function of an R&D group is to discover and create new knowledge about scientific and technological topics for the purpose of uncovering and enabling development of valuable new products, processes, and services. Under both models, R&D differs from the vast majority of a company's activities which are intended to yield nearly immediate profit or immediate improvements in operations and involve little uncertainty as to the return on investment (ROI). Background[edit] Business[edit] Present-day R&D is a core part of the modern business world.

Welcome to freshmeat.net | freshmeat.net Penetration test Method of evaluating computer and network security by simulating a cyber attack A penetration test, colloquially known as a pen test or ethical hacking, is an authorized simulated cyberattack on a computer system, performed to evaluate the security of the system;[1][2] this is not to be confused with a vulnerability assessment.[3] The test is performed to identify weaknesses (also referred to as vulnerabilities), including the potential for unauthorized parties to gain access to the system's features and data,[4][5] as well as strengths,[6] enabling a full risk assessment to be completed. Security issues that the penetration test uncovers should be reported to the system owner.[9] Penetration test reports may also assess potential impacts to the organization and suggest countermeasures to reduce the risk.[9] Penetration tests are a component of a full security audit. Several standard frameworks and methodologies exist for conducting penetration tests. History[edit] Tools[edit] Payload[edit]

Tutorial Start Hacking - Hackers Dot NL Throughout the site, you may see the term HDNL. This is an acronym for our community coming from: Hackers Dot NL. You are probably very excited to start hacking, and you should know that being a hacker is an adrenaline rush as well as fullfilling. To begin hacking, you need to learn a programming language such as(c/c++/perl/php/java) and study certain operating systems such as(windows NT,2000/Linux/Unix). Ask other hackers what they use and why, then choose one and stick to it. All 3 types of hackers may have detailed knowledge of system security and programming, but how they use their knowledge is what makes them very different. 1. 2. 3. See the difference? After learning an advanced operating system, and/or programming, you will be able to understand how exploits work and how systems are compromised. HDNL can help you to advance your computer skills by providing a place to ask questions, read articles, and see how exploits work. Here is an example of a question you shouldn’t ask: 1.

Kali Linux Kali Linux is a Debian-derived Linux distribution designed for digital forensics and penetration testing. It is maintained and funded by Offensive Security Ltd. It was developed by Mati Aharoni and Devon Kearns of Offensive Security through the rewrite of BackTrack, their previous forensics Linux distribution.[1] Kali Linux is distributed in 32- and 64-bit images for use on hosts based on the x86 instruction set, and as an image for the ARM architecture for use on the Raspberry Pi computer and on Samsung's ARM Chromebook.[3] References[edit] External links[edit]

Networking Fundamentals Networking Fundamentals In order to get the most of The TCP/IP Guide, a certain level of knowledge regarding the basics of networking is very helpful. Unlike many other resources, however, I did not want to start with the assumption that my reader knew what networking was all about. After all, that's why you are reading this Guide! So, I decided to include this section, which provides an overview of some of the basic issues related to networking. In this section I have provided several subsections that introduce networking and talk about some of its most important fundamental concepts. Home - Table Of Contents - Contact Us United Brotherhood of Carpenters and Joiners of America The United Brotherhood of Carpenters and Joiners of America often simply, the United Brotherhood of Carpenters (UBC) [1] was formed by Peter J. McGuire and Gustav Luebkert. In 1881. It has become one of the largest trade unions in the United States, and through chapters, and locals, there is international cooperation that poises the brotherhood for a global role. For example the North American Chapter has over 520,000 members throughout the continent. [2] Early years[edit] The union was created in April 1881, by Peter J. While Peter J. The union also struck to obtain the eight hour day, calling a strike of its affiliates for May 1, 1886. Even so, the strike gave the Brotherhood added visibility that led to increased membership. The Brotherhood admitted both black and white carpenters on an equal footing when it was first formed; one of the union's vice-presidents in its early years was L.E. Expansion and conflict[edit] Depression and change[edit] Challenge from non-union contractors[edit]

Crack Windows Passwords Have you ever tried to log into a Windows computer for a few minutes and you finally realize that you forgot the password? There’s a way to crack the password and it doesn’t involve reformatting and reinstalling Windows. The solution is called @stake LC4 (formerly L0phtCrack), however since Symantec stopped development of L0phtcrack, I’m going to let you in on a program called LC5. Just like L0phtCrack, LC5 attacks your Windows machine with a combination of dictionary and brute force attacks. LC5 can crack almost all common passwords in seconds. The main purpose of the LCP program is user account passwords auditing and recovery in Windows NT/2000/XP. I haven’t tested it against Windows Vista yet, so I’m not sure if it will work. How it works: Windows NT, 2000 and XP passwords are stored as encrypted hashes. Eventually the correct password will be sent and then displayed to the screen. Good intentions: System administrators can find weak passwords within minutes. Bad intentions: