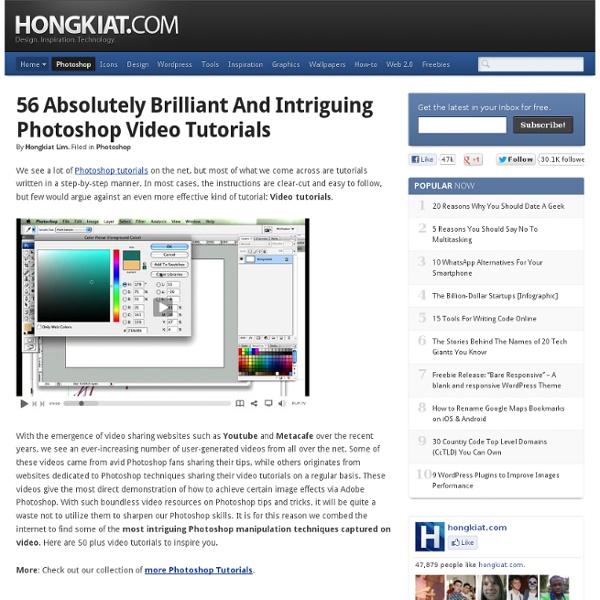 We see a lot of Photoshop tutorials on the net, but most of what we come across are tutorials written in a step-by-step manner. In most cases, the instructions are clear-cut and easy to follow, but few would argue against an even more effective kind of tutorial: Video tutorials. With the emergence of video sharing websites such as Youtube and Metacafe over the recent years, we see an ever-increasing number of user-generated videos from all over the net. Some of these videos came from avid Photoshop fans sharing their tips, while others originates from websites dedicated to Photoshop techniques sharing their video tutorials on a regular basis. More: Check out our collection of more Photoshop Tutorials. 1. How to Digitally Illustrate a Camera with Light Streaks Create a digital illustration of a digital camera using light streaks. High Flying Snowboard IllustrationUsing wavy lines that suggest motion and paint splatters for snow to illustrate high flying snowboard. 2. Got a Light? 3. 4. Related:  Photoshop • Photoshop Tools & Training

9 Great blogs that regularly publish Photoshop tutorials | Free Design Resources By Jobey Buya - Thursday, June 19, 2014 - No Comments Its always great to see incredible Photoshop tutorials and learn something new everytime while following one, Here's 9 great Blogs that makes regularly cool tutorials with valuable Photoshop tips . Share This: Like1Tweet0+2Pin it0 I'm Jobey. an alien who decided to go as a human in EARTH. Making Selections With The Pen Tool In Photoshop Written by Steve Patterson. When it comes to making selections in Photoshop, there's really two types of people - those who know how to use the Pen Tool, and those who struggle. Most people put off learning how to use the Pen Tool for as long as possible, while others never get around to learning it, believing it's just too confusing, too complicated, and just plain unnatural. Ultimately, their work in Photoshop suffers for it, since they're stuck relying on the Lasso Tool for just about everything they can't select with the Rectangular or Elliptical Marquee Tools. Now, when I say "easy", I don't mean you're going to read this tutorial and be instantly transformed into a Pen Master. One of the great things about the Pen Tool is that it's not something that's exclusive to Photoshop. Where Do I Find The Pen Tool? Before we start talking about what the Pen Tool is or how to use it, we should look at where to find it in Photoshop first. Photoshop's Pen Tool Why Is It Called The "Pen" Tool?

25 Best Photoshop Video Tutorials Photoshop’s all about the visuals, so it’s no surprise that it makes for some good videos. You can see step-by-step how buttons, collages or even paintings are created. Instead of reading through books describing what needs to be selected, activated and clicked, you can simply imitate mouse clicks knowing exactly that you are actually doing the right thing. We’ve searched through many of video-sites, forums, articles, blogs, portfolios and communities. And we selected 25 Best Photoshop Video Tutorials which you can use as a starting point to improve your skills. Enjoy! 1. What would happen if you mix Matrix with Zombieland? 2. Create an Unicorn out of smoke using Photoshop CS5′s New feature – Puppet Warp, and add dazzling effects to finish! 3. Create a spectacular rippling exploding underwater effect and blending a sexy girl into the water with just a few simple steps! 4. Create a highly stylized and sexy artwork by following a few simple steps! 5. 6. 7. 8. 10. 11. 12. 13. 13. 14. 15.

High Speed Motion Trail Effect Written by Steve Patterson. In this Photo Effects tutorial, we’ll learn how to add a sense of speed to an object using an easy to create motion blur effect! This "speed trail" effect is very popular in sports photography since it’s a great way to add motion, direction and excitement to an image, creating the illusion that an athlete, for example, is blazing past the competition at super human speed. Of course, this effect works just as well with a photo of your kids running in the backyard, or people dancing at a party, or any image where the subject should appear to be moving. Here’s the image I’ll be using: The original image. Here’s how the image will look after giving the racecar a high speed motion trail: The final “motion trail” effect. Let’s get started! Step 1: Select The Object You Want To Apply The Motion Blur To In many of our photo effects tutorials, the first step is to protect our original image from harm by creating and then working on a duplicate of the Background layer.

Some Really Useful Resources for Making You a Master at the Art of Split Tone Photography The following two tabs change content below. I'm Rob, the editor of Light Stalking. I try to keep this ship on course. Split tone photography is a technique that has allowed photographers to produce some of the most amazing shots you will ever see. What is Split Tone Photography? Split toning uses more than one colour to tone an image. Backgrounder: In traditional print photography, toning was a way to change the basic colour of black and white photographs (traditional toning still creates a monochromatic image). Experimentation with traditional forms of toning such as sepia eventually lead to several ways to “split tone” a photograph. When is It Best to Use Split Toning? In the early days, split toning simply afforded photographers an extra avenue to pursue in their art form. Today many photographers still enjoy the images that can be produced by emulating split toning in post-production software such as Photoshop and Lightroom. How Do I Make Split Tone Photographs?

22 Professional Photoshop Image Enhancing Tutorials Adobe Photoshop is the premier tool for digital artists when it comes to professionally enhancing images. Whether you’re a beginner just learning the ropes or an advanced user looking for unique techniques to add to your Photoshop arsenal, you’ll find some tutorials here that you’ll surely want to bookmark. In this article, you’ll discover plenty of tutorials that deal with enhancing images, adding unique and impressive effects, and recreating digital replications of popular traditional photography techniques. 1. Cross Processing You can learn how to apply the Cross Processing film-developing technique digitally to your images by reading through this quick and educational tutorial that leverages the powers of the Curves tool in Photoshop. 2. Take your ordinary digital photos and simulate the Lomo Photography effect (also known as Lomography) that will apply a dreamy and surreal effect onto your images in this tutorial that uses a Levels Adjustment layer among other Photoshop techniques. 3.