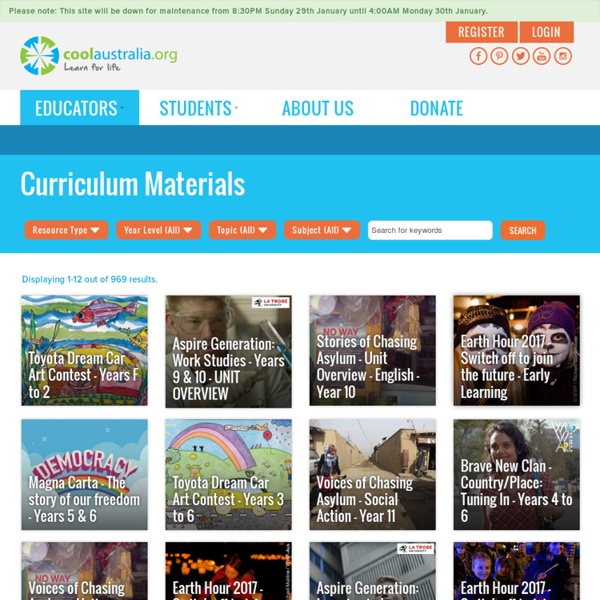 Walking the Amazon On 9th August 2010, Ed Stafford became the first man to walk the length of the Amazon River in South America from the source to the sea. He walked for 860 days. No-one had ever done what he attempted. “Truly extraordinary… in the top league of expeditions past and present.” – Sir Ranulph Fiennes Ed filmed and blogged his deadly journey and engaged followers all over the world for two and a half years. His epic adventure made headline news, featuring in over 900 articles and on every major news channel in the UK and United States.

Worawa College empowering young Aboriginal women with skills and confidence Sometimes the journey begins with a dusty bus trip in the middle of the night. It means leaving behind literally everything familiar. At 12 years old, the youngster might have been only sporadically in the education system. Her family might be semi-nomadic, moving from place to place for ceremonial purposes. Other times she's used to living with as many as 17 people to a house. English might be her second — or third, or fourth — language. 7 Creative Student Design Projects to Try with Canva There’s plenty of compelling evidence supporting the notion that visual-based learning is tied to better retention and recollection of new information as well as measurable success for students in the classroom. A study by 3M Corporation yielded astounding results indicating that 90% of information transmitted to the brain is visual, and visuals are processed 60,000 times faster in the brain than text. Visual and project-oriented teaching strategies are becoming the norm and it’s through these methodologies that a more holistic learning environment has been created and widely embraced. The rapid growth of edtech has resulted in a slew of amazing apps, but one that has taken hold for educators everywhere is Canva. This Web-based graphic design platform has found its way into classrooms as a result of its intuitive and uncomplicated UI, making it the ideal tool for educators to introduce and explore visual literacy in their classrooms. 7 Canva Student Design Project Ideas

About the project In 2003, after The Earth seen from the Sky, Yann Arthus-Bertrand, with Sybille d’Orgeval and Baptiste Rouget-Luchaire, launched the 7 billion Others project. 6,000 interviews were filmed in 84 countries by about twenty directors who went in search of the Others. From a Brazilian fisherman to a Chinese shopkeeper, from a German performer to an Afghan farmer, all answered the same questions about their fears, dreams, ordeals, hopes: What have you learnt from your parents? What do you want to pass on to your children? What difficult circumstances have you been through? What does love mean to you? Forty-five questions that help us to find out what separates and what unites us.

The art and science behind hand-drawn weather maps at the Bureau of Meteorology Posted Sitting in the middle of Melbourne's Bureau of Meteorology office, among a sea of screens, is an easel, paper and coloured pencils. Meteorologists sit at this easel each day to plot the latest troughs and fronts onto a weather map. Despite having around-the-clock satellite images, the hand-drawn map is still the most accurate way to conceptualise weather in specific local areas.

Document Analysis Worksheets Español Document analysis is the first step in working with primary sources. Teach your students to think through primary source documents for contextual understanding and to extract information to make informed judgments. National Geographic Explorer Magazine Discover how and why flowers "call" to bats. Photographs by: Merlin D. Tuttle/Science Source (bat); Rhoberazzi/iStock (power station); Mark Garlick/Science Source (spinosaurus); Jim and Jamie Dutcher/National Geographic Creative (wolf). What the 'typical' Australian worker doesn't tell us about modern work Posted The "typical" Australian works full-time and has been in the same job for three to five years, Australian Bureau of Statistics data shows. But there's a lot going on in the modern workforce that's not captured in such a simple portrait — including the rise of part-time work.

ed.ted At the heart of human communication is the question of how we create meaning. A basic consideration of this process asks what message is being communicated to whom. The transactional model helps us to visualize the many moving parts that comprise human interaction. This model demonstrates that communication is an ongoing process. We co-construct meaning together as we use feedback to exchange ideas. Global Learning This past year, students from around the world came together to collaborate on world issues affecting their communities, taking the concept of global learning and turning it into a reality. In GlobalCOlab (GCL), Students teaching students from around the world, has connected students and educators from different cultures and religions from around the world to cross-cut disciplines, curricula, and traditional subjects to empower participants through student-led and student-created topics. These topics are based around global issues affecting each student’s community. GCL educators will discuss the need for an educational paradigm shift towards a global classroom in a one hour panel format. Additional Supporting Materials

Federal budget 2017: Don't bet on the rosy wages forecast - Federal Budget 2017 - ABC News Are you all set for the wages boom? Looking forward to your annual pay rise doubling or thereabouts and your overall package rising by even more? Woohoo! Happy days, if it's true. The rosy forecast comes from no less reliable a source than those esteemed economic boffins in the Treasury Department. It's there in black and white in the Commonwealth budget. What your child can learn from writing a letter to Santa Opinion By Misty Adoniou Updated I have a drawer full of letters to Santa. Each year my three children would write up their Christmas wish lists and I would squirrel them away.

How classrooms look around the world — in 15 amazing photographs To mark last month’s World Teachers’ Day (sponsored by UNESCO , the United Nations Educational, Scientific and Cultural Organization), photographers from Reuters took pictures around the world of educators with their students in a telling exhibit of the very different circumstances under which children attend school. Here are 15 pictures taken by Reuters photographers, revealing the spectrum of “classrooms” — from those with literally no resources to those well-stocked and housed. Teacher Mahajera Armani and her class of girls pose for a picture at their study open area, founded by Bangladesh Rural Advancement Committee (BRAC), outside Jalalabad city, Afghanistan September 19, 2015. 'This is s**t, I don’t want to be here': Your stories about quitting jobs you hate - Hack - triple j After a glorious 4 day long weekend, the idea of schlepping it back to work might have felt like hell. Maybe it's so bad that the only thing giving you life is fantasising about elaborate ways of quitting (but then not doing that...because….money.) But what if your job really does suck, and you’re not just having a whinge like the rest of us?