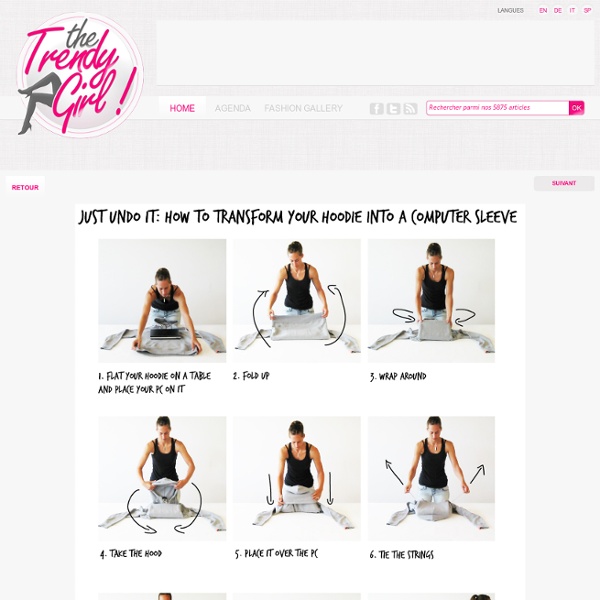 Father's Day Crafts Countdown: Comic Wallet Because you still have time to knock out a few Father's Day crafts before Sunday... Levi Brown, ReadyMade Every father has a secret place in his heart for Wonder Woman. But, you're not limited to the awesome heroine if you decide to undertake this easy idea for making a wallet from a comic book. How to make wrapped leather bracelets « Rings and Things Let me begin by stating the obvious – this style of wrapped leather bracelet is EVERYWHERE this season. Everywhere! Even my athletic clothing catalogs – which only have maybe three pieces of jewelry – are featuring this style. Why? Because it is casual yet chic and infinitely customizable! The catalog (which shall remain nameless) priced each bracelet at $120.

Paper Flower Key Holder / Mark Montano Difficulty Rating: Beginner Tags If you need a quick 'just because' gift for someone, this is it! It’s simple to make, couldn’t be less expensive and we can all use one. Little Red Infinity Dress Tutorial *Tutorial made by Melissa @ Sew Like My Mom for her win during the Red Week challenge.* I made this little dress in about 3 hours and for under $20! I used some soft polyester knit I found at Hancock Fabrics for $4.99/yard. I got 5 yards, and with my 40% off 1 cut of fabric coupon, my total came to $15.87 after tax!!

What can you do with an old pallet? So many things! If you ever come across the opportunity to pick up a few pallets take a look at some of the ideas I have come across for recycling old pallets into furniture and other practical and decorative pieces. I would like to mention that the designs below were found at various sources on the Internet. Where possible I have mentioned the original source, but unfortunately too many do not. If you are the original designer for any of the furniture below, please let me know so that I can add your details. Make furniture for your home You Have Just Been Poisoned Step #1: Clean bottom of glass PrevNext Moisten a paper towel with rubbing alcohol and wipe the bottom of the glass squeaky clean. Step #7: Verify that the etch is complete When the glass is completely dry, hold it up to the light and inspect the etch closely to verify that you haven't missed any spots.If there are flaws in the etching, simply reapply etching cream and rinse as in steps 5 and 6.Repeat until the etch is complete to your satisfaction.

15 Chic and Creative Ways to Tie a Scarf How to tie a half-bow scarf To tie the half-bow scarf, you should first loop the scarf around your neck and tie once– like the first step of tying your shoelaces. Then, take one side of the scarf and make a one loop, as if you were only tying one side of the bow on your shoes. Take the longer section of the scarf and wrap it in front and then behind the entire scarf, next to your neck. Fluff the loop afterwards to taste. Quilling - Turning Paper Strips into Intricate Artworks Quilling has been around for hundreds of years, but it’s still as impressive and popular now as it was during the Renaissance. The art of quilling first became popular during the Renaissance, when nuns and monks would use it to roll gold-gilded paper and decorate religious objects, as an alternative to the expensive gold filigree. Later, during the 18th and 19th centuries, it became a favorite pass-time of English ladies who created wonderful decorations for their furniture and candles, through quilling. Basically, the quilling process consists of cutting strips of paper, and rolling them with a special tool. It sounds simple enough, but special skill is required to create more advanced shapes like marquises, arrowheads or holly leaves.

Upcycled Skirts: Umbrellas Converted into Colorful Clothes Like designing your own styles to dress in but not skilled with complex stitching or comfortable with creating new patterns? From their shapes and size to their scale and appearance, skirts and umbrellas have a lot in common – except, perhaps, that when it comes to an umbrella the interior is designed to be seen publicly and thus is as carefully considered and crafted as the exterior … whereas, well, looking up a skirt … that might get you in trouble. But seriously: used umbrella material is a perfect choice in many regards to upcycle into a skirt, dress, other easily-planned piece of refab clothing, as designer Cecilia Felli discovered during her creative umbrella-to-skirt upcycling experiments. Moreover, since umbrellas are well known for breaking down, this provides a simple do-it-yourself way to take advantage of something that frequently falls apart. Umbrellas come in all kinds of colorful, creative and unique patterns that convert readily into skirt material for women or girls.

6 Life-Changing Uses for Binder Clips (That You Could've Easily Thought Of) from Look What I Found Yes, it may seem like an ordinary binder clip. And it is. Make no mistake -- it will keep your papers organized with the best of them. The BEST. But it's so much more. Oh so much. DIY Gear: Create Your Own Awesome Believe it or not, Do-It-Yourself isn’t just the realm of Bob Vila and that dude Ty on all those Discovery shows. You can, in fact, do it yourself. With a helpful bit of inspiration and an almost complete lack of instruction (exactly how we like it), you can combine found items and a bit of know-how into some seriously awesome stuff for your home – without the obscene price tag that high designers and big box stores would charge you for similar items. Like any good vacation, the planning of any project starts with the destination.

In Less than a Minute Alan Grayson Explains Occupy Wall Street to the 1% While on Real Time with Bill Maher former congressman, and future 2012 House candidate, Alan Grayson explained to the panel the 1% what Occupy Wall Street is all about. Here is the video: The latest edition of Real Time featured one of Bill Maher’s patented balance things out with three Republicans and a Democrat panels, but the Democrat was Alan Grayson. While P.J. fellow panelist P.J.