Standishvoyages. Cobb's Paradox - Root Cause. Cobb’s Paradox is alive and well. In 1995, Martin Cobb worked for the Secretariat of the Treasury Board of Canada. He attended The Standish Group’s CHAOS University, where the year’s 10 most complex information technology (IT) projects are analysed. The high level of failure led Cobb to state his now famous paradox: “We know why projects fail; we know how to prevent their failure—so why do they still fail?”

In 2011, another report into the management of IT projects asks the same question! This time the report was prepared by the Victorian Government Ombudsman, in consultation with the Victorian Auditor-General, it documents another series of failures largely created by executive management decisions. The report entitled Own Motion Investigation into ICT – Enabled Projects, examines 10 major Victorian Government ICT projects that experienced difficulties such as budget and timeframe blowouts or failure to meet requirements. For more on PMOs and to download the KPMG reports see: Why Some Projects Will Always Fail. Project Failure: Cobb’s Paradox. May 27, 2011 | Author: PM Hut | Filed under: Project Management Musings Project Failure: Cobb’s Paradox By Lynda Bourne Cobb’s Paradox states, “We know why projects fail; we know how to prevent their failure – so why do they still fail?”. 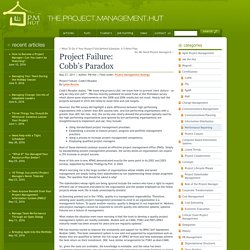 PMI has recently published its latest Pulse of the Profession survey which shows some improvements on the 2008 and 2006 results but not much. Nearly half the projects surveyed in 2010 still failed to meet time and cost targets. However, the PMI survey did highlight a stark difference between high performing organizations with a better than 80% success rate, and low performing organizations with a greater than 40% fail rate. 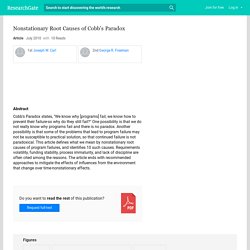 Here are the <a href=" rel="nofollow" target="_blank"> instructions how to enable JavaScript in your web browser</a>. Managing Complex Projects: A New Model - Kathleen B. Hass - Google Books. A world in which every project is a success? “We know why projects fail, we know how to prevent their failure — so why do they still fail?” 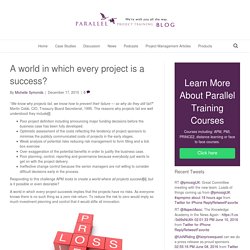 Martin Cobb, CIO, Treasury Board Secretariat, 1995. The reasons why projects fail are well understood they include[i] Poor project definition including announcing major funding decisions before the business case has been fully developed.Optimistic assessment of the costs reflecting the tendency of project sponsors to minimise the publicly communicated costs of projects in the early stages.Weak analysis of potential risks reducing risk management to form filling and a tick box exerciseOver exaggeration of the potential benefits in order to justify the business case.Poor planning, control, reporting and governance because everybody just wants to get on with the project delivery.Ineffective change control because the senior managers are not willing to consider difficult decisions early in the process. A world in which every project succeeds implies that the projects have no risks.

[i] [ii] Risk, Innovation and Cobb’s Paradox. Why Neuroscience in the Workplace? « Key Change Now – Key Change Institute. We live in an exciting age. 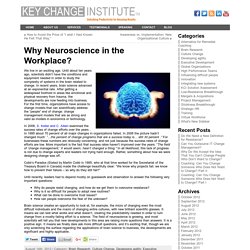 Until about ten years ago, scientists didn’t have the conditions and equipment needed in order to study the complexity of systems in the brain related to change. In recent years, brain science advanced at an exponential rate. After getting a widespread foothold in areas like emotional and physical recovery from trauma, the developments are now feeding into business. For the first time, organizations have access to change models that can scientifically address the “people” end of change: change management models that are as strong and valid as models in economics or technology. In 2008, S. Double Dog Dare - Posts -Cafe CHAOS - Standish Group Blog. Let us consider two different paradoxes: the Montana Paradox and Cobb’s Paradox. 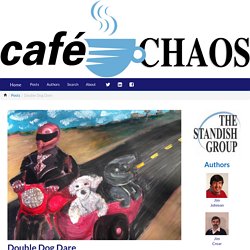 First, the Montana Paradox. It is widely believed by traffic professionals, law enforcement agencies, and bodies of government that reducing speed and enforcing speed limits saves lives. However, is this really the reason behind the results, or are there more commercial aspects to this belief? After all, there is a whole industry built around enforcement of traffic laws. The National Highway Traffic Safety Administration has been promoting the notion that speed kills. Now let us consider Cobb’s Paradox, my very favorite since I named it in our report “Unfinished Voyages,” published in 1996. Hans Monderman, traffic engineer, dared the transportation planners in the Netherlands to reduce traffic lights and signs at busy intersections. Most agile and Scrum projects are small, which means they fit into shared space. 5197. Fesma 7.