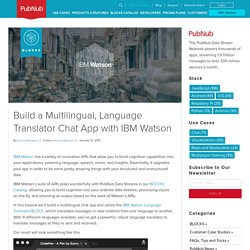 Essentially, it upgrades your app in order to do some pretty amazing things with your structured and unstructured data. IBM Watson’s suite of APIs plays wonderfully with PubNub Data Streams in our BLOCKS Catalog, allowing you to build cognition into your realtime data streams, processing inputs on-the-fly, and returning an output based on the work of Watson’s APIs.

In this tutorial we’ll build a multilingual chat app and utilize the IBM Watson Language Translator BLOCK, which translates messages in near realtime from one language to another. With 11 different languages available, you’ve got a powerful, robust language translator to translate messages as they’re sent and received. Our result will look something like this: Getting Started with IBM Watson on Bluemix. Learn Angular 2 Development By Building 12 Apps. **Course has now been upgraded to the final Angular version with two new projects. 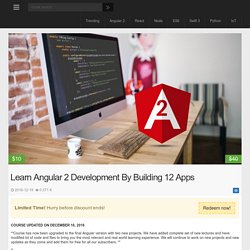 We have added complete set of new lectures and have modified lot of code and files to bring you the most relevant and real world learning experience. 10 Most Productive New Tab Extensions For Google Chrome. Advertisement When you start a new tab in a browser, are you looking to go somewhere or are you looking for information to come to you? 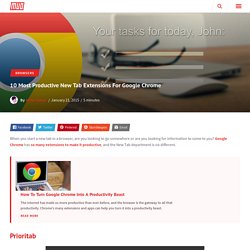 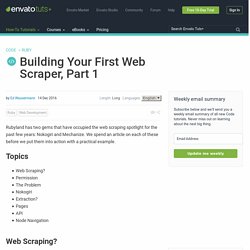 We spend an article on each of these before we put them into action with a practical example. Web Scraping? PermissionThe ProblemNokogiriExtraction? PagesAPINode Navigation There are fancier terms around than web or screen scraping. 7 Incredibly Ambitious Virtual Reality Projects. Programmableweb. Programmableweb. Editor's Note: This is the second part of a two-part series that examines the degree to which built-in biometrics like Apple's Touch ID fingerprint sensor that's present on recent model iPhones improves or worsens device and application security. 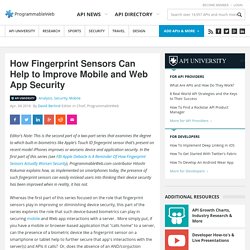 In the first part of this series (see FBI Apple Debacle Is A Reminder Of How Fingerprint Sensors Actually Worsen Security), ProgrammableWeb.com contributor Hitoshi Kokumai explains how, as implemented on smartphones today, the presence of such fingerprint sensors can easily mislead users into thinking their device security has been improved when in reality, it has not. Whereas the first part of this series focused on the role that fingerprint sensors play in improving or diminishing device security, this part of the series explores the role that such device-based biometrics can play in securing mobile and Web app interactions with a server. 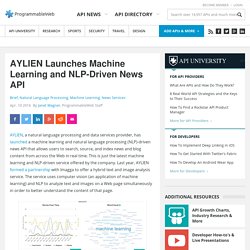 This is just the latest machine learning and NLP-driven service offered by the company. Leftronic's Fetch Tool Retrieves and Visualizes Data from Any HTTP API. Leftronic, a real-time data visualization platform provider, has launched Fetch, a new tool that can retrieve, transform, and visualize data from any HTTP API. 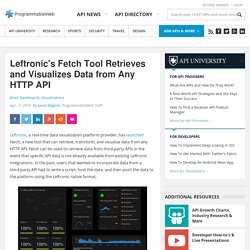 Fetch can be used to retrieve data from third-party APIs in the event that specific API data is not already available from existing Leftronic integrations. In the past, users that wanted to incorporate data from a third-party API had to write a script, host the data, and then push the data to the platform using the Leftronic native format. Leftronic's Fetch Tool Retrieves and Visualizes Data from Any HTTP API. Programmableweb. Programmableweb. In case you haven’t heard of them, A Cloud Guru is the social learning platform for cloud professionals that helps engineers prepare for AWS certification exams. 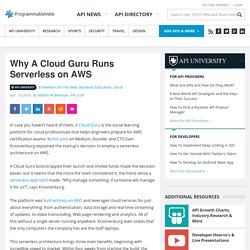 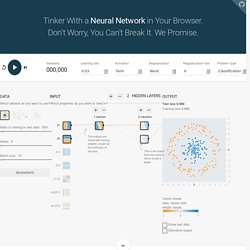 It’s a technique for building a computer program that learns from data. It is based very loosely on how we think the human brain works. First, a collection of software “neurons” are created and connected together, allowing them to send messages to each other. Exploring and Working with Photos in Canva - SitePoint Premium. Programmableweb. Programmableweb. Programmableweb. Two Google developers recently published a draft version of the WebUSB API that provides Web pages direct access to USB devices. 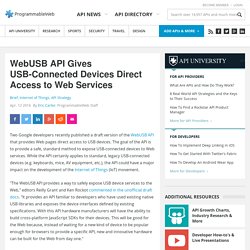 The goal of the API is to provide a safe, standard method to expose USB-connected devices to Web services. While the API certainly applies to standard, legacy USB-connected devices (e.g. keyboards, mice, AV equipment, etc.), the API could have a major impact on the development of the Internet of Things (IoT) movement. LucidCam is an Affordable, Pocket-Sized Virtual Reality Camera. In Brief Lucid VR has raised $2.1 million to make it’s 180-degree virtual reality camera, LucidCam, and it's pocket-sized.

Major Backing. New Remarkably Thin E-Skin Turns Your Body Into a Walking Display. In Brief University of Tokyo researchers have created an ultrathin and ultraflexible organic e-skin that supports PLED and OLED displays. Thin Skin Researchers from the University of Tokyo have created a protective layer of organic material that’s ultrathin and ultraflexible. And the have demonstrated the material’s usefulness by making an OLED display that’s air-stable. This opens the possibility of developing better electronic skin displays, the next major leap in wearable technology.

The thickness (or rather, thinness) and flexibility of wearable electronics is an essential factor in its further development. That is, they weren’t, until a group of researchers led by Professor Takao Someya and Dr. Future Wearables. Image Recognition with the Google Vision API and Ionic. Image recognition allows computers to recognize images in a similar way to humans. In the past developers had to use complex image recognition techniques and algorithms such as pattern recognition.

With the release of the Cloud Vision API by Google, developers now have a powerful suite of tools available from a company with some of the best image recognition functionality available. Programmableweb. Programmableweb. 3 Ways to Choose an Instrument. Edit Article Three Methods:Choosing a VarietyChoosing the Right InstrumentFinding the Right FitQuestions and Answers Learning to play an instrument is one of the coolest things you'll ever do.

Whether you're just starting out in school, decided you wanted to play in a band, or have decided to learn to play music now that the kids have grown, it's a fun and rewarding thing to do. If you don't already know what you want to play, you're in great shape—that means everything is a possibility! See Step 1 for some helpful advice about picking the right instrument for you. Ad Steps. How to Paint: 27 Steps. Featured Article Categories: Featured Articles | Painting In other languages: Español: pintar, Italiano: Dipingere, Português: Pintar, Nederlands: Schilderen, Deutsch: Richtig malen, Русский: рисовать, 中文: 画画, Français: débuter en peinture, Čeština: Jak malovat, Bahasa Indonesia: Melukis. How to Write a Novel (with Examples) Edit Article Four Parts:Writing HelpCreating a Fictional WorldDrafting the NovelRevising the NovelQuestions and Answers.

The ultimate color combinations cheat sheet. Finding a correct color combination is one of the most important steps in designing a stylish and holistic look. This is why we’re offering you this cheat sheet, so you’ll always hit the bullseye when choosing clothes and interior decor. Nine rules for taking the perfect photograph. All About Big Hero 6: Reviews, Ratings, Similar Movies, Trailers & More! Gnod - The Global Network of Discovery. Brian Whitman. Find and Browse Music on Last.fm — Last.fm. Top 15 music APIs to power your next mashup. Rhythm API. The Gracenote Rhythm APIs provide adaptive radio and music recommendation features in a convenient Web service.

Geeklist - A place for geeks to share what they've done, who they did it with and connect with great companies.