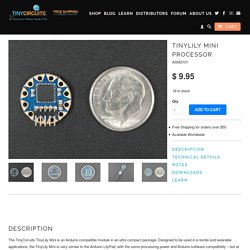 Designed to be used in e-textile and wearable applications, the TinyLily Mini is very similar to the Arduino LilyPad, with the same processing power and Arduino software compatibility – but at 1/12th the size! Arduino and LilyPad CompatibleAtmel Atmega328P processor (same as is used on the Arduino Uno and LilyPad)WashableSewtabs for 8 I/O (4 Digital, 4 Analog / Digital) and 4 Power Sewtabs (2 for power, 2 for ground)Note: To program this board, you need to use the TinyLily Mini USB Board which is sold separately.

PcDuino Acadia - Dev Board - DEV-13610. 32-bit Microcontroller. Xilinx Kintex-7 FPGA KC705 Evaluation Kit. Xadow - Main Board. The module is a microcontroller board based on the controller ATmega32U4 with 32k flash. 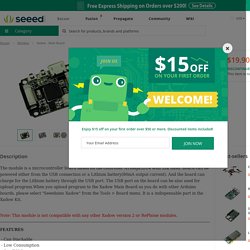 Board can be powered either from the USB connection or a Lithium battery(80mA output current). And the board can charge for the Lithium battery through the USB port. The USB port on the board can be also used for upload program.When you upload program to the Xadow Main Board as you do with other Arduino boards, please select "Seeeduino Xadow" from the Tools > Board menu. It is a indispensable part in the Xadow Kit. LinkIt ONE. What is LinkIt ONE The LinkIt ONE development board is an open source, high performance board for prototyping Wearables and IoT devices. 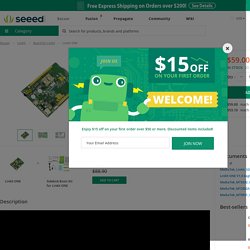 It's based on the world's leading SoC for Wearables, MediaTek Aster (MT2502) combined with high performance Wi-Fi (MT5931) and GPS (MT3332) chipsets to provide you with access to all the features of MediaTek LinkIt. It also provides similar pin-out features to Arduino boards, making it easy for you to connect to various sensors, peripherals, and Arduino shields. RIotBoard Revolutionizing the Internet of Things - Home. Blend — RedBear. Blend is an integrated developement board, we have "blend"ed Arduino with Bluetooth 4.0 Low Energy (aka BLE or Bluetooth Smart) into a single board. 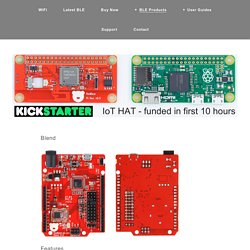 It is targeted for makers to develop low power Internet-Of-Things (IoT) projects quickly and easily. Blend is 100% compatible with sketches and Shields that work with Arduino Leonardo. The micro-controller unit (MCU) is Atmel ATmega32U4 and the BLE chip is Nordic nRF8001. Blend runs as BLE peripheral role only, it allows BLE central role devices to establish connection with. Current supported BLE central devices: iOS 7 or 8. DragonBoard 410c. Propeller Activity Board. 5 things to consider before buying a Raspberry Pi - CNET. Raspberry Pi computers are incredibly fun to tinker with and make it both affordable and possible to have a computer dedicated to one or two very specific tasks around your house. 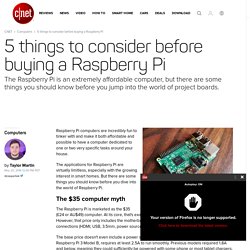 The applications for Raspberry Pi are virtually limitless, especially with the growing interest in smart homes. But there are some things you should know before you dive into the world of Raspberry Pi. The $35 computer myth The Raspberry Pi is marketed as the $35 (£24 or AU$49) computer. At its core, that's exactly what it is, a functioning computer for $35. The base price doesn't even include a power source. If you don't have a spare microSD card lying around, you'll also need one of those.

At this point, you're already sitting at $55 (£38, AU$76), minimum. That may seem excessive, and even if you only spend in the ballpark of $55, it's still dirt cheap. It's a time investment Setting up a new Raspberry Pi only takes a matter of minutes, especially if you purchased an SD card with NOOBS preinstalled. Teensy USB Development Board. The Teensy is a complete USB-based microcontroller development system, in a very small footprint, capable of implementing many types of projects. All programming is done via the USB port. Update: Discussion / Support Forum Teensy Loader Application Software Development Tools. 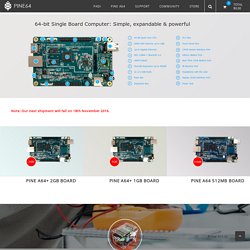 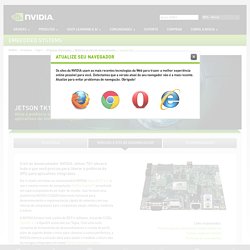 Netduino 3 Wi-Fi : Tech Specs. MicroPython - Python for microcontrollers. A Palm-sized Computer Running Win10 With Build-in Arduino. Kinoma Create - Kinoma. UDOO X86: The Most Powerful Maker Board Ever by UDOO. UDOO X86 is the New PC: the most powerful maker board ever and an Arduino™ 101-compatible platform, all embedded on the same board. 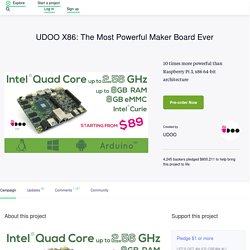 On UDOO X86 you can run all the software available for the PC world, from gaming to video streaming, from graphical editors to professional development platforms, plus all the software for the Arduino™ 101 world, including all the sketches, libraries and the official Arduino™ 101 IDE. Omega2: $5 Linux Computer with Wi-Fi, Made for IoT by Onion. Kickstarter Collections Projects We Love Saved Trending. 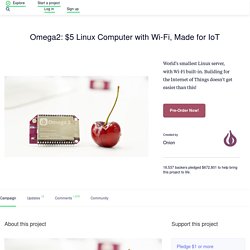 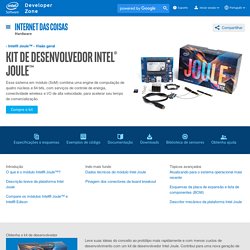 The compatibility of this shield is now extremely good. It supports not only zigbee module, but also wifi and bluetooth module. For some IOT projects, you may need dual xbee modules to convert bluetooth to wifi or vice verse. The Xbee module is widely used in the United States, Canada, Australia, Israel and Europe. Compatibility. DiY biosignals. BeagleBoard.org - black. What is BeagleBone Black? BeagleBone Black is a low-cost, community-supported development platform for developers and hobbyists.

Boot Linux in under 10 seconds and get started on development in less than 5 minutes with just a single USB cable. Touch Board - Bare ConductiveBare Conductive. Banana Pi - A Highend Single-Board Computer: Banana Pi. What is Banana Pi? Banana Pi is a single-board computer. Banana Pi targets to be a cheap, small and flexible enough computer for daily life. Built with ARM Cortex-A7 Dual-core CPU and Mali400MP2 GPU, and open source software, Banana Pi can serve as a platform to make lots of applications for different purposes.

ArduinoBoardUno. OSH: Schematics, Reference Design, Board size The Uno is open-source hardware! You can build your own board using the follwing files: Programming The Uno can be programmed with the Arduino Software (IDE). Select "Arduino/Genuino Uno" from the Tools > Board menu (according to the microcontroller on your board). The ATmega328 on the Uno comes preprogrammed with a bootloader that allows you to upload new code to it without the use of an external hardware programmer. You can also bypass the bootloader and program the microcontroller through the ICSP (In-Circuit Serial Programming) header using Arduino ISP or similar; see these instructions for details. The ATmega16U2 (or 8U2 in the rev1 and rev2 boards) firmware source code is available in the Arduino repository.