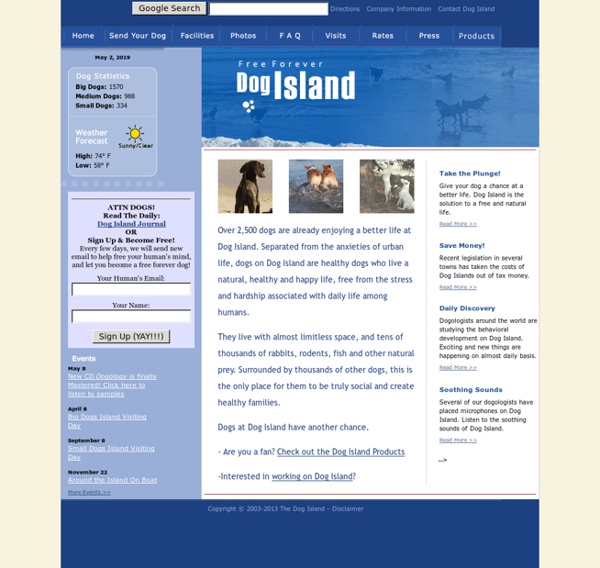 GENOCHOICE - Create Your Own Genetically Healthy Child Online! The Legend of Jackalope – Jackalope It’s an aggressive species, willing to use its antlers to fight. Thus, the jackalope is also sometimes called the “warrior rabbit.” The jackalope is the product of a male jackrabbit and a female antelope. Jackalopes possess an uncanny ability to mimic human sounds. When chased, the jackalope will use its vocal abilities to elude capture. Jackalope milk is particularly sought after because it is believed to be a powerful aphrodisiac—for which reason the jackalope is also sometimes referred to as the ‘horny rabbit.’ The town of Douglas, Wyoming, has declared itself to be the Jackalope capital of America because, according to legend, the first jackalope was spotted there around 1829. The jackalope is now most commonly sighted in the states of Colorado, Wyoming and Nebraska.

McWhortle Enterprises, Inc. Save The Pacific Northwest Tree Octopus Help Save The ENDANGERED From EXTINCTION! The Pacific Northwest Tree Octopus Rare photo of the elusive tree octopus The Pacific Northwest tree octopus (Octopus paxarbolis) can be found in the temperate rainforests of the Olympic Peninsula on the west coast of North America. An intelligent and inquisitive being (it has the largest brain-to-body ratio for any mollusk), the tree octopus explores its arboreal world by both touch and sight. Reaching out with one of her eight arms, each covered in sensitive suckers, a tree octopus might grab a branch to pull herself along in a form of locomotion called tentaculation; or she might be preparing to strike at an insect or small vertebrate, such as a frog or rodent, or steal an egg from a bird's nest; or she might even be examining some object that caught her fancy, instinctively desiring to manipulate it with her dexterous limbs (really deserving the title "sensory organs" more than mere "limbs",) in order to better know it. Why It's Endangered

California's Velcro Crop Under Challenge by Ken Umbach California's important Velcro crop, vital to the clothing, footwear, and sporting goods industries, has been severely stressed by drought, disease, and pests. Background Velcro®, an engineered crop, consists of two distinct strains: hooks and loops. As any user of Velcro knows, a strip of hooks clings to a strip of loops as the springy hook-shaped fibers latch through tiny but firm loops. California's climate and soil conditions make the state an ideal venue for and successful producer of both strains of Velcro. For competitive and industrial confidentiality reasons, of course, the crop is not widely highlighted in crop reports. The Issues All in all, cultivation is a demanding and costly process, making profit margins unusually vulnerable to price swings and crop productivity losses. Status As the chart and table below so starkly show, the combined assaults on the Velcro crop have had marked effects. Recommendations Postscript (December 1996).

Aluminum Foil Deflector Beanie Welcome to the AFDB Website This site is dedicated to spreading the word about the Aluminum* Foil Deflector Beanie and how it can help the average human. Here you will find a description of AFDBs, how to make and use them, and general information about related subjects. I hope that you find the AFDB Homepage to be an important source of AFDB know-how and advocacy. What Is An AFDB? An Aluminum Foil Deflector Beanie (AFDB) is a type of headwear that can shield your brain from most electromagnetic psychotronic mind control carriers. What are you waiting for? REBUTTAL TO THE MIT ANTI-AFDB STUDY: Rahimi et al.' BEWARE OF COMMERCIAL AFDBS: Since you should trust no one, always construct your AFDB yourself to avoid the risk of subversion and mental enslavement. AMIGA AND LINUX USERS: It is advised that you get a copy of MindGuard for your personal anti-psychotronic needs.