Hoax or No Hoax? Strategies for Online Comprehension and Evaluation 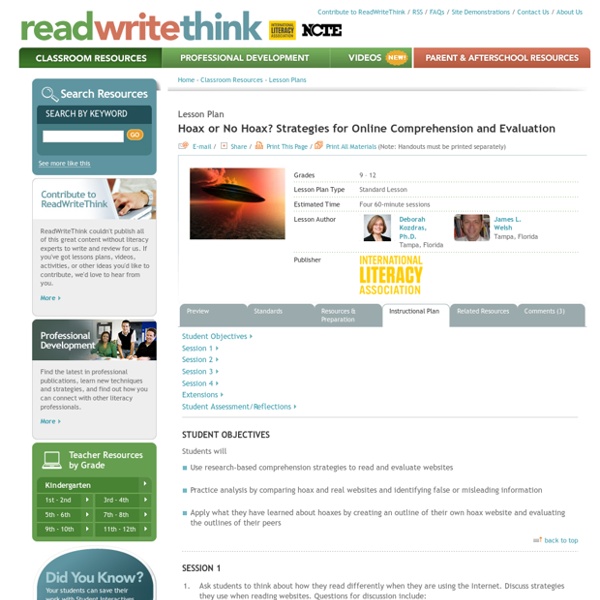 ReadWriteThink couldn't publish all of this great content without literacy experts to write and review for us. If you've got lessons plans, videos, activities, or other ideas you'd like to contribute, we'd love to hear from you. More Find the latest in professional publications, learn new techniques and strategies, and find out how you can connect with other literacy professionals. More Teacher Resources by Grade Your students can save their work with Student Interactives. More Home › Classroom Resources › Lesson Plans Lesson Plan Student Objectives Session 1 Session 2 Session 3 Session 4 Extensions Student Assessment/Reflections Students will Use research-based comprehension strategies to read and evaluate websitesPractice analysis by comparing hoax and real websites and identifying false or misleading informationApply what they have learned about hoaxes by creating an outline of their own hoax website and evaluating the outlines of their peers back to top Session 1 Session 2 Session 3 Session 4

How to teach your students about fake news Fake news is making news, and it’s a problem. Not only did a BuzzFeed data analysis find that viral stories falsely claiming that the Pope endorsed Donald Trump and that Hillary Clinton sold weapons to terrorists receive more Facebook attention than the most popular news stories from established news outlets, but a false story about child trafficking in a Washington, D.C. pizza restaurant inspired a North Carolina man to drive 5 hours with a shotgun and other weapons to investigate. This lesson gives students media literacy skills they need to navigate the media, including how to spot fake news. Subjects Social studies, U.S. government, civics, journalism

Getting it Right: Fact-Checking in the Digital Age Jane Elizabeth, a veteran journalist and adjunct professor at Old Dominion University, settled on a simple exercise to test her class on fact-checking a few semesters back. She gave her students a news story and told them to identify the parts of the article that a thorough fact checker would work to verify. As she flipped through the finished assignments, Elizabeth noticed each student made the same error. Information Literacy - Academic Skills - LibGuides at Edith Cowan University The American Library Association defines "information literacy" as "a set of abilities requiring individuals to recognize when information is needed and have the ability to locate, evaluate, and use effectively the needed information." (Association of College and Research Libraries: Information Literacy Competency Standards for Higher Education). Information Literacy and Higher Education:

ALA President Julie Todaro releases statement on Libraries, the Association, Diversity and Inclusion CHICAGO – Today American Library Association President Julie Todaro released the following statement regarding the invaluable role libraries and librarians will play within their communities as many search for common ground after the election. "After a contentious campaign season filled with divisive rhetoric, we are now hearing from our members and in the news media about incidents of bigotry and harassment within our communities. From children acting out in schools to adults participating in violent acts, it is clear that our nation is struggling in the wake of this election. Higher Education Where does information literacy fit within Higher Education? The term “information literacy” is widely accepted in Higher Education (HE). Initially the term “information skills” was used, however, this was felt to be too mechanistic and tended to only represent the ‘behaviours’ associated with information literacy, such as knowing how to use various tools, rather than attitudes and ways of thinking.

After Election, Librarians, Book Creators Vow To Support Children At the Ethel Walker School in Simsbury, CT, 20 minutes outside of Hartford, librarian Nishette Isaacs organized an election night watch party, preparing for the possibility of the historic event of the first woman winning the presidency. Since the majority of the 250 students at this private girls’ school are boarders, kids were invited to the library for a pajama party to view news coverage. “We didn’t want anyone to feel uneasy or unsafe, whether they were for or against any party,” explains Isaacs.

Handouts, Worksheets, & Activities for Information Literacy Teaching & Learning Department I Services Handouts: Information on key concepts & skills Worksheets: Exercises for students Activities: In-class activities to be facilitated by an instructor Additional Resources More about information literacy. Handouts The Post-Election Library It’s been a hard week for many Americans, as Tuesday’s election amplified divisions within communities and flamed feelings of isolation, anger and fear among much of the population. As the dust settles, libraries across the country are coming up with ways, large and small, to make all people feel safe and welcome, regardless of who they are or which candidates they supported. Here are some of those ways. Bringing neighbors together On Thursday, Nov. 10, more than 200 people showed up for a post-election conversation with community leaders at Princeton (N.J.)

Fake news on Facebook is a real problem. These college students came up with a fix in 36 hours. Anant Goel, Nabanita De, Qinglin Chen and Mark Craft at Princeton’s hackathon (Anant Goel) When Nabanita De scrolled through her Facebook feed recently, she felt afraid. There were so many posts with competing information and accusations about Donald Trump and Hillary Clinton that she didn’t know how to begin deciphering the fearmongering from the reality. Information Literacy Lessons Crucial in a Post-Truth World Why Librarians Are More Crucial Than Ever In the aftermath of the US presidential election, I’ve been reflecting on what it means to live in a post-truth world. I was shocked to read several accounts explaining that a majority of Americans receive their news via Facebook. “Trending stories” are highlighted in the right-hand margin of your Facebook page and serve as click bait. Since Facebook has already determined your political bias (check it out– it’s in your settings under US Politics), these stories play into each user’s biases and fears and are selected by algorithms, not people.

Teaching Information Literacy Now Last week, a new study from Stanford University revealed that many students are inept at discerning fact from opinion when reading articles online. The report, combined with the spike in fake and misleading news during the 2016 election, has school librarians, including me, rethinking how we teach evaluation of online sources to our students. How can we educate our students to evaluate the information they find online when so many adults are sharing inaccurate articles on social media? While social media isn’t the only reason for the surge in fake news over the last 10 years, it’s certainly making it harder for information consumers of every age to sort through fact and fiction. As articles about the Stanford study get shared around Facebook, I have two thoughts. One, I have to teach this better.