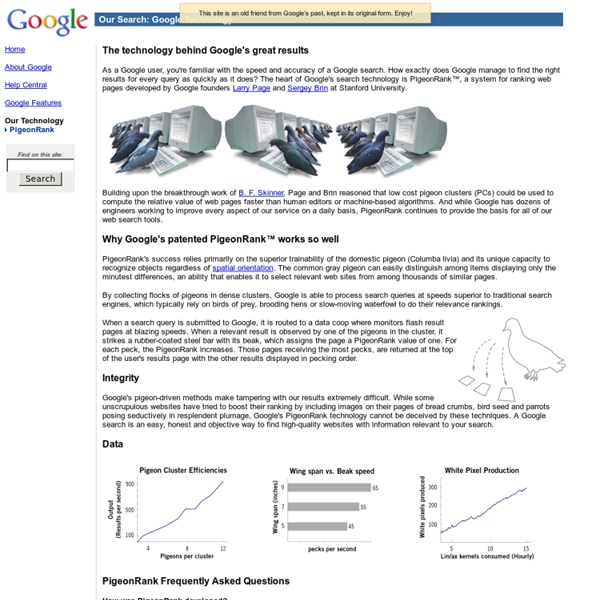 The technology behind Google's great results As a Google user, you're familiar with the speed and accuracy of a Google search. How exactly does Google manage to find the right results for every query as quickly as it does? The heart of Google's search technology is PigeonRank™, a system for ranking web pages developed by Google founders Larry Page and Sergey Brin at Stanford University. Building upon the breakthrough work of B. F. Why Google's patented PigeonRank™ works so well PigeonRank's success relies primarily on the superior trainability of the domestic pigeon (Columba livia) and its unique capacity to recognize objects regardless of spatial orientation. By collecting flocks of pigeons in dense clusters, Google is able to process search queries at speeds superior to traditional search engines, which typically rely on birds of prey, brooding hens or slow-moving waterfowl to do their relevance rankings. Integrity Data PigeonRank Frequently Asked Questions How was PigeonRank developed?

Satire for Smart People; The Truth for You Publications by Googlers Google publishes hundreds of research papers each year. Publishing is important to us; it enables us to collaborate and share ideas with, as well as learn from, the broader scientific community. Submissions are often made stronger by the fact that ideas have been tested through real product implementation by the time of publication. We believe the formal structures of publishing today are changing - in computer science especially, there are multiple ways of disseminating information. Open Source We understand the value of a collaborative ecosystem and love open-source software. Product and Feature Launches With every launch, we're publishing progress and pushing functionality. Industry Standards Our researchers are often helping to define not just today's products but also tomorrow's. Resources "Resources" doesn't just mean tangible assets but also intellectual. Impact Couple big challenges with big resources and Google offers unprecedented research opportunities.

Gary: Landlord of the Flies IT’S OVER!!! -ish. Gary showed up both sober and composed, and the case was finally heard. This whole time I had been hoping it would all play out like an epic courtroom drama, where Gary had come up with some sinister web of lies and in the end he calls his surprise witness; James (the tenant he stole from), Dan (the other tenant he evicted) or Mat (the Indian friend he called a ‘spic’) to the stand and unravels my entire case. Sadly this is not how it played out. A quick run through: I presented a shortened version of my case, explaining that I was asking for my security deposit back after I was evicted for refusing to shut the door on the police.Gary responded that he didn’t want me to let the police in because he was tired and wanted to go to bed, and the only reason the cops were there was to harass him. If he got to $5000 with just the police reports and notes, I wonder what I could have gotten with the emails and voicemail? …Still, you never know.

Search. Explore. Experience – Apture How to Stop Worrying and Learn to Love the Internet - by Douglas Adams [DNA] This piece first appeared in the News Review section of The Sunday Times on August 29th 1999. A couple of years or so ago I was a guest on Start The Week, and I was authoritatively informed by a very distinguished journalist that the whole Internet thing was just a silly fad like ham radio in the fifties, and that if I thought any different I was really a bit naïve. It is a very British trait – natural, perhaps, for a country which has lost an empire and found Mr Blobby – to be so suspicious of change. But the change is real. Then there’s the peculiar way in which certain BBC presenters and journalists (yes, Humphrys Snr., I’m looking at you) pronounce internet addresses. I suppose earlier generations had to sit through all this huffing and puffing with the invention of television, the phone, cinema, radio, the car, the bicycle, printing, the wheel and so on, but you would think we would learn the way these things work, which is this: ‘Yes, child, that’s why they all went mad.