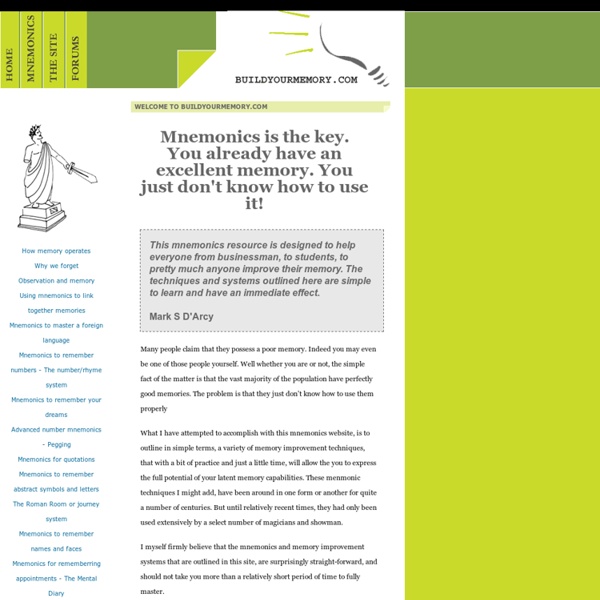 This mnemonics resource is designed to help everyone from businessman, to students, to pretty much anyone improve their memory. The techniques and systems outlined here are simple to learn and have an immediate effect. Mark S D'Arcy Many people claim that they possess a poor memory. Indeed you may even be one of those people yourself. Well whether you are or not, the simple fact of the matter is that the vast majority of the population have perfectly good memories.

How to Improve Your Memory: Tips and Exercises to Boost Brainpower Harnessing the power of your brain They say that you can’t teach an old dog new tricks, but when it comes to the brain, scientists have discovered that this old adage simply isn’t true. The human brain has an astonishing ability to adapt and change—even into old age. This ability is known as neuroplasticity. With the right stimulation, your brain can form new neural pathways, alter existing connections, and adapt and react in ever-changing ways. The brain’s incredible ability to reshape itself holds true when it comes to learning and memory.

How Lego Became The Apple Of Toys Every September, largely unbeknownst to the rest of the company, a group of around 50 Lego employees descends upon Spain’s Mediterranean coast, armed with sunblock, huge bins of Lego bricks, and a decade’s worth of research into the ways children play. The group, which is called the Future Lab, is the Danish toy giant’s secretive and highly ambitious R&D team, charged with inventing entirely new, technologically enhanced "play experiences" for kids all over the world. Or, as Lego Group CEO Jørgen Vig Knudstorp puts it, "It’s about discovering what’s obviously Lego, but has never been seen before." On a Tuesday morning, the group is gathered in a book-lined room just off the pool at the Hotel Trias, in a sleepy town called Palamós, where they’ve met each of the last six years. There are bespectacled dudes in futuristic sneakers, a small cohort of stylish blonde women, and a much larger contingent of techie millennial guys in superhero T-shirts, all filling rows of folding chairs.

How to Teach Handwashing to Kids Teaching Hand Washing Information and Resources For Parents & Caregivers Teaching kids about hand washing is not just important to keep them healthier in childhood... but all through life. The sad fact is that many, many adults don't seem to believe that hand washing is important, including the adults who prepare our food!

Ten Ways to Find Free Textbooks Online Going to university is expensive, and textbooks can make the bill go even higher. However, you don't have to break the bank to finance a good education; there are plenty of places on the Web where you can find and download free online books for nearly any class available. Here are ten sources on the Web you can use to find free content for many college classes, all freely available to either download and print offline or view online in your browser. 1. Use Google The first place to start when looking for a textbook is Google, using the filetype command.

Friedrich Nietzsche on Why a Fulfilling Life Requires Embracing Rather than Running from Difficulty German philosopher, poet, composer, and writer Friedrich Nietzsche (October 15, 1844–August 25, 1900) is among humanity’s most enduring, influential, and oft-cited minds — and he seemed remarkably confident that he would end up that way. Nietzsche famously called the populace of philosophers “cabbage-heads,” lamenting: “It is my fate to have to be the first decent human being. I have a terrible fear that I shall one day be pronounced holy.” In one letter, he considered the prospect of posterity enjoying his work: “It seems to me that to take a book of mine into his hands is one of the rarest distinctions that anyone can confer upon himself.

10 Simple Postures That Boost Performance Psychological research suggests simple actions can project power, persuade others, increase empathy, boost cognitive performance and more… We tend to think of body language as something that expresses our internal states to the outside world. But it also works the other way around: the position of our body also influences our mind. As the following psychological research shows, how we move can drive both thoughts and feelings and this can boost performance. 1.

Albert Camus on Happiness, Unhappiness, and Our Self-Imposed Prisons “For the first time in history,” Bertrand Russell asserted in reflecting on the impact of the Industrial Revolution, “it is now possible … to create a world where everybody shall have a reasonable chance of happiness.” Indeed, we’ve pounced on that chance with overzealous want: Ours is a culture so consumed with the relentless pursuit of happiness, its secrets and its science, that it layers over the already uncomfortable state of unhappiness a stigma of humiliation and shame. But unhappiness can have its own dignity and can tell us as much, if not more, about who we are than happiness. That’s precisely what French philosopher and Nobel laureate Albert Camus (November 7, 1913–January 4, 1960) considers in a portion of his private writings, collected in Notebooks 1951–1959 (public library). [Oscar Wilde] wanted to place art above all else. But the grandeur of art is not to rise above all.

A Life Worth Living: Albert Camus on Our Search for Meaning and Why Happiness Is Our Moral Obligation “To decide whether life is worth living is to answer the fundamental question of philosophy,” Albert Camus (November 7, 1913–January 4, 1960) wrote in his 119-page philosophical essay The Myth of Sisyphus in 1942. “Everything else … is child’s play; we must first of all answer the question.” One of the most famous opening lines of the twentieth century captures one of humanity’s most enduring philosophical challenges — the impulse at the heart of Seneca’s meditations on life and Montaigne’s timeless essays and Maya Angelou’s reflections, and a wealth of human inquiry in between.

Brave Genius: How the Unlikely Friendship of Scientist Jacques Monod and Philosopher Albert Camus Shaped Modern Culture What makes a good life, a meaningful life, a life of purpose? And how can one live it amidst pain and destruction; how can the human spirit soar in the face of crushing adversity? The meaning of life resides in the answers to these questions, which countless luminaries have been asking since the dawn of recorded time, and which an unlikely duo of Nobel-laureate friends — revered writer, journalist and philosopher Albert Camus and pioneering biologist Jacques Monod — set out to answer during one of the darkest periods of human history, the peak of World War II. In Brave Genius: A Scientist, a Philosopher, and Their Daring Adventures from the French Resistance to the Nobel Prize (public library), molecular biology and genetics professor Sean B. It was the Occupation of Paris that served, as Carroll poignantly puts it, as the “perverse catalyst” that sparked each man’s genius and propelled them into intersecting trajectories of greatness as they entered each other’s lives. My dear Monod.

How to Love: Legendary Zen Buddhist Teacher Thich Nhat Hanh on Mastering the Art of “Interbeing” What does love mean, exactly? We have applied to it our finest definitions; we have examined its psychology and outlined it in philosophical frameworks; we have even devised a mathematical formula for attaining it. And yet anyone who has ever taken this wholehearted leap of faith knows that love remains a mystery — perhaps the mystery of the human experience. Learning to meet this mystery with the full realness of our being — to show up for it with absolute clarity of intention — is the dance of life. That’s what legendary Vietnamese Zen Buddhist monk, teacher, and peace activist Thich Nhat Hanh (b. October 11, 1926) explores in How to Love (public library) — a slim, simply worded collection of his immeasurably wise insights on the most complex and most rewarding human potentiality.