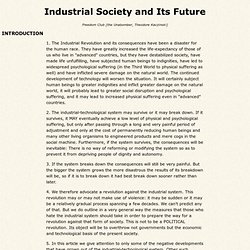 The Industrial Revolution and its consequences have been a disaster for the human race. They have greatly increased the life-expectancy of those of us who live in "advanced" countries, but they have destabilized society, have made life unfulfilling, have subjected human beings to indignities, have led to widespread psychological suffering (in the Third World to physical suffering as well) and have inflicted severe damage on the natural world.

The continued development of technology will worsen the situation. It will certainly subject human beings to greater indignities and inflict greater damage on the natural world, it will probably lead to greater social disruption and psychological suffering, and it may lead to increased physical suffering even in "advanced" countries. 2. 3. 4. 5. 6. 7. Comment on the Unabomber's Manifesto. © 2005 Paul Cooijmans FBI sketch of the Unabomber Introduction The Unabomber, real name Theodore (Ted) Kaczinski, committed sixteen bomb attacks from 1978 to 1995, killing three and injuring twenty-three persons. 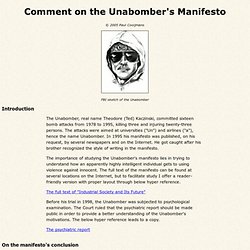 The attacks were aimed at universities ("Un") and airlines ("a"), hence the name Unabomber. In 1995 his manifesto was published, on his request, by several newspapers and on the Internet. The importance of studying the Unabomber's manifesto lies in trying to understand how an apparently highly intelligent individual gets to using violence against innocent. The full text of "Industrial Society and Its Future" Before his trial in 1998, the Unabomber was subjected to psychological examination. The psychiatric report On the manifesto's conclusion The Unabomber's central and fatal conclusion can be summed up as: Technological society is incompatible with individual freedom and must therefore be destroyed and replaced by primitive society so that people will be free again. 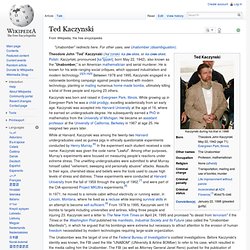 He is known for his wide-ranging social critiques, which opposed industrialism and modern technology.[2][3] [4][5] Between 1978 and 1995, Kaczynski engaged in a nationwide bombing campaign against people involved with modern technology, planting or mailing numerous home-made bombs, ultimately killing a total of three people and injuring 23 others. Kaczynski was born and raised in Evergreen Park, Illinois. While growing up in Evergreen Park he was a child prodigy, excelling academically from an early age. Kaczynski was accepted into Harvard University at the age of 16, where he earned an undergraduate degree. He subsequently earned a PhD in mathematics from the University of Michigan.