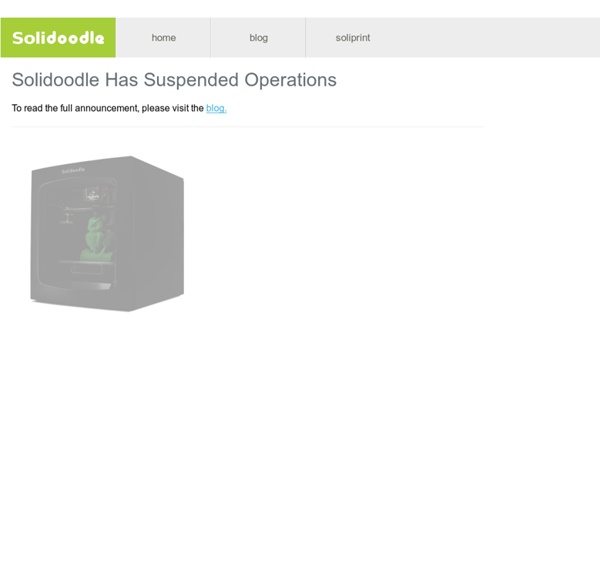 AO-101 3D Printer Inventory Alert: The LulzBot TAZ 5 is currently only available on LulzBot.com to ship from Canada and the United Kingdom, and may take 2-6 weeks to arrive if being delivered to the United States. We encourage U.S. customers to buy a LulzBot TAZ 5 today from one of our U.S.-based resellers, including: SparkFun Electronics, MatterHackers, and Amazon.com! dood présente DOM: Digital Object Maker The project Who are we? We are two childhood friends with complementary skills: mechanical engineering, business, arts, marketing, music, teaching... 3D printing has been a passion of ours for years. The Printer That Can Print A 2,500 Square Foot House In 20 Hours. We have seen huge advancements in 3D printing. We’ve even seen oversized wrenches printed that measure 1.2 meters in length. Now, we can print an entire 2,500 sqft house in 20 hours.

My Region - 3-D printer by Sask. man gets record crowdsourced cash A Saskatchewan man who has developed an affordable 3D printer has attracted worldwide attention and more than $700,000 in crowdsourced funding. Rylan Grayston, 28, from Yorkton, said curiosity fuelled his quest to create a 3D copier that sells for just $100. Other high-tech 3D printers sell for several thousand dollars or more. "I didn't have enough money for a 3D printer that I wanted, so I just started thinking about how can I do this myself?" Grayston told CBC News in an interview at a shop in Saskatoon where he is working with his brother on the project. "All I want to do is invent," Grayston said about the possible riches associated with an affordable 3D printer.

Mota $99 3D Printer: Too Good To Be True An affordable yet high quality consumer 3D printer has turned out too good to be true, surprising no one. The 3D printer market is generally sitting in a quasi-limbo state that’s progressed beyond proving itself on early adopters willing to shell out serious dollar to live the dream, yet still has a very long way to go — and specifically a lot of squeezing of price-tags and smoothing of processes — before it can arrive at the joyous nirvana of mass adoption. Analyst Gartner would describe this moment as the descent into hell the trough of disillusionment.

Arduino Leaks a Peek of Their Upcoming 3D Printer Arduino, known for creating an easy-to-use microcontroller revolution, is about to launch its own 3D printer. The Arduino Materia 101 made its global debut earlier today on the official Arduino twitter account with a photo of a boxy white and teal FDM printer and a note that Arduino co-founder Massimo Banzi is showing the printer live on Italian TV. It also states that the printer will be presented next weekend at Maker Faire Rome. In the image, the printer appears to have an LCD screen, a control knob, and a switch on the front plate.