Conflicting Perspectives in Ted Hughes’s Birthday Letters. Conflict is often a key element in every narrative, and behind the poems in Birthday Letters, Ted Hughes attempts to resolve a range of conflicting perspectives on the tragic outcome of his marriage to the poet Sylvia Plath. Hidden in his poetry, these reminiscing events, personalities and situations bring to light the opinions and regrets of Hughes, sometimes very subjectively. Ted Hughes’ poems “Red” and “The Minotaur” portray many conflicting perspectives on his relationship with Sylvia Plath. The related film Sylvia (2003), directed by Jeffs is particularly interesting as it draws on the same relationship, but is from Plath’s perspective.

The picture book The Emperors New Clothes presents insight into the way perspectives are portrayed and how they conflict. The poem Red is Hughes’ personification of colours into his wife’s personalities in his attempt to analyse her psyche. A conflicting perspective of Hughes and Plath’s relationship is shown through Jeffs’ film Sylvia. Ted Hughes And Sylvia Plath Essay. “Red” by Ted Hughes commentary by Mrs Bernadette Moore: St. Peter’s Catholic College~Tuggerah « Melmcguinness's Blog. TED HUGHES RED Analysis In Hughes’ poem RED, the last in his anthology, Birthday Letters, Hughes adapts/ subverts Plath’s style of utilising colours to represent various feelings and ideas. 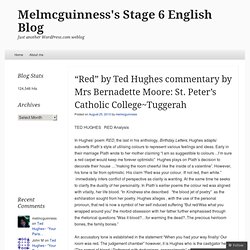 Early in their marriage Plath wrote to her mother claiming “I am so suggestible to colours…I’m sure a red carpet would keep me forever optimistic” Hughes plays on Plath’s decision to decorate their house …”making the room cheerful like the inside of a valentine”. However, his tone is far from optimistic. His claim “Red was your colour. /If not red, then white.” immediately infers conflict of perspective as clarity is wanting. An accusatory tone is established in the statement “When you had your way finally/ Our room was red. “Only the bookshelves escaped into whiteness.” Dissociated within their relationship “I felt it raw-like crisp gauze edges/Of a stiffening wound” the harsh critical metaphor bemoans the constant unyielding pain felt by both. Like this: Like Loading... Tulips - A poem by Sylvia Plath. Poet: Sylvia PlathPoem: Tulips Volume: The Collected Poems Year: Published/Written in 1961 Comment 33 of 33, added on August 7th, 2013 at 9:16 AM. uWYTYOmNaHJnmUWr Hi there, I love your website if I am sincere. 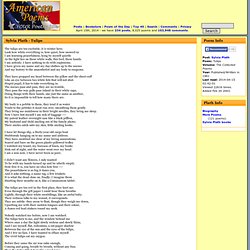 Wherever did you receive it built? Free Dating sites from Dominican Republic Comment 32 of 33, added on August 28th, 2012 at 6:04 AM. plumbers Clearwater Florida I hope i am posting in the right section.. If you have any questions or queries you can just post here you can follow links from my signature veleobefe from United States Comment 31 of 33, added on August 26th, 2012 at 2:36 PM. Maids service in San jose CA howdy i hope that i am posting in the right section.. ColeSotowrile from United States Are you looking for more information on this poem? Essay: The poem Red by Ted Hughes concludes the collection Birthday Letters. These poems have been written long after his wife, Sylvia Plath, death. All the poems are a direct response to Sylvia Plath s poetry.