Want People to Return Your Emails? Avoid These Words [INFOGRAPHIC] 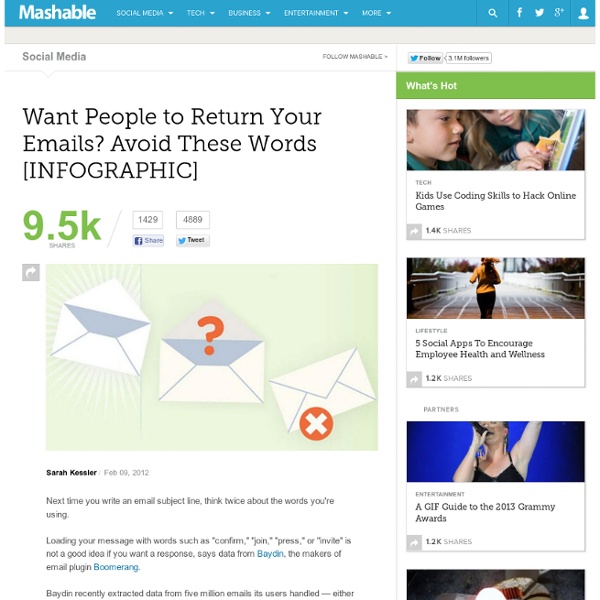 Next time you write an email subject line, think twice about the words you're using. Loading your message with words such as "confirm," "join," "press," or "invite" is not a good idea if you want a response, says data from Baydin, the makers of email plugin Boomerang. Baydin recently extracted data from five million emails its users handled — either using the company's "email game" or scheduled for later via Boomerang. It found that some subject-line words, such as "apply" and "opportunity," got more responses than words from the aforementioned list. Its data also suggests the best time to send emails is before work. Already sending emails packed with "opportunity" at 6 a.m. and not getting a response? Baydin's average email game player deleted about half of the 147 messages he or she received each day. Images courtesy of iStockphoto, chezzzers Related:  Personal Motivation • acperkins

Nobody told me inShare4 there’d be days like this where I’d wake up in the morning feeling like it’s just another day But then the email piles up The phone’s ringing A pile of papers crashes to the floor I’ve got to schedule 6 appointments File those darn taxes Buy more printer toner Fix that stupid fax machine Chase down those unpaid invoices Nobody told me when I started my business. Nobody told me there’d be days like this, where I feel like I’m losing my mind and I can’t believe I’m in charge and there’s no one else to ask. But then a client emails and tells me What an amazing job I did And a friend asks if I want to go for a long lunch Thursday And my kid’s sick but I don’t have to worry about childcare Because I don’t have to ask anyone but me if I can work from home And I’ve got dinner cooking on the stove I just accepted a delivery Tomorrow’s meeting is over cocktails with a long time friend turned business partner A dash to the printer’s to pick up business cards means meeting old friends Now the mail is here and

Mobile Screenfest - International Mobile Festivals The Pocket Films Festival Japan. Held in Yokohama, Japan beginning in 2007, it featured 48 movies, all of which were shot using cellphone video cameras. The 48 films presented at the festival were selected from over 400 international entries of up to 5 minutes duration. International Festival of Cellphone Cinema India. Mobifest, Canada The 4th annual Nokia Mobifest Toronto was held in Oct 2009 with the year's categories including animation, shot on mobile and best of festival. Dogma Mobile Film Festival Denmark. Cognitive Endurance Basics for Software Developers A few weeks ago Michael published a post called Product Software Development Is a Marathon. The message of this post is: if you want to come up with a decent product, you’ve got to brace yourself up for a long-distance marathon run. I agree to the point of long-distance and endurance, but I’d rather compare this not to a marathon but to a triathlon race. Triathlon requires diverse skills, you not only have to run, but to swim and to bike, and, as we know, good software developers need diverse skills, too. As in triathlon, diverse skills needed to develop a software product require that you keep up your endurance with all of them, learning to alternate your activities, such as coding, researching, coming up with solutions and empathizing with others while keeping a workable race rate. . This diagram shows the interrelated network of the processes going on in our brains as we work. The insidious sources of cognitive bummers can be broken down into 3 groups: Process-related. Individual.

The Magic of Doing One Thing at a Time - Tony Schwartz by Tony Schwartz | 8:53 AM March 14, 2012 Why is it that between 25% and 50% of people report feeling overwhelmed or burned out at work? It’s not just the number of hours we’re working, but also the fact that we spend too many continuous hours juggling too many things at the same time. What we’ve lost, above all, are stopping points, finish lines and boundaries. Technology has blurred them beyond recognition. Wherever we go, our work follows us, on our digital devices, ever insistent and intrusive. Tell the truth: Do you answer email during conference calls (and sometimes even during calls with one other person)? The biggest cost — assuming you don’t crash — is to your productivity. But most insidiously, it’s because if you’re always doing something, you’re relentlessly burning down your available reservoir of energy over the course of every day, so you have less available with every passing hour. I know this from my own experience. 1. 2. 3. 1. 2. 3.

JESS3 3 Words That Guarantee Failure People who fail to achieve goals almost always signal their intent to fail by using three little words: "I will try..." There are no three words in the English language that are more deceptive, both to the person who says them and the person who hears them. People who say "I will try" have given themselves permission to fail. People who hear "I will try" and don't realize what it really means are fooling themselves, by thinking there's a chance that the speaker will actually succeed. People who really and truly achieve goals never say "I will try." Instead, they always say "I will do" something–or, better yet, "I must do" whatever the task is. As a wise (though fictional) guru once said: "Do, or do not.

Two Lists You Should Look at Every Morning - Peter Bregman by Peter Bregman | 11:00 AM May 27, 2009 I was late for my meeting with the CEO of a technology company and I was emailing him from my iPhone as I walked onto the elevator in his company’s office building. I stayed focused on the screen as I rode to the sixth floor. The world is moving fast and it’s only getting faster. So we try to speed up to match the pace of the action around us. But that’s a mistake. Never before has it been so important to say “No.” It’s hard to do because maybe, just maybe, that next piece of information will be the key to our success. A study of car accidents by the Virginia Tech Transportation Institute put cameras in cars to see what happens right before an accident. The world is changing fast and if we don’t stay focused on the road ahead, resisting the distractions that, while tempting, are, well, distracting, then we increase the chances of a crash. Now is a good time to pause, prioritize, and focus. Some people already have the first list.

Motivating students to learn Dr Andrew Martin, MAPS Motivation is students' energy and drive to learn, work effectively, and achieve to their potential at school. Motivation plays a large part in students' interest in and enjoyment of school and study and underpins their achievement. In this article DR ANDREW MARTIN MAPS describes a model of student motivation - the Student Motivation Wheel - and discusses some strategies practitioners and parents can use to enhance students' motivation. THE STUDENT Motivation Wheel (Martin, 2003) reflects the thoughts, feelings and behaviours underpinning academic engagement at school and separates motivation into factors that reflect enhanced motivation, those that reflect constrained motivation, and those that reflect reduced motivation. These are called boosters, mufflers, and guzzlers respectively. Boosters include self-belief, learning focus, value of schooling, persistence, study management, and planning. A tale of two students Strategies for practitioners and parents Conclusion

16 Simple Rules for Living a Successful Life Is your day-to-day life full of stress and chaos? Are you scrambling to find a peaceful moment in the day when you can put your feet up and relax? Are you rushed, stressed out and ready to call it quits. Why is that so? Who is responsible for it? Why have we made it so difficult? The solution is simple: simply your life. #1 Believe in yourself , but be aware of your limitations The first step to accomplishing all your goals and making your dreams come true starts with this simple realisation that you are human: you are not perfect and you can’t do everything alone. Always keep things realistic. Own up when you make a mistakeSet goals, and enjoy the journey #2 De-clutter & simplify You have a thousand different things screaming for attention: you have to tidy up the kids’ room again; you have to do the dishes and laundry; and the never-ending household chores are waiting. #3 Use everything in moderation Spend less money than you makeWatch your dietWatch less TV #4 Keep things in perspective

Infographic: A Look At The Size And Shape Of The Geosocial Universe In 2011 Thanks to Jesse Thomas of interactive design agency JESS3, we now have an updated look at the structure of the geosocial universe as it exists in anno domini 2011. It wasn’t so long ago that the International Astronomical Union booted Pluto out of the solar system or that MySpace was overtaking Yahoo! and Google as the most-visited site in the U.S. As you’ll see, Thomas’ infographic shows the current size of major social networks as well as the other well-known online services we use on a daily basis relative to their peers. Some other notable trends in the geosocial universe, courtesy of JESS3: Mobile: 5.3 billion mobile devices are used worldwide — that’s 77 percent of the world’s populationSmartphones: 21.8 percent of all mobile devices are smartphones.

Navy SEALs Have a '40 Percent Rule' And It's the Key to Overcoming Mental Barriers Jesse Itzler: I first met "SEAL" at a 100-mile run in San Diego and I was running this race as part of a six-person relay team with friends and he was running the entire race by himself. And the run was unsupported so you have to bring your own supplies. So we had, you know, we overdid it a little bit. We had a tent and we had masseuses and food. The first day that "SEAL" came to live with me he asked me to do — he said how many pull-ups can you do?