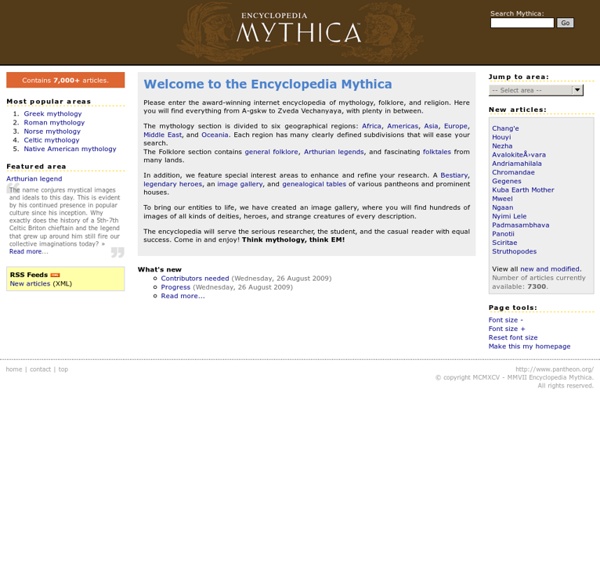 Please enter the award-winning internet encyclopedia of mythology, folklore, and religion. Here you will find everything from A-gskw to Zveda Vechanyaya, with plenty in between. The mythology section is divided to six geographical regions: Africa, Americas, Asia, Europe, Middle East, and Oceania. Each region has many clearly defined subdivisions that will ease your search. The Folklore section contains general folklore, Arthurian legends, and fascinating folktales from many lands. In addition, we feature special interest areas to enhance and refine your research. To bring our entities to life, we have created an image gallery, where you will find hundreds of images of all kinds of deities, heroes, and strange creatures of every description. The encyclopedia will serve the serious researcher, the student, and the casual reader with equal success.

GABRIEL With Michael, Gabriel is mentioned by name in the Book of Daniel, where he explains to Daniel his visions (Dan. viii. 16-26, ix. 21-27). He appears to Zacharias, and announces to Mary that she is about to have a son whose name shall be "Jesus" (Luke i. 19-31). Gabriel is one of the four angels that stand at the four sides of God's throne and serve as guardian angels of the four parts of the globe (Enoch, ix. 1; comp.

Petra: Lost City of Stone Deep within the deserts of Jordan lies the ancient city of Petra. Through a narrow gorge it emerges into view, revealing awe-inspiring monuments cut into the surrounding cliffs. What is this astonishing city? Who built it, and why? When a killer cloud hit Britain When a killer cloud hit Britain - A little over 200 years ago, the eruption of a volcano in Iceland sent a huge toxic cloud across Western Europe. It was the greatest natural disaster to hit modern Britain, killing many thousands - but it has been almost forgotten by history. So wrote Hertfordshire poet William Cowper in the summer of 1783. Across the country, newspapers reported the presence of a thick smog, and a dull sun, "coloured like it has been soaked in blood".

Ancient warrior king statue discovered - Technology & science - Science - LiveScience - NBCNews.com A newly discovered statue of a curly haired man gripping a spear and a sheath of wheat once guarded the upper citadel of an ancient kingdom's capital. The enormous sculpture, which is intact from about the waist up, stands almost 5 feet (1.5 meters) tall, suggesting that its full height with legs would have been between 11 and 13 feet (3.5 to 4 m). Alongside the statue, archaeologists found another carving, a semicircular column base bearing the images of a sphinx and a winged bull. The pieces date back to about 1000 B.C. to 738 B.C. and belong to the Neo-Hittite Kingdom of Patina in what is now southeastern Turkey. They were found at what would have been a gate to the upper citadel of the capital, Kunulua.

The Roman Army Knife The world's first Swiss Army knife' has been discovered and it was made by the ancient Romans around 200 AD. The Roman Army knife is made of silver and has an iron blade. It also has a spoon, fork as well as a retractable spike, spatula and small tooth-pick. Lost city 'could rewrite history' By BBC News Online's Tom Housden The remains of what has been described as a huge lost city may force historians and archaeologists to radically reconsider their view of ancient human history. Marine scientists say archaeological remains discovered 36 metres (120 feet) underwater in the Gulf of Cambay off the western coast of India could be over 9,000 years old. The vast city - which is five miles long and two miles wide - is believed to predate the oldest known remains in the subcontinent by more than 5,000 years. The site was discovered by chance last year by oceanographers from India's National Institute of Ocean Technology conducting a survey of pollution. Using sidescan sonar - which sends a beam of sound waves down to the bottom of the ocean they identified huge geometrical structures at a depth of 120ft.