How to make gift bags from newspaper. When I bought something at a store recently, the clerk handed me my purchase in a bag made from a newspaper. 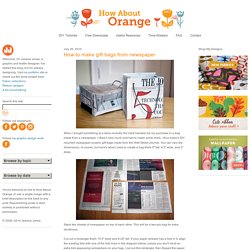 I liked it very much and had to make some more—thus today's DIY recycled newspaper project: gift bags made from the Wall Street Journal. You can vary the dimensions, of course, but here's what I used to create a bag that's 5" tall, 4.5" wide, and 3" deep. Stack two sheets of newspaper on top of each other. This will be a two-ply bag for extra sturdiness. Cut out a rectangle that's 15.5" wide and 8.25" tall. Fold a flap 1.25" down from the top. Cut two pieces of cardstock or chipboard to 4.25" x 1", then glue them on the widest two panels just under the top fold.

Put glue on the outside of the 0.5" tab and bring the left-most panel over to form the body of the bag, aligning the cut edge of the panel with the folded edge of the flap. Fuel cell. Demonstration model of a direct-methanol fuel cell. 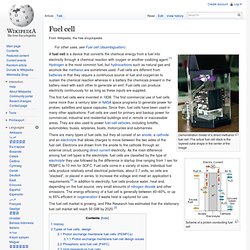 The actual fuel cell stack is the layered cube shape in the center of the image Scheme of a proton-conducting fuel cell The first fuel cells were invented in 1838. The first commercial use of fuel cells came more than a century later in NASA space programs to generate power for probes, satellites and space capsules. Since then, fuel cells have been used in many other applications. There are many types of fuel cells, but they all consist of an anode, a cathode and an electrolyte that allows charges to move between the two sides of the fuel cell.

The fuel cell market is growing, and Pike Research has estimated that the stationary fuel cell market will reach 50 GW by 2020.[3] History[edit] Sketch of William Grove's 1839 fuel cell The first references to hydrogen fuel cells appeared in 1838. In 1939, British engineer Francis Thomas Bacon successfully developed a 5 kW stationary fuel cell. Types of fuel cells; design[edit] SOFC[edit] New cement conducts electricity like metal. 11 Apr 2007 A team of researchers led by professor Hideo Hosono of the Tokyo Institute of Technology has developed a new type of alumina cement that conducts electricity like metal by altering the crystal structure at the nano level. 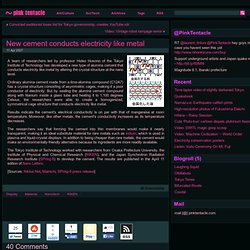 Ordinary alumina cement made from a lime-alumina compound (C12A7) has a crystal structure consisting of asymmetric cages, making it a poor conductor of electricity. But by sealing the alumina cement compound along with titanium inside a glass tube and heating it to 1,100 degrees Celsius, the researchers were able to create a homogenized, symmetrical cage structure that conducts electricity like metal. Results indicate the cement's electrical conductivity is on par with that of manganese at room temperature. Moreover, like other metals, the cement's conductivity increases as its temperature decreases. [Sources: Nikkei Net, Mainichi, SPring-8 press release] Potential environmental impact of nanoparticles studied through aluminum in soil. The Greenhouse Conspiracy - Watch Free Documentary Online - Hilary Lawson. MIT Energy Storage Discovery Could Lead to ‘Unlimited’ Solar Power. Clean Power Published on October 25th, 2008 | by Andrew Williams Researchers at Massachusetts Institute of Technology (MIT) have discovered a new way of storing energy from sunlight that could lead to ‘unlimited’ solar power. 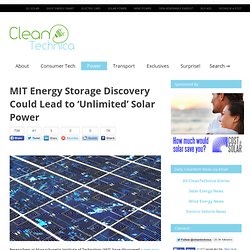 The process, loosely based on plant photosynthesis, uses solar energy to split water into hydrogen and oxygen gases. When needed, the gases can then be re-combined in a fuel cell, creating carbon-free electricity whether the sun is shining or not. According to project leader Prof. Nocera has also explained that the process (video) uses natural materials, is inexpensive to conduct and is easy to set up. Other prominent scientists in the field have rushed to highlight the revolutionary potential of the new process. “This is a major discovery with enormous implications for the future prosperity of humankind. No news has yet been released of a predicted timescale to commericial development or mainstream adoption. Paint Moss Graffiti - Step-by-Step Guides for Offbeat DIY Projects. Make: Projects How-to Projects Library — Electronics, Arduino, Crafts, Solar, Robots.